“Animals” quote taken out of context 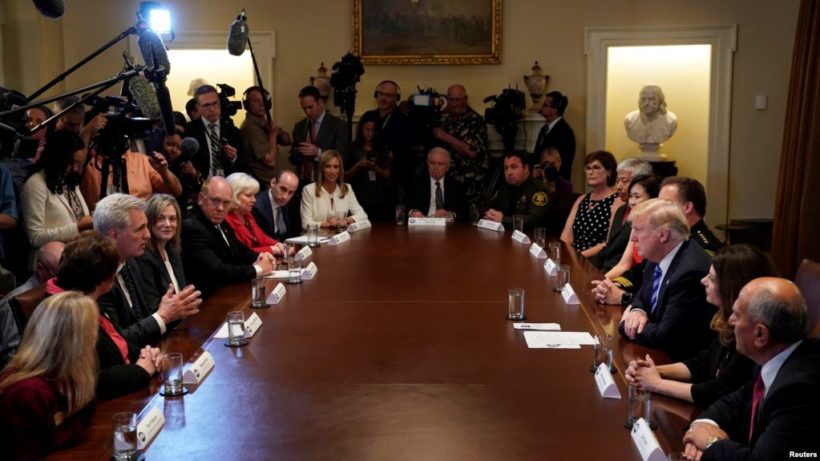 Round-table discussion with state and local leaders on California’s sanctuary laws, May 16, 2018.

You are likely aware of multiple media reports that President Trump described undocumented/illegal immigrants as “animals.” This lie has appeared in multiple news outlets. Taking the president’s quote out of context, The New York Times’ tweet claimed that President Trump called people trying to enter the U.S. illegally “animals.”: That is a flat-out lie. It was repeated by many other major media outlets, including USA Today and the Washington Post.

Instead of reporting the facts, virtually every mainstream media publication and news outlet posted story after story about how Trump called all undocumented immigrants “animals”.

What was not evident from much of the news coverage of the event was that the president made his comments immediately after Fresno County Sheriff Margaret Mims expressed frustration with regulations which prohibit her from alerting ICE to the location of MS-13 gang members.

The day after the misrepresentation of his remark about MS-13 gang members, President Trump even clarified that “I’m referring, and you know I’m referring, to the MS-13 gangs that are coming in.”

After making the same false claim, the Associated Press at least had the decency to delete its false tweet, although they did not clarify the president was referring to the notorious MS-13 gang, writing:

The New York Times, on the other hand, is sticking to its story.

As the AP ultimately admitted, President Trump did not refer to undocumented immigrants as “animals” – he referred to members of the vicious MS-13 gang as “animals.” The context was a White House round table discussion on May 16 at the White House on California’s sanctuary law and its impact on the federal government’s ability to deport violent criminals who are illegally present in the U.S. At the beginning of the discussion, President Trump framed it this way:

Each of you has bravely resisted California’s deadly and unconstitutional sanctuary state laws. You’ve gone through a lot, too, although it’s becoming quite popular what you’re doing. A law that forces the release of illegal immigrant criminals, drug dealers, gang members, and violent predators into your communities.

California’s law provides safe harbor to some of the most vicious and violent offenders on Earth, like MS-13 gang members putting innocent men, women, and children at the mercy of these sadistic criminals. But we’re moving them out of this country by the thousands. MS-13, we’re grabbing them by the thousands and we’re getting them out, Kevin.

The round table had nothing to do with illegal immigrants in general, or “those trying to breach the country’s borders” (the caravaners). This was the president’s reference to animals; again, he obviously was referring to MS-13 gang members:

SHERIFF MIMS: Thank you. There could be an MS-13 member I know about — if they don’t reach a certain threshold, I cannot tell ICE about it.

THE PRESIDENT: We have people coming into the country, or trying to come in — and we’re stopping a lot of them — but we’re taking people out of the country. You wouldn’t believe how bad these people are. These aren’t people. These are animals. And we’re taking them out of the country at a level and at a rate that’s never happened before. And because of the weak laws, they come in fast, we get them, we release them, we get them again, we bring them out. It’s crazy.

Watch the exchange between President Trump and Sheriff Margaret Mims below:

Scarcely a day goes by without the news media lying about the president and his administration. No wonder trust in the press is at an all-time low.

If you still take issue with the fact that Trump called MS-13 gang members “animals,” (as some progressives do) then do a quick Google search on MS-13 and the crimes they’ve committed. Given their brutality, you might even come to the conclusion that calling them “animals” is a generous characterization. (Compiled from powerlineblog by John Hinderaker and the Washington Examiner)

Watch President Trump responding to a reporter’s question the following day, in which the reporter asks him who he was calling “animals”:

1. To take something out of context means to repeat part of what someone has said or written without describing the situation in which it was said, so that it means something quite different. Wikipedia explains take our of context to be when a passage is removed from its surrounding matter in such a way as to distort its intended meaning.

The White House round-table discussion with state and local leaders on California’s sanctuary laws was conducted publicly, with the media present.

Why do you think the major news outlets Associated Press (AP), Washington Post, The New York Times and USA Today all chose to falsely report on President Trump’s remarks?

2. Hundreds of news outlets use AP stories. Although the AP later corrected its false claim, what harm do you think the initial false headlines did to the way undocumented/illegal immigrants view President Trump?

3. Why do you think The New York Times, which is known as “the newspaper of record,” mislead readers into thinking that President Trump called undocumented immigrants “animals” and refused to correct their misrepresentation? Explain your answer.

4. Most people skim headlines before reading whatever draws their attention – and do the same on social media, where we scroll through our Facebook or Twitter feeds and click on whatever catches our interest.

A 2016 academic study of bit .ly links shared on Twitter to BBC, CNN, Fox News, New York Times and Huffington Post articles found that 59 percent of the links were never clicked. And another study of push-through news alerts to mobile phones found that “People click on the alert about half the time.”  So for many casual readers who don’t closely follow the news, all they know about what President Trump said or did is from the headlines and alerts of articles they don’t read.

(Watch the full video of the round table, which was televised by c-span.)

The following is the exchange between Sheriff Margaret Mims and President Trump during the May 16 roundtable on the problems of California’s sanctuary state law:

SHERIFF MIMS: Thank you, Mr. President. You know, sheriffs in California are now in an untenable position when it comes to trying to figure out — now, we have state law, we have federal laws, and here we are stuck in the middle. Sheriffs, especially, because most of us run our county jails.

When there became a legal challenge to the 48-hour holds for ICE, it was very frustrating for us. So what I did is I invited ICE to put their officers in my jails so they’re able to do their work. We didn’t have the staffing to be able to help figure out who they wanted to talk to or didn’t. I said, come on in, work with our people to keep our community safe. Two weeks later, Mr. President, Kate Steinle was murdered.

Now, I wasn’t the only sheriff to do that. Sheriff Youngblood did, Sheriff Christianson. And it was perfect — because we didn’t have to take our time, with our staff, to do anything. ICE was in there doing their work in a safe, controlled, environment. And then, the initiatives started happening — the TRUST Act, the TRUTH Act, and finally, SB 54, the Values Act. And that is causing us all kinds of turmoil.

So here we are, stuck in the middle, trying to decide. We have federal law, we have state law. And that’s why I welcomed Attorney General Sessions’s lawsuit, because that will provide us the clarity that we need and direction that we need. What do we do? Because here we are.

And I appreciated Mr. Homan and ICE. We had a great relationship; we still do. But now ICE is the only law enforcement agency that cannot use our databases to find the bad guys. They cannot come in and talk to people in our jail, unless they reach a certain threshold. They can’t do all kinds of things that other law enforcement agencies can do. And it’s really put us in a very bad position.

THE PRESIDENT: And we’re suing on that, and we’re working hard, and I think it will all come together, because people want it to come together. It’s so ridiculous. The concept that we’re even talking about is ridiculous. We’ll take care of it, Margaret. We’ll win.

SHERIFF MIMS: Thank you. There could be an MS-13 member I know about — if they don’t reach a certain threshold, I cannot tell ICE about it.

THE PRESIDENT: We have people coming into the country, or trying to come in — and we’re stopping a lot of them — but we’re taking people out of the country. You wouldn’t believe how bad these people are. These aren’t people. These are animals. And we’re taking them out of the country at a level and at a rate that’s never happened before. And because of the weak laws, they come in fast, we get them, we release them, we get them again, we bring them out. It’s crazy.

(Read the full transcript at whitehouse.gov)

2. Headlines influence the way we view the news. (Most readers don’t read corrections to news reports.) And after publishing a false headline, the damage has been done. After reading the headlines about President Trump’s roundtable meeting, most undocumented/illegal immigrants will falsely believe President Trump thinks they are “animals” – when he was in fact referring to MS-13 gang members.