Posted on October 15, 2020 in Thursday's Editorial 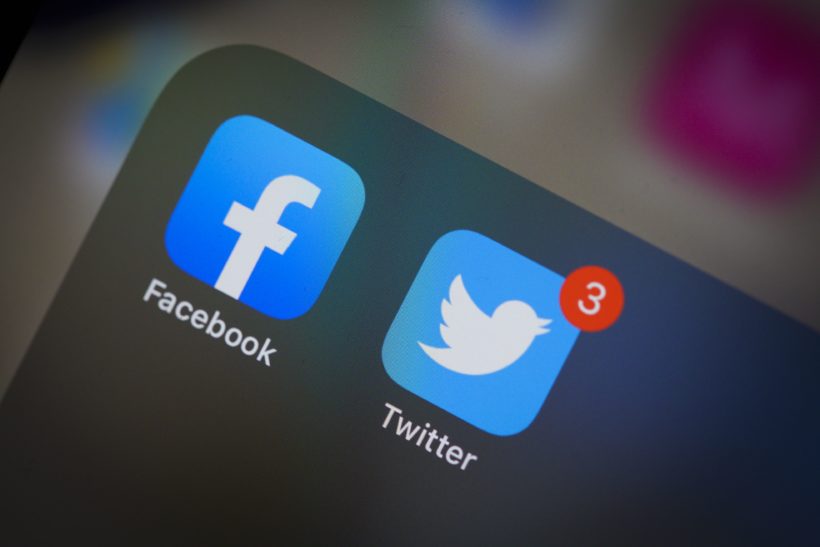 Facebook and Twitter applications are seen on an Apple iPhone 11 Pro Max in The Hague, The Netherlands on March 2, 2020. (Photo by Jaap Arriens/NurPhoto via Getty Images)

(by Congressman Ken Buck, R-Colorado) — …On Wednesday, Twitter blocked users from sharing an article from The New York Post detailing Hunter Biden’s alleged email correspondence. When users attempt to share that news article, Twitter provides this ominous message: “Your Tweet couldn’t be sent because this link has been identified by Twitter or our partners as being potentially harmful. Visit our Help Center to learn more.”

But harmful to whom, exactly? Twitter is not interested in protecting US citizens from physical harm, but, rather, protecting their favored presidential candidate from the harm that would arise from voters learning about his past corruption.

This example of censorship is part of a broader pattern of behavior by Twitter. Just last Friday, Twitter announced new restrictions on speech, this time making it more difficult for users to retweet messages. Users attempting to retweet any message will first be encouraged to add commentary on top of the retweet. Twitter hopes this new step will create additional “friction” and make it less likely that certain information will go viral.

For content with which Twitter disagrees or deems unreliable, the company plans to point users to more “credible” information. A warning message will also appear on the screen with the words “This is in dispute.”

Twitter, of course, intends for that message to read as a loud warning to Americans. “This is in dispute” is meant to dissuade users from proceeding with a retweet. Twitter would benefit from an American history lesson here. “Dispute” and “debate” are hardly ominous warnings in our nation that prizes unfettered political discourse. Our entire political experiment arose from a series of disputes – first with the monarch and then amongst ourselves as we fleshed out every aspect of our new system of governance.

The Federalist Papers could have been subtitled “This Is in Dispute.”

If there were any doubt about the political impetus behind these changes at Twitter, the time-frame for the restrictions informs us that we are witnessing political shenanigans. We learn from The Wall Street Journal that the “change will last at least through the end of the week of the U.S. election.” Twitter, no doubt, is congratulating itself for eliminating what surely must have been an oversight on our founding fathers’ part – freedom of speech at any time of the year, even around an election.

With this move, Twitter joins other progressive causes in the endless quest to shut out speech that challenges the established progressive point of view. John Stuart Mill famously explained the virtues of free speech, which I often share when speaking with college students about the “safe space” ideology that has spread across our nation’s college campuses.

Mill’s defense of free speech is problematic for progressives. His criticism of stifling free speech gets to the heart of the problem with Twitter’s new policy. He points out that if the stifled opinion is right, the public is “deprived of the opportunity of exchanging error for truth.” But if the opinion is wrong, the public loses something almost as important – the benefit of gaining what he calls a “livelier impression of truth” as truth collides with an erroneous viewpoint.

I have become convinced that the underlying reason why progressives fight so hard to shut out speech that challenges them on their positions is that they know they cannot win in that collision between truth and error. Ideas that cannot stand up to scrutiny might appear to be a nuisance, but they serve a valuable purpose in the marketplace of ideas. Alternative viewpoints, demonstrably wrong ideas, and even information “in dispute” all help enliven our political discourse.

Twitter is determined to make its platform a “safe space” in the political conversation before the election. Safe spaces are great for those who want the protection of not being confronted with ideas that are in dispute, or being challenged by ideas that fail to match their own. For the rest of us, though, these so-called “safe spaces” leave something to be desired.

Americans, and our political institutions, have always benefited from robust back-and-forth debates, and even from incorrect, wrong-headed, and nonsensical viewpoints. But Twitter has chosen to adopt the well-established tactics of censors. Where censors in totalitarian regimes take scissors and erasers to viewpoints they find objectionable, Twitter will instead apply a “this is in dispute” warning. The effect will be the same, though.

Ken Buck is a Republican member of Congress from Colorado. He is the author of the newly released book, Capitol of Freedom: Restoring American Greatness.

1. What is the main idea of Congressman Buck’s editorial?

Blockbuster correspondence — which flies in the face of Joe Biden’s claim that he’s “never spoken to my son about his overseas business dealings” — is contained in a massive trove of data recovered from a laptop computer.  …..

Sohrab Ahmari, the Post’s op-ed editor wrote in an editorial “If ‘unreliable’ is the issue, why did social media never block anti-Trump stories?”:

Andy Stone, Facebook’s policy communications manager, said of the Post’s report, “We are reducing [the Post story’s] distribution on our platform.” Before joining the social-media giant, Stone worked for Democratic Sen. Barbara Boxer and the Democratic Congressional Campaign Committee, yet he insisted that Facebook’s action was “part of our standard process to reduce the spread of misinformation.”

Then, Twitter began blocking users from posting the story, with a spokesman telling a Washington Examiner scribe that the move was prompted by “the lack of authoritative reporting on the origins of the materials included” in the report.

…this episode should alarm ­every American. A very few people can unaccountably shape what you read.

This is how freedom dies.

In related news, White House Press Secretary Kayleigh McEnany on Wednesday was locked out of her personal Twitter account for sharing the Post’s report.

Jack Dorsey finally addressed the issue at 6:55 p.m. with the following tweet:

Our communication around our actions on the @nypost article was not great. And blocking URL sharing via tweet or DM with zero context as to why we’re blocking: unacceptable.