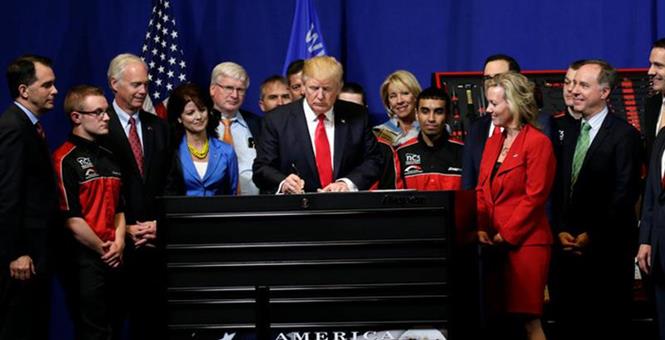 (by Andy Schlafly, Townhall) – It is not enough to “buy American.” It is also important to “hire American,” which means curtailing corporate abuse of the H-1B visa program that gives our good jobs to foreigners.

President Donald Trump traveled to Wisconsin on Tuesday to deliver on his campaign pledge to limit the H-1B visa program that allows employers to bring in lower-cost foreign labor to fill American jobs. President Trump’s new Executive Order to “Buy American, Hire American” starts to roll back the failed policies of his predecessors, which has cost American workers attractive jobs and has driven down wages for everyone.

Despite unemployment rates at or below 5 percent for nearly two years, wages for Americans are actually declining when adjusted for inflation. The average American’s paycheck is less than what it was last year, after inflation is factored in, and many are choosing not to work due to a lack of good-paying jobs, particularly in engineering and manufacturing.

Many engineering jobs have been going to foreigners under the H-1B visa program, which allows corporations to bring in tens of thousands of foreign workers annually to work for less, thereby driving down the wages of all Americans. While there is an official cap to this program of “only” 85,000 workers per year, the law has loopholes that allow employers to ignore the cap and replace many tens of thousands of additional American workers with foreigners. …

The misuse of the H-1B visa program has extended even to Walt Disney World, which has reportedly used it to replace information technology American workers with foreign ones. To add insult to injury, often the laid-off American workers are even told to train their foreign replacements.

If you have a [family member] who dreams of playing major league baseball, his chances are far less today because foreign players are hired instead. More than 25% of the high-paying baseball jobs go to foreigners under P-1 visas not subject to the H-1B visa caps, despite how Japan sharply limits the number of foreign players it allows to play in its major league.

Manufacturer and software developer Snap-on Inc. is located in Kenosha, Wisconsin, right smack in House Speaker Paul Ryan’s district, but he is away on a foreign trip instead. Snap-on welcomes Tuesday’s visit by President Trump instead, to promote “the essential nature of American manufacturing to our nation’s future.”

Essential indeed. Without renewed growth in good manufacturing and technology jobs, America will continue to decline economically, with [the] middle-class…hit the hardest.

President Trump is ordering the Secretary of Commerce to review provisions in the harmful “free trade” agreements, to close loopholes on this issue. Trump’s directive will also require reforms of the H-1B visa program to limit bypassing skilled American workers.

Corporations prefer foreign workers because they become like the indentured servants of colonial America, who were unable to leave their master for seven years under threat of being shipped back to where they came from. H-1B visas tie the workers to the companies that brought them into our country, which reduces competition and harms the free market.

The H-1B visa racket is not true free enterprise, and it is not healthy for the United States. President Trump’s action in Wisconsin is a good first step, and Congress should take the cue and repeal this program entirely. …

Only 71 percent of young adults, aged 25 to 34, who did not go to college were employed in 2016, and only about 85 percent of their counterparts who hold college degrees had a job. Moreover, many of those who had a job were paid low wages in the retail or food industries.

Donald Trump was the first Republican presidential candidate to win Wisconsin in more than 30 years, as part of his historic sweep of the Rust Belt states. The Badger State is the perfect place to begin reducing the flow of American jobs to foreigners.

Originally published April 19, 2017.  Reprinted here on April 20, for educational purposes only. May not be reproduced on other websites without permission from Townhall.

2. What is the main idea of Mr. Schlafly’s commentary?

3. Ask a parent: do you agree with the assertions made by Mr. Schlafly in his commentary? Please explain your answer.