Trump’s bipartisan politics only surprising because of Obama

Posted on September 21, 2017 in Thursday's Editorial 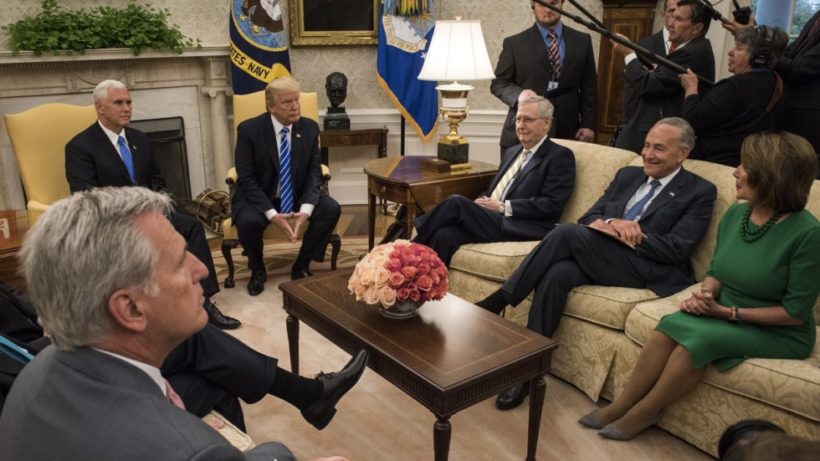 (by Michael Goodwin, New York Post) – The biggest surprise in President Trump’s willingness to work with Democrats is how much of a surprise it is to much of America. Expressions of shock are coming from all corners, suggesting that many of us view fierce polarization as normal and bipartisanship as abnormal.

If so, add that to the legacy of Barack Obama. He was the ultimate my-way-or-the-highway president.

That was four years before his own presidential election, but soon after getting to the Oval Office, Obama made it clear he would govern strictly as a liberal. He famously rebuffed GOP attempts to get their ideas into the stimulus package, saying bluntly, “I won.”

Democrats had big majorities in both chambers, and straight party-line votes quickly became the order of the day. With the GOP united in opposition, the president and his media handmaidens took to calling Republicans obstructionists for not getting on board with his big-government programs. It apparently never occurred to them that Obama was not living up to his own promise to be a unifier.

Subsequent studies showed the effect, with Pew Research reporting in 2014 that “Republicans and Democrats are more divided along ideological lines — and partisan antipathy is deeper and more extensive — than at any point in the last two decades.”

That “partisan antipathy” was on full display during the 2016 race, and when Republicans won both houses of Congress as well as the White House, many conservatives were euphoric. Now the GOP had turned the tables and would govern without Democratic help.

The air has been leaking out of that balloon almost since Inauguration Day, and Trump’s deal with Dem leaders (like New York Sen. Chuck Schumer) ends the illusion. Already he is talking tax reform with both parties, making it clear he hopes to make more bipartisan deals.

Republicans who are horrified must have been sleeping for the last six months. Did they miss the infighting in their party that made it almost impossible to pass big legislation?

More importantly, Trump’s decision to work with Dems is good for the nation, and could even help Republicans avoid self-destruction.

Again, the example of Obama and Democrats makes the case.

The coercive liberalism that came to define Obama’s presidency cost the party dearly. First the House went to the GOP in 2010, then the Senate in 2014. Any time Obama’s name wasn’t on the ballot, his party got thumped.

By 2016, Republicans were sweeping elected offices at all levels, and Dems, after losing about 1,000 seats over four elections, were at their weakest position in a century.

That reversal, I believe, was a direct result of Obama’s failure to govern as the president of all Americans. He was a liberal Democrat, first, last and always, and he resorted to executive orders rather than compromise with Congress.

That approach makes him an outlier in modern history, with the most successful presidents achieving big legislative victories with votes from both parties.

Lyndon Johnson, Ronald Reagan and Bill Clinton were able to get big things done with bipartisan coalitions, even when the other party controlled Congress. Indeed, Johnson got a higher percentage of Republican votes for most of his Great Society programs than he got from Democrats. And Clinton could boast of a balanced budget because Newt Gingrich’s House forced it on him.

If Trump is looking for a model of how to govern, Obama offers the worst possible lesson. His signature achievements, ObamaCare and the Iran nuclear deal, were both sold on lies, and both are failing.

That history ought to console Republicans. If they try to ram too many big ideas through without Dem votes, they are more likely to lose control at the next election. Time and again, Americans show they want divided government, believing sensibly that both parties need to have their power checked by the other.

By themselves, efforts at bipartisanship are no guarantee of success, and Trump could be stymied by irreconcilable demands from both parties. But history consistently rewards those presidents whose leadership produces results that reflect a broad consent of the governed.

Published September 12, 2017 at The New York Post. Reprinted here on September 21 for educational purposes only.

1. The purpose of an editorial/commentary is to explain, persuade, warn, criticize, entertain, praise or answer. What do you think is the purpose of Mr. Goodwin’s editorial? Explain your answer.

3. In his commentary Mr. Goodwin makes the following assertions:

“If Trump is looking for a model of how to govern, Obama offers the worst possible lesson. His signature achievements, ObamaCare and the Iran nuclear deal, were both sold on lies, and both are failing.” (para. 17)

“Time and again, Americans show they want divided government, believing sensibly that both parties need to have their power checked by the other.” (para. 18)

a) Do you agree with each/either assertion? Explain your answers.
b) Ask a parent the same question. Discuss your answers.

Read the text of President Trump’s comments in the bipartisan meeting with congreesional leaders at whitehouse.gov.

Watch the meeting below or at the WhiteHouse youtube page.