Posted on November 17, 2016 in Thursday's Editorial 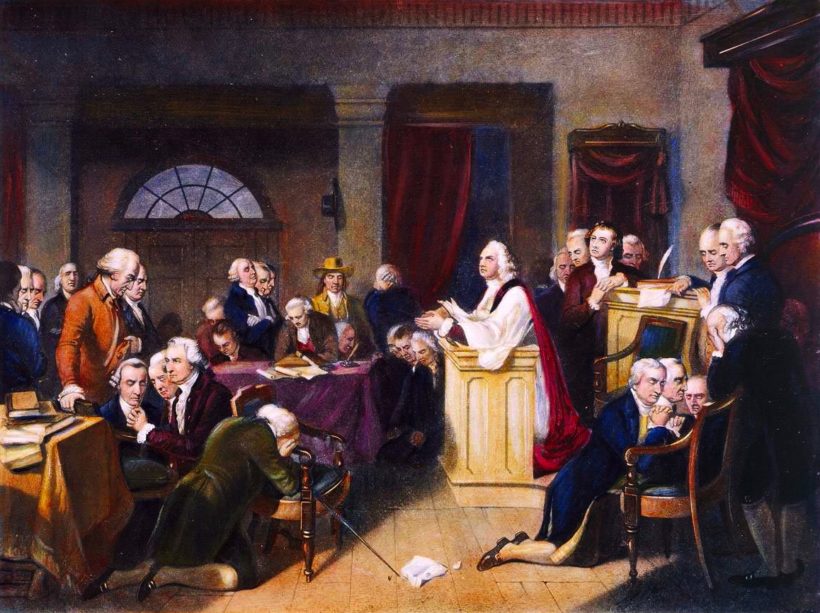 (by Seth Lipsky, NYSun) – …Let us begin Thanksgiving morning with a reflection on the object of all this gratitude: Whom do we thank? Is it the Indians? The Pilgrims? Nature? Fortune?

It turns out that the record is long, clear, and official. It goes back to George Washington’s first Thanksgiving proclamation, issued on Oct. 3, 1789, here at New York. He called for a day of public prayer and thanksgiving — to God.

Congress, Washington noted, had requested that he recommend to the people that the day “be observed by acknowledging with grateful hearts the many signal favors of Almighty God.” He set aside Thursday, Nov. 26, 1789.

…In 1795, Washington turned around and asserted that it is “our duty as a people, with devout reverence and affectionate gratitude, to acknowledge our many and great obligations to Almighty God.”

In 1798, John Adams issued a corker of a Thanksgiving proclamation that referred to the “Redeemer of the World.” It culminated in a recommendation that “the duties of humiliation and prayer be accompanied by fervent thanksgiving to the Bestower of Every Good Gift.”

Thomas Jefferson was one of the presidents who shrank from issuing a Thanksgiving proclamation. But in 1789, as governor of Virginia, he did establish December 9 as a day of thanksgiving to God.

And President James Madison set aside Jan. 12, 1815, as a day for Americans’ “voluntarily offering” in “their respective religious assemblies” their “humble adoration to the Great Sovereign of the Universe,” confessing their sins and “strengthening their vows of repentance.”

Abraham Lincoln issued four Thanksgiving proclamations, including one that reckoned America’s bounties were so extraordinary “that they can not fail to penetrate and soften even the heart which is habitually insensible to the ever-watchful providence of Almighty God.”

In 1864, he set apart the last Thursday in November “as a day which I desire to be observed by all my fellow-citizens, wherever they may then be, as a day of thanksgiving and praise to Almighty God, the beneficent Creator and Ruler of the Universe.” Written by Abraham Lincoln in 1864 (Document: The National Archives).

President Ulysses S. Grant recommended that all Americans “assemble” in “their accustomed places of public worship and to unite in the homage and praise due to the bountiful Father of All Mercies.” (That was one of Washington’s famous phrases for God.)

Decades later, Theodore Roose­velt “brought to his Thanksgiving proclamations some of the progressive spirit he brought to his presidency,” according to The New York Sun (from whose annual Thanksgiving editorials many of these quotes are drawn).

Americans could “best prove our thankfulness to the Almighty by the way in which . . . each of us does his duty to his fellow-men.”

And Franklin Roosevelt recognized God as an ally in war. “God’s help to us had been great in this year of march toward world-wide liberty,” FDR wrote in his 1943 Thanksgiving proclamation. A year later he suggested “a nationwide reading of the Holy Scriptures during the period from Thanksgiving to Christmas.”

In 1950, Harry Truman became the first president to reference Jews in his Thanksgiving proclamation, entreating Americans “in church, chapel, and synagogue, in their homes and in the busy walks of life, every day and everywhere, to pray for peace.”

Dwight Eisenhower wrote of American gratitude “that each of us can worship God in his own way.” JFK wrote that America was born “in the conviction that right and justice and freedom can through man’s efforts persevere and come to fruition with the blessing of God.”

Richard Nixon’s proclamation was probably the first to mention Jesus: “From Moses at the Red Sea to Jesus preparing to feed the multitudes, the Scriptures summon us to words and deeds of gratitude, even before divine blessings are fully perceived,” he wrote.

This column first appeared in the New York Post. Posted at NYSun .com on November 27, 2014.  Reprinted here November 17, 2016 for educational purposes only. May not be reproduced on other websites without permission from the New York Sun. Visit the website at NYSun.com.

1.  The purpose of an editorial/commentary is to explain, persuade, warn, criticize, entertain, praise or answer. What do you think is the purpose of Seth Lipsky’s editorial? Explain your answer.

3.  In his 1944 presidential Thanksgiving Proclamation, President Franklin D. Roosevelt suggested “a nationwide reading of the Holy Scriptures during the period from Thanksgiving to Christmas.”  Why is this good advice for Americans today?  Explain your answer.