Posted on March 8, 2018 in Thursday's Editorial 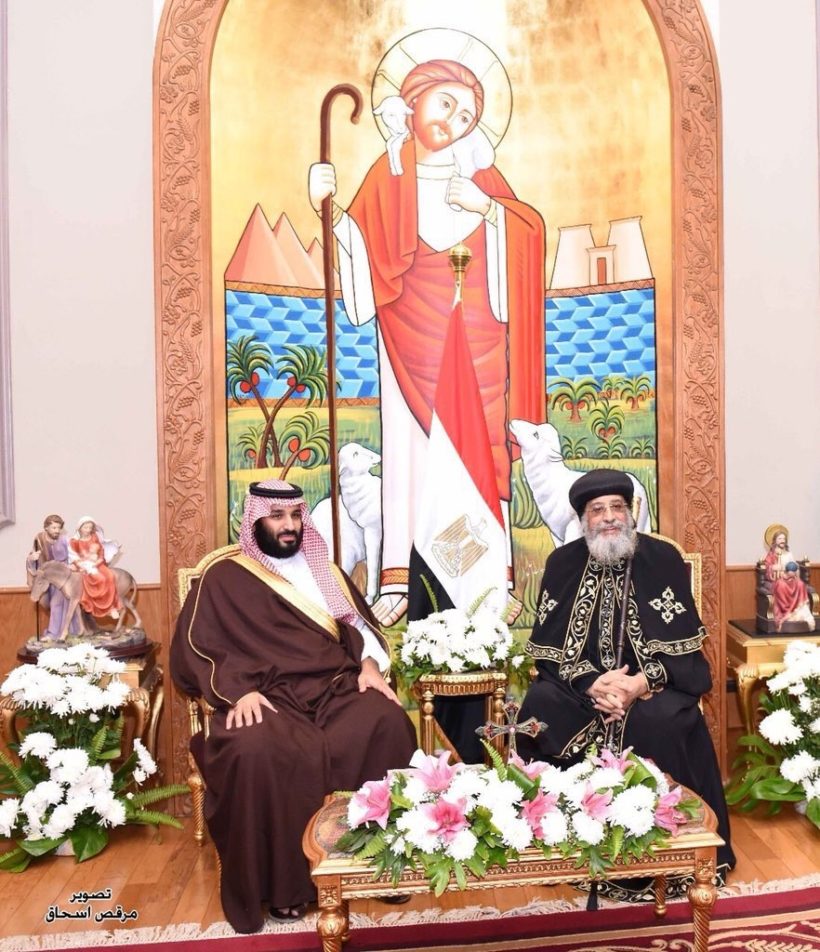 This picture, with MbS under a picture of Jesus and meeting with the Coptic pope, is a potent symbol of where the winds are blowing in the former home and treasurer of the Islamist movement.

(by Thomas Lifson, AmericanThinker) – It is hard to overstate the significance of a hugely symbolic move by the reformist crown prince of Saudi Arabia, Mohammed bin Salman (MBS).  American media mostly are clueless about religion and lack any understanding of the momentous changes underway in the Kingdom of Saudi Arabia. …

The mainstream media have little interest in extolling the world-historical transition underway in the nation that is pre-eminent in Sunni Islam, the Guardian of the Holy Cities of Mecca and Medina, and which has been the moneybags for radical jihadists for three generations.

This move, as recorded by the Saudi-owned Al Arabiya network, is startling and highly important:

Saudi Arabia’s Crown Prince Mohammed bin Salman has arrived at the St. Mark’s Coptic Orthodox Cathedral in Cairo in an historic visit to the church.

Earlier in the day, the prince visited the office of the Al-Azhar Sheikh.

In the evening, the Saudi Crown Prince and Sisi will see an improvisation theater show at Cairo’s Opera House focused on correcting destructive ideas and fighting terrorism.

A second dispatch from Al Arabiya includes the crown prince’s invitation to Copts to visit Saudi Arabia.  Egypt’s Coptic population is under siege by murderous Islamists, so the signal that they are to be treated as guests is vital.  Arab culture places a tremendous emphasis on being a gracious host, and re-classifying Copts from the category of “infidels” worthy of scorn and persecution to welcome “guests” is powerful:

Speaking to Egyptian media after the visit the head of the Egyptian church, Pope Tawadros II said: “In the name of the Coptic Orthodox church we welcome Prince Mohammed’s visit to his second country Egypt.

“Prince Mohammed spoke a lot of his affection for the Copts,” the Pope said, adding that the kingdom’s heir to the throne invited him and all Copts to visit Saudi Arabia.

The two men walked together through St Mark’s Cathedral, in what Egypt’s state news agency described as the first tour of its kind.

The visit came on the second day of the Saudi Crown Prince’s visit to Egypt – his first foreign visit since he became heir to the throne. …

The visit to Al-Azhar is crucial.  Simply stated, MBS is seeking to defang Muslim extremists who seek to destroy Christianity in Arab- and Muslim-majority countries.  Garnering support from the most respected source of Islamic scholarship (no doubt accompanied by the offer of funds from the Saudi treasury) is the carrot to be used in persuading Wahhabi clergy to change their preaching, with the denial of Saudi funds to recalcitrant advocates of armed jihad supplying the stick.

The visit isn’t entirely symbolic, though.  Reuters reports that “[t]he two countries on Sunday set up a $10 billion joint fund to develop a planned mega-city.”

This new city, called Neom, will be built at the top of the Red Sea, where Egypt’s, Israel’s, Jordan’s, and Saudi Arabia’s borders meet.

It is planned to be a free city or open city, where Saudis can live a fully modern 21st-century life, freed of Islamic religious regulations that will be gradually relaxed elsewhere in the kingdom.  In addition, nationals from Jordan, Egypt, and Israel can enter and work there in planned high-technology investments.  Its isolation from the rest of Saudi Arabia will allow it to be different and to become a magnet for Saudis – males and females – who wish the free of the shackles of pious Muslim life.

Alongside posters urging people to vote for Sisi, large banners were put up in central Cairo on Monday with images of the Egyptian president, Prince Mohammed and Saudi King Salman bin Abdulaziz.  “Welcome to your second country,” said one; another read “Saudi and Egypt are one hand, one nation.”

Reforming Islam to reconcile it with modern, technological societies based on free will is one of the most important tasks for the world to accomplish.  These moves by MBS make it clear that he is betting his career and indeed his life on accomplishing that task. 2. During a conference in October 2017, Saudi Arabia’s crown prince vowed to destroy “extremist ideologies” in a bid to return to “a more moderate Islam.” Speaking at the Future Investment Initiative conference in Riyadh, Crown Prince Mohammed bin Salman said the moves will put the kingdom in lockstep with many other nations as it seeks to transform its economy over the coming decades. “We want to lead normal lives, lives where our religion and our traditions translate into tolerance, so that we coexist with the world and become part of the development of the world.” What is your reaction to MBS’ statements? – Do you think Saudi Arabia will ever be a country that allows Christians (and women) the same rights as Muslim men? Explain your answer.