Posted on December 13, 2018 in Thursday's Editorial 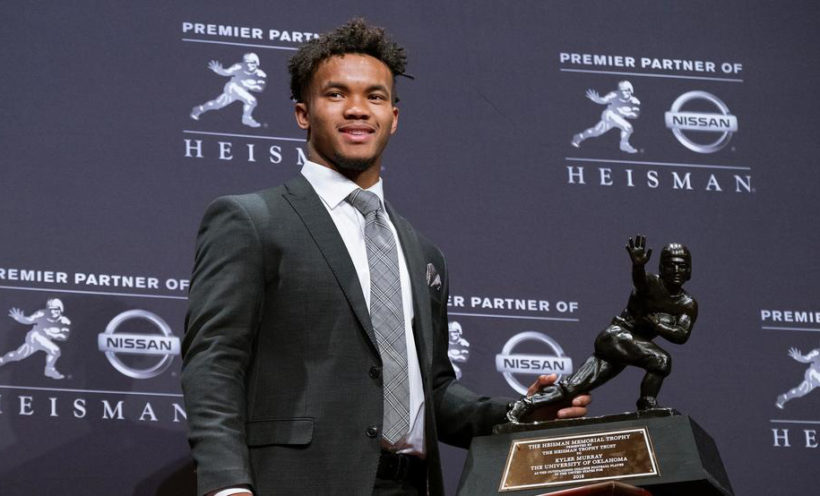 This was LOW even for the media: USA Today smears Heisman Trophy winner Kyler Murray.
In a report published late Saturday night, just after Murray won the Heisman, USA Today dug up several tweets and claimed that Murray had made homophobic statements on Twitter. [In one instance 7 years ago, Murray tweeted “I don’t even know what you two queers are talking about. I got both of y’all. Especially you.”

(by Michelle Malkin, RealClearPolitics) – This week, I did something that USA Today’s executive leadership apparently hadn’t done lately: I read the newspaper’s “principles of ethical conduct for newsrooms.”

[The guidelines] apply to all employees….Whether writing online or covering breaking developments, USA Today’s journalists are supposedly committed to:

Now, let’s compare the lofty rhetoric with [the] reality. On Sunday, 21-year-old University of Oklahoma quarterback Kyler Murray won the Heisman Trophy. He gave a gracious, emotional speech that celebrated his faith in God, respect for his fellow athletes, love of family, lifelong work ethic, and team spirit.

“I’ve worked my whole life to fulfill my goals, but at the same time, I know there’s a higher power looking down on me. He enables me to do all things. For that I’m grateful — for the many blessings that God has blessed me with,” Murray humbly told reporters.

But one reporter wasn’t interested in covering the actual news of the Heisman winner’s triumph. He was interested in sabotaging it. Within hours of the press conference, USA Today sports writer Scott Gleeson penned an article attacking Murray for posting “tweets using an anti-gay slur.” Murray and family awoke Monday morning to a barrage of character smears slamming his “homophobic” posts from six years ago — when Murray was 14 or 15 years old and jokingly called his friends “queer.” Google is now clogged with wall-to-wall coverage of his teenage [tweets] from CNN to The Today Show to every sports outlet…. Who “resurfaced social media’s memory?” Why, it was Gleeson himself! By creating an illusion that Murray’s schoolboy tweets were the subject of any scrutiny and outrage other than Gleeson’s own, USA Today gave us a shining example of the manufacturing of fake news. …

Indeed, Gleeson’s own biography is one of a social-justice advocate dedicated to identity-politics propaganda. ” My enterprise and human interest work on the LGBT movement in sports made me an APSE award finalist in 2016 and a USBWA award winner in 2017,” Gleeson boasts. Was he aiming for another award with his ambush of Murray? Gleeson certainly got his new scalp and paraded it prominently, with aiding and abetting by USA Today‘s silent, AWOL editors. Within hours of publication, Murray had apologized.

“Kyler Murray apologizes for homophobic tweets that resurfaced after he won Heisman Trophy.”

On Tuesday, I wrote to USA Today‘s editor in chief Nicole Carroll and executive editor for news Jeff Taylor with the following questions:

The editors have not responded yet. In the meantime, I have more questions.

How does lying in wait in for unknown months or years (when Gleeson could have “resurfaced” the old tweets at any time) and publishing a smear in the middle of the night before giving Murray a chance to respond comport with the newspaper’s promises that:

Will the editors respond publicly to criticism and address readers and employees so that their actions match these words?

The Heisman Trophy is awarded annually to a college football player for outstanding performance “which best exhibits the pursuit of excellence with integrity. Winners epitomize great ability combined with diligence, perseverance, and hard work.”

2. a) What is the main idea of this editorial?
b) Do you agree with commentator Michelle Malkin? Explain your answer.

3. Most news reports on the tweets Kyler Murray wrote to friends when he was 14 referred to them as “homophobic” or “anti-gay.” Should a person be labeled homophobic for calling friends queer in a tweet between friends? Explain your answer.

5. Watch the videos under “Resources” below the questions. What two adjectives do you think best describe Kyler Murray? (e.g. arrogant, humble, aggressive, polite, grateful, a man of integrity…). Explain your answer.

6.  Ask a parent: people seem to be taking offense over lots of things – has ‘taking offense’ and ‘being offended’ gotten out of hand? Please explain your answer.