Posted on February 11, 2016 in Thursday's Editorial 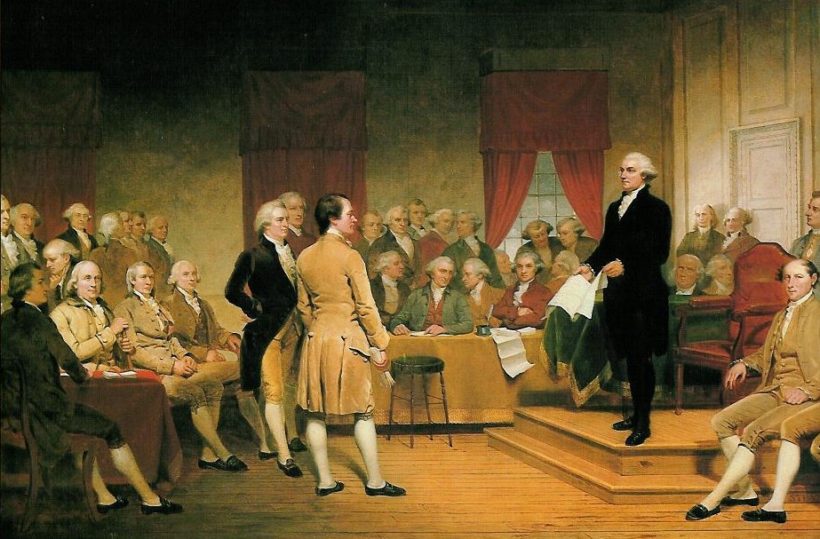 George Washington Is Elected President of and Presides Over the Constitutional Convention, 1787

(by Scott Johnson, PowerLineBlog) — February 22 is the anniversary of the birth of George Washington. Of all the great men of the revolutionary era to whom we owe our freedom, Washington’s greatness was the rarest and the most needed. [So many years later] it is also the hardest to comprehend.

Take, for example, Washington’s contribution to the Constitutional Convention of 1787. Washington’s mere presence lent the undertaking and its handiwork the legitimacy that resulted in success. The convention’s first order of business was the election of a presiding officer. Washington was the delegates’ unanimous choice.

Presiding over the convention during that fateful summer, Washington said virtually nothing. In his wonderful book on Washington, Richard Brookhiser notes: “The esteem in which Washington was held affected his fellow delegates first of all…Washington did not wield the power he possessed by speaking. Apart from his lecture on secrecy, Washington did not address the Convention between the first day and the last.”

The esteem in which he was held by his fellow citizens was similarly crucial to the implementation of the Constitution during his presidency. In 1790 Rhode Island became the thirteenth state to ratify the Constitution. To mark the occasion, President Washington made a ceremonial visit to Newport when Congress recessed in August. Newport welcomed Washington with open arms. In Newport on August 18, according to James Thomas Flexner, Washington “completely fatigued the company” by briskly walking…from nine in the morning until one in the afternoon.

In anticipation of Washington’s visit to Newport, the members of America’s oldest Jewish congregation prepared a letter welcoming Washington for presentation to him at a public event on the morning of August 18. The letter was authorized by the congregation’s board and signed by its president, Moses Seixas. It is Washington’s magnificent letter responding to Seixas that is known as a testament to religious freedom and that has become famous as one of the classic statements of religious toleration in America.

Permit the children of the stock of Abraham to approach you with the most cordial affection and esteem for your person and merits — and to join with our fellow citizens in welcoming you to NewPort.

With pleasure we reflect on those days — those days of difficulty, and danger, when the God of Israel, who delivered David from the peril of the sword, — shielded Your head in the day of battle:  and we rejoice to think, that the same Spirit, who rested in the Bosom of the greatly beloved Daniel enabling him to preside over the Provinces of the Babylonish Empire, rests and ever will rest, upon you, enabling you to discharge the arduous duties of Chief Magistrate in these States.

Deprived as we heretofore have been of the invaluable rights of free Citizens, we now with a deep sense of gratitude to the Almighty disposer of all events behold a Government, erected by the Majesty of the People — a Government, which to bigotry gives no sanction, to persecution no assistance — but generously affording to all Liberty of conscience, and immunities of Citizenship: deeming every one, of whatever Nation, tongue, or language equal parts of the great governmental Machine:

This so ample and extensive Federal Union whose basis is Philanthropy, Mutual confidence and Public Virtue, we cannot but acknowledge to be the work of the Great God, who ruleth in the Armies of Heaven, and among the Inhabitants of the Earth, doing whatever seemeth him good.

For all these Blessings of civil and religious liberty which we enjoy under an equal benign administration, we desire to send up our thanks to the Ancient of Days, the great preserver of Men beseeching him, that the Angel who conducted our forefathers through the wilderness into the promised Land, may graciously conduct you through all the difficulties and dangers of this mortal life:  And, when, like Joshua full of days and full of honour, you are gathered to your Fathers, may you be admitted into the Heavenly Paradise to partake of the water of life, and the tree of immortality.

Done and Signed by order of the Hebrew Congregation in NewPort, Rhode Island August 17th 1790.

Today, as we contend with the contemporary equivalent of “the Babylonish empire,” let us send up our thanks to the Ancient of Days for this indispensable man.

2. The purpose of an editorial is to explain, persuade, warn, criticize, entertain, praise, exhort or answer. What do you think is the purpose of this editoral? Explain your answer.

3. Tone is the attitude a writer takes towards his subject: the tone can be serious, humorous, sarcastic, ironic, inspiring, solemn, objective, cynical, optimistic, encouraging, critical, enthusiastic…  Which word do you think best describes the tone of Mr. Johnson’s commentary?  Explain your answer.