Not so Golden Globes

Posted on January 12, 2017 in Thursday's Editorial 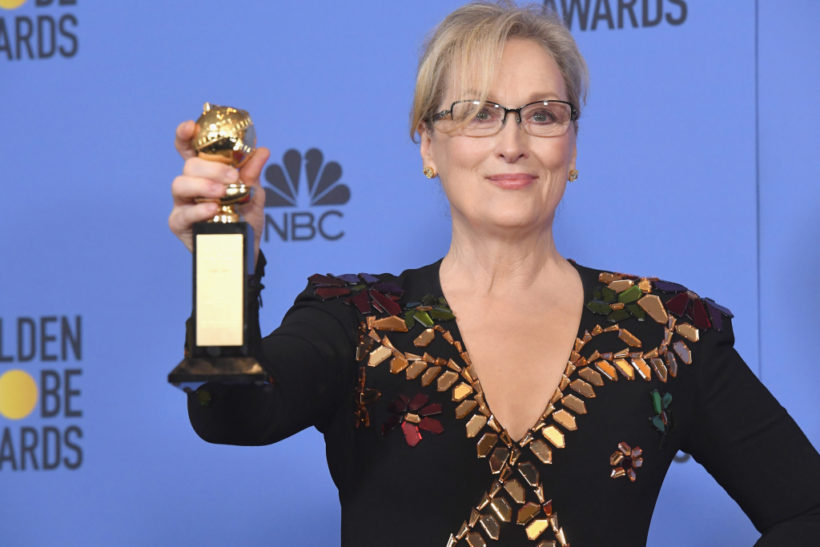 Actress Meryl Streep, recipient of the Cecil B. DeMille Award, poses in the press room during the 74th Annual Golden Globe Awards at The Beverly Hilton.

(by Cal Thomas, Jewish World Review) – Meryl Streep has played many roles in her long career and holds the record for the most Academy Award nominations of any actor. Among her portrayals was British Prime Minister Margaret Thatcher. At the Golden Globe Awards Sunday night, Streep behaved as if she actually had been elected to high office, entitling her to mount a high horse.

In a six-minute, post-election diatribe, Streep slammed president-elect Donald Trump, urging journalists to hold him accountable. Given the media’s poor job of holding the current president accountable, Streep’s call to arms seems like an invitation to a one-way street. Accountability is one thing. Extreme bias is quite another and mainstream media has been nothing if not biased against Donald Trump, most of his cabinet nominees and family members.

I stopped going to movies years ago because I grew tired of their political agendas, the profanity, the sex scenes and blasphemies. As a member of the Screen Actors Guild and the American Federation of Television and Radio Artists (SAG-AFTRA), I am sent DVDs of the Oscar-nominated films, which I can watch at home, if any interest me.

The first one I received this year was “Manchester by the Sea.” After counting more than a dozen uses of the f-word in the first 15 minutes, I ejected it from my DVD player. Screenwriters actually think average people talk like this. I’ve been around enough entertainers to know this is mostly untrue. Filmmakers inhabit a fantasy world, and for many of them fantasy is reality.

The Golden Globes, like the Oscars, are full of the self-aware (no wonder they worship President Obama, perhaps the most self-aware president in history). They’re happy to mock the values of “fly-over country,” even as they hope people they condescendingly view as “hicks” and worse, Republicans, will buy tickets to see their films.

These elitists arrive at ceremonies at which people of like mind give each other awards for being like-minded. How can they identify with Americans who live paycheck to paycheck? Many hang out with left-wing politicians, who also live in their own fantasy world, as out of touch with real Americans as they are. These overrated actors, who are shadows compared to Hollywood’s Golden Age, seemingly believe they set the agenda for the nation. Anyone who has a different view is regarded as trespassing on their territory.

These actors produce little of lasting value. The A-listers among them attend White House functions — mostly during Democratic administrations — and get so upset at the prospect of a Republican victory that they threaten to leave the country should the Republican win. Sadly, they never leave. Where else could so many who have contributed so little to better society be paid so much?

The arrogance, superiority and hypocrisy of these overrated people is astounding. Many campaign against guns while enjoying the protection of armed security guards. Others, like Leonardo DiCaprio, are apostles of “climate change,” but fly on private jets and ride in SUVs, which pollute the air. Most favor abortion rights while clamoring for compassionate treatment of the weakest among us. They endorse same-sex marriage while marrying members of the opposite sex multiple times, mocking the practice (Streep is a notable exception).

There was one redeeming moment at the Golden Globes. It was the tribute to Debbie Reynolds and her daughter Carrie Fisher, who died last month one day apart.

Something Carrie Fisher said in her book and on her HBO special “Wishful Drinking” should serve as a warning to these elitists, who ostentatiously sport expensive clothes and jewelry: “Celebrity is obscurity biding its time.”

There is a difference between a celebrity and a star. If you’re not old enough to know what real stars looked like, I again refer you to Hollywood’s Golden Age, where actors kept their clothes on, didn’t swear or have sex on screen and held the attention of audiences by the superior quality of their work.

Many old films are watchable today. Some are considered classics. I doubt most of today’s films will be worth watching in 50 years. They aren’t now.

2. Tone is the attitude a writer takes towards his/her subject: the tone can be serious, humorous, sarcastic, ironic, inspiring, solemn, objective, cynical, optimistic, critical, enthusiastic…etc.  Which word do you think best describes the tone of Cal Thomas’ commentary?  Explain your answer.