North Korea: How the Discussion Was Changed

Posted on March 7, 2019 in Thursday's Editorial 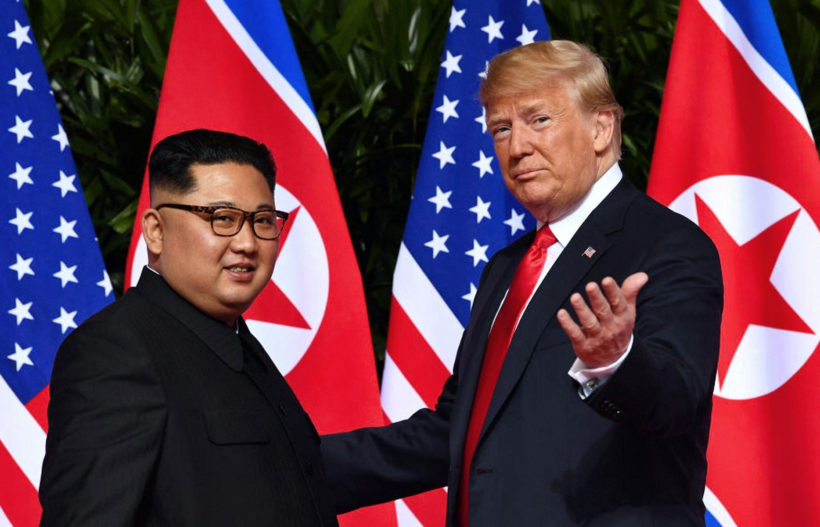 (by Peter Huessy) – The rationale for the summits between US President Donald Trump and North Korea’s Chairman Kim Jong-Un may well be misunderstood by the critics of the American administration. By meeting with the North Korean leader, the administration is seeking to change the accepted narrative about the Korean peninsula and Western Pacific, just as it has with respect to the Middle East.

In the Middle East, for instance, the “Peace Process” tail has, for decades, wagged the Middle East dog — with the Palestinian Authority (PA), previously the PLO, having near veto power over US policy in the region. So central was this to America’s thinking that former US President Bill Clinton said in 2010, if Israel simply provided the Palestinians with a state, most terrorism would go away — as if the grievance of Muslim terrorists about not yet having a Palestinian state explains their wholesale murder of fellow Muslims, to say nothing of Christians, Israeli civilians and Americans, murdered in literally countless Islamic terror attacks.

President Trump has rejected this Middle East framework or narrative. He declared Jerusalem the capital of Israel, moved the US Embassy there, ordered the closure of the PLO office in Washington, quickly decimated ISIS, and cut significantly the funding for United Nations Relief and Works Agency (UNWRA).

This UN agency, founded shortly after World War II, has still some 75 years later not settled “Palestinian refugees.” Now decades later, the children, grandchildren and great-grandchildren of these refugees, as well as Arabs drawn from throughout the Middle East, are kept in slums and barrios from which a ready pool of terrorists can be drawn.

President Trump then also put together an informal alliance of Gulf states, particularly the United Arab Emirates, Saudi Arabia and Egypt, to be joined by Israel and the United States, to challenge Iran, which, as the world’s worst state sponsor of terrorism, was finally the primary focus of United States concern.

The administration withdrew from the Iran “nuclear deal” (JCPOA); Iran was not living up to its obligations under the agreement, anyway. Contrary to promises of changed Iranian behavior, Iran, since the 2015 JCPOA, has aggressively increased its funding for terror, including to Hezbollah, Hamas, and Islamic Jihad, increased its funding and arms shipments to the Islamic jihadis in Yemen, and has accelerated its ballistic missile programs while making significant strides in nuclear weapons technology capability, as just recently outlined in a February 25 report by the Institute for Science and International Security.

The administration has similarly sought to change foreign policy conventional wisdom about the nuclear threat from North Korea. To do this, the administration first had to cement the US relationship with its ally, the Republic of (South) Korea, and underscore (not hide) the central role of China in the ongoing hostile policy of North Korea in the region.

Second, President Trump had to assert that the US was in the business of deterring North Korea, not the other way around. Trump’s comment about having a really big “nuclear button” was not just macho bragging, but a statement of fact: no longer would the US tolerate North Korean attacks near or on the US, Japan or South Korea — whether bombings, cross-border commando raids, sinking Navy vessels, shelling villages or grabbing American ships. such as the USS Pueblo.

The Trump administration was sending a very strong message that the US would no longer be silent in the face of North Korean threats to turn Seoul or Los Angeles into a sea of fire. …

Third, the administration needed to seek an immediate end to North Korea’s practice of testing ballistic missiles over South Korea and Japan, as well as testing nuclear weapons, and threatening Hawaii, Guam or the US mainland with “merciless” strikes.

Fourth, the US secured the deployment in South Korea of a THAAD missile defense battery while also increasing by $60 million annually South Korea’s support for American troops. The administration now can point to the additional South Korean support when going to the American people and asking, for its own military forces, greater defense spending, which over the past two years has been significant. That quid pro quo underscores the commitment the administration has made to the US-South Korean alliance.

Fifth, having cemented the US-South Korean alliance, a message was sent to North Korea that nothing is going to undermine that relationship and American soldiers are going to remain on the peninsula, contrary to the recurring demands of North Korea and China that all US troops leave.

Sixth, the administration has suggested an alternative economic vision for North Korea, which, situated between three economic powerhouses — China, South Korea and Japan — could become (certainly in relative terms) economically far better off than it is today. Critics may be right that such a deal is not possible. It may be that the North Korean leadership wants only to survive, keep its nuclear weapons, and work to secure sufficient funds to take care of its ruling elite — and wait for the day that US forces leave the peninsula.

The security implications of a permanently nuclear-armed North Korea, however, are sufficiently serious to support the administration’s initiative to denuclearize the peninsula. In January 2019, the special US envoy of the United States to North Korea, Stephen Biegun, announced in a speech at Stanford University that the North Korea had indeed pledged to give a full inventory of its nuclear enrichment facilities at the upcoming summit. Apparently, North Korea changed its mind.

Indeed, why would North Korea bargain away its nuclear weapons capability if they believe that precisely that capability is what guarantees the survival of its regime? It only makes sense for North Korea to give up its nuclear capability if they are, in fact, not to protect the North’s sovereignty or guarantee its survival, but for some other purpose. What if instead, for example, North Korea regarded its nuclear program as the very leverage necessary to bargain concessions from the US and South Korea? What if the goal were to secure an extremely important concession — the removal of US military forces from the Korean peninsula, a goal long-sought, put on the table before North Korea even acquired nuclear weapons?

So far, however, with the exception of a “halt” in military exercises, the Trump administration has correctly resisted making any such “concessions.” This self-restraint comes despite concessions demanded regularly by angry North Korean officials at meetings with American officials, especially apparently at the most recent meeting with the United States Secretary of State.

As China expert Michael Pillsbury explains, the Chinese and North Koreans are flummoxed by President Trump. These two nations had regularly expected minor and reversible “concessions” by the North would be reciprocated by the US and allies with massive food and energy assistance, as well as sanctions relief, as has occurred in the past.

Now, it is true that for all the past efforts going back to the Agreed Framework of 1994 between the US and North Korea, the North has previously rejected a trade of ongoing sanctions relief and economic assistance in return for “giving up” its nuclear capability.

At the recent summit in Hanoi, however, that changed. North Korea, for the first time, did explicitly agree to dismantle its nuclear enrichment facility at Yongbyon, but in return for all sanctions that are “harmful” to the people of North Korea (mainly those imposed by the United Nations) being eliminated. This has been described as a “small deal” proposal, but nonetheless it was an actual trade heretofore never put on the table.

Why is that significant? If the question is trading an end to sanctions for denuclearization, then the definition of what exactly constitutes the North Korean nuclear capability is what is up for discussion, not that the nuclear weapons must be retained by the North to secure its survival.

It should now be clear to North Korea (and China) that the US troops in South Korea and Japan, and the US military presence in the Western Pacific, are not on the table for discussion.

The Trump administration took office after eight years of “strategic patience,” which led only to more North Korean missiles, nuclear bombs and weapons shipments to terror states. The proponents of these policies — having failed miserably — now lecture the Trump administration about what America’s North Korean policy should be. They seem, however, unwilling to see that the very nature of the discussion has now been changed — to a necessary focus on North Korea’s nuclear capability and not on the US military presence or ostensible US “hostile policy” in the region.

Dr. Peter Huessy is President of GeoStrategic Analysis, a defense consulting firm he founded in 1981, as well as Director of Strategic Deterrent Studies at the Mitchell Institute for Aerospace Studies. He was also for 20 years, the senior defense consultant at the National Defense University Foundation.

Published March 6, 2019 at gatestoneinstitute .org. Reprinted here March 7 for educational purposes only. May not be reproduced on other websites without permission from Gatestone Institute.

1. a) Define narrative.
b) What has been the long-standing U.S. narrative in the Middle East? (See paragraph 3)

3. In 2015, President Obama signed a nuclear deal with Iran in which he dropped sanctions against the country and sent the government $400 million in cash on an unmarked plane (money the U.S. held after Iran’s 1979 Islamic Revolution and the taking of U.S. hostages in Iran). What hostile actions has Iran taken following their agreement with President Obama? (list 3 – see para. 7)

5. Read each of the following points made by Mr. Huessy in this commentary. What is the general idea of these statements?

1. a) Definition of narrative:

4. a) Definition of conventional wisdom: