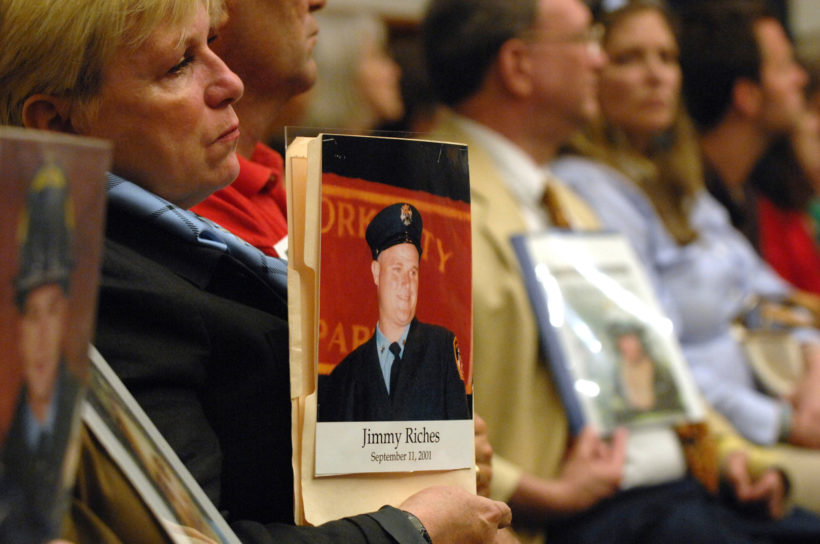 Jimmy Riches mother holds his photo at a 9/11 memorial service.

She dismissed thousands of people being murdered like it was an everyday occurrence when she said “some people did something.”

On 9/11/01 my son, firefighter Jimmy Riches was murdered along with close to 3,000 American citizens by Muslim terrorists.

I rushed to Engine 4 in Lower Manhattan when I heard what was happening. That’s where my son worked.

As I came over the Brooklyn Bridge, the towers had both already fallen. All the rigs at the firehouse were gone, so I knew they were all at the World Trade Center.

When I got there, I saw the death and destruction — people lying there dead and mangled.

We picked up the bodies and saw how gruesome it was. Those people died a horrible death.

We were there for 9 months picking up body parts, pieces.

People talk about closure, but that’s not closure. I’ll never get closure until my son walks through that door again.

It was the worst day for me, to lose my son and all those other people. They went to work that day to help people and they ended up murdered.

My son died doing his job, helping others in distress. The American public said NEVER FORGET 9/11!

There’s still 1,000 bodies that have never been recovered. It’s very sad that she could make such light of it.

She came here from Somalia. She was educated here. We took care of her. And now she’s saying 911 was nothing?

Until the time that you realize the importance of 9/11 as the worst day in American history, I call for your removal from Congress.

Published April 10, 2019 at NYPost .com. Reprinted here April 11, 2019 for educational purposes only. May not be reproduced on other websites without permission from the New York Post.

1. The purpose of an editorial/commentary is to explain, persuade, warn, criticize, entertain, praise or answer. What do you think is the purpose of Mr. Riches’ editorial? Explain your answer.

3. Watch the video under “Resources” below the questions. Check out the link to Remembering 9/11 in 2018. Mr. Riches’ concludes by writing about Omar:

“She came here from Somalia. She was educated here. We took care of her. And now she’s saying 911 was nothing?

Until the time that you realize the importance of 9/11 as the worst day in American history, I call for your removal from Congress.”

Do you agree with Mr. Riches? Explain your answer.

“CAIR was founded after 9/11 because they recognized that some people did something, and that all of us [Muslims] were starting to lose access to our civil liberties.”

In response to her comments, Rep. Dan Crenshaw (R-TX), a former Navy SEAL who lost an eye while fighting in Afghanistan, tweeted,

“First Member of Congress to ever describe terrorists who killed thousands of Americans on 9/11 as ‘some people who did something’. Unbelievable.”

Linking to Congressman Crenshaw’s tweet, Omar wrote, “This is dangerous incitement, given the death threats I face. I hope leaders of both parties will join me in condemning it. My love and commitment to our country and that of my colleagues should never be in question. We are ALL Americans!”

Omar is a a U.S. Congresswoman. She has made many disgraceful comments in the few months she has been in office. Now, instead of apologizing for her dismissive description of the 9/11 Islamic terrorists as “some people who did something,” she is demanding that Congress support her and condemn a decorated U.S. Navy Seal.

What do you think her fellow Democrats in Congress should do?  Condemn critics of Ilhan Omar’s disgraceful description, condemn her remarks, or ignore the matter entirely? Explain your answer.

Watch a video of Jim Riches and his three sons talking about their son and brother Jimmy Riches, who was a New York firefighter who was killed on 9/11: