Posted on February 4, 2016 in Thursday's Editorial 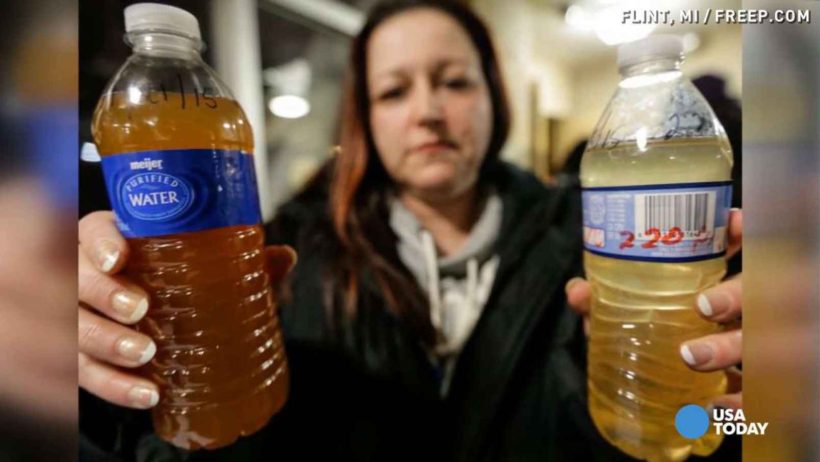 (by the Editors, National Review) – …Flint, Michigan has relatively high levels of lead in its drinking water, a cause for legitimate concern. This is a result not so much of the source of its drinking water, the Flint River, as of the city’s failure to treat the water, which, without the proper additives, leaches* lead and other contaminants from pipes. [*leach: to release (a chemical, a metal, etc.) when a liquid passes through]

Prior to and separate from the current water crisis, Flint was in a state of financial ruination. In one of the most liberal cities in the United States, Flint’s Democrat-dominated government did what Democrat-monopoly governments do in practically every city they control: It spent money as quickly as it could while at the same time [destroyed] the tax base with inept municipal services, onerous regulations, high taxes, and the like. As a result of this, a bankrupt Flint entered into a state of receivership, meaning that an emergency manager — or emergency financial manager, depending upon Michigan’s fluctuating fiscal-emergency law — was appointed by state authorities and given power to supersede local elected officials in some matters, especially financial ones.

The water contamination happened while Flint was under the authority of an emergency manager who, though a Democrat, had been appointed to the post by Michigan’s Republican governor, Rick Snyder. He was, in fact, the most recent in a long line of emergency managers, Flint having failed for years to emerge from its state of fiscal emergency.

Because the Democratic emergency manager was appointed by a Republican governor, [Democrats] have declared the situation in Flint to be a Republican scandal.

Before the appointment of the (Democratic) emergency manager, Flint’s elected mayor and city council (Democrats) had decided to sever the city’s relationship with its drinking-water supplier, which was at the time the Detroit water authority. Flint intended to join a regional water authority that would pipe water in from Lake Huron, a project that was scheduled to take three years to come online. In a fit of pique, Detroit (a city under unitary Democratic control) immediately moved to terminate Flint’s water supply, leaving the city high and literally dry.

At this point, somebody – no one will quite admit to being the responsible party – decided to rely temporarily on the Flint River. The Democrats in the city government deny responsibility for this; so does Darnell Earley, the Democrat who served as emergency manager. Earley says that the decisions to terminate the Detroit deal and rely temporarily on the Flint River “were both a part of a long-term plan that was approved by Flint’s mayor, and confirmed by a City Council vote of 7–1 in March of 2013 — a full seven months before I began my term as emergency manager.”

Meanwhile, Michigan’s Department of Environmental Quality (DEQ) … seems at the very least to have suppressed worrisome findings about Flint’s water supply, and may have done worse than that. The federal Environmental Protection Agency (EPA) – whose Democratic chief was appointed by our Democratic president – knew for months that there were concerns about Flint’s water, and did nothing.

Republican Governor Rick Snyder, of course, does bear some responsibility here and, to his credit, has acknowledged as much. No, no reasonable person expects the governor to show up in Flint with a white glove and personally eyeball what the local water-treatment plant is up to, but the people he appointed did an insufficient job. It is ironic, given the tenor of the denunciations, that Governor Snyder is as guilty of excessive bipartisanship as of any other offense: In his desire to keep Flint under the watch of an emergency manager with whom the locals were comfortable – a Democrat – he may have overlooked better candidates with more thoroughgoing approaches to reform. …

So while those who fault Governor Snyder are not entirely wrong, what is deeply dishonest is the story put forward by such people as the filmmaker Michael Moore, who enjoys pretending to be from gritty, blue-collar Flint (he actually hails from an affluent suburb nearby), that this is, somehow, the result of the Republican approach to government or conservative governing ideas. That is absurd. Flint is a mess made by Democrats, made worse by the Democrats in Detroit, and ignored by the Democrats in the White House. The worst that can be said of the Republican on the scene is that he failed to save the local Democrats from the worst effects of their own excesses. …

Posted at NationalReview .com on January 20, 2016.  Reprinted here February 4, 2016 for educational purposes only. May not be reproduced on other websites without permission from National Review.

2. The purpose of an editorial is to explain, persuade, warn, criticize, entertain, praise, exhort or answer. What do you think is the purpose of this editoral? Explain your answer.

3. Re-read the last paragraph of the article. The Oxford-English Dictionary defines assertion as: a confident and forceful statement of fact or belief.  Do you agree with the Editors’ assertion? Explain your answer.