Drawing the Wrong Lessons From Selma About America Today 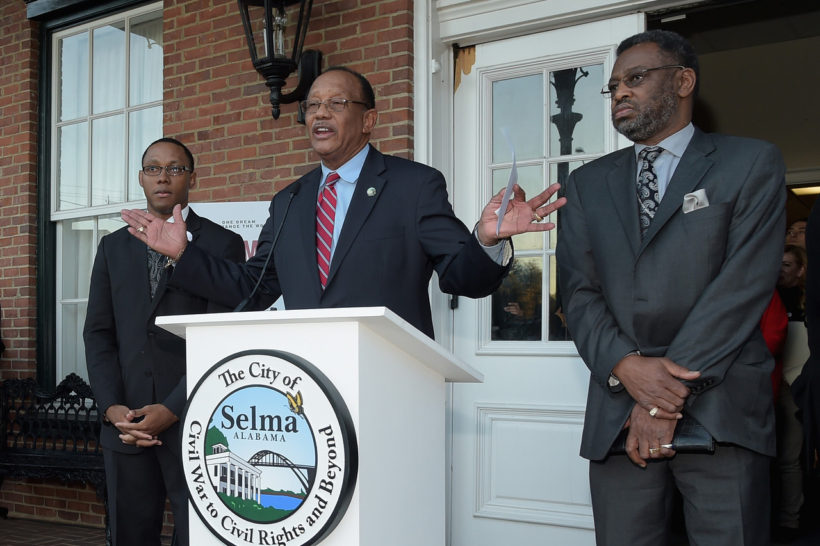 (by Jason L. Riley, The Wall Street Journal) – When National Public Radio on Sunday asked Selma’s mayor how – not whether, but how – “what happened in Selma 50 years ago fits into the current conversation about race relations in this country,” he rejected the query’s premise.

“I’m not so sure how it fits,” said George Evans, the Alabama city’s second black mayor. “We have a lot more crime going on in 2015 all over this country than we had in 1965. Segregation existed, but we didn’t have the crime. So now, even though we’ve gained so much through voting rights and Bloody Sunday, we’ve stepped backwards when it comes to crime and drugs and the jail system – things like that.”

The interviewer pressed him. “What is life like for the average citizen in Selma,” which is 80% black, she asked. “I mean, your city does have challenges. You’ve got chronic unemployment rates. What are the biggest problems from your vantage point?”

Still, Mr. Evans wouldn’t give her the answer she was fishing for. He wouldn’t play the race card. He answered:

“Well, from the standpoint of jobs, we have a lot of jobs. It’s just that there are a lot of people who do not have the skill level to man these jobs. And that’s the biggest problem we have. There are industries and businesses here that are searching for people to come to work. But many times they’re not able to get the jobs because they’re not going back to pick up that trade or that technical skill that’s needed in order to take that job.”

The mayor’s comments are noteworthy because so many others have used the anniversary of the historic march to score political points and draw tortured parallels between the challenges facing blacks a half-century ago and those facing blacks today. In remarks last weekend at the foot of the bridge in Selma where police billy-clubbed and tear-gassed peaceful protesters on March 7, 1965, President Obama decried “overcrowded prisons” and “unfair sentencing” without ever mentioning black crime rates. He repeatedly invoked Ferguson and called photo-identification laws “voter suppression.” Maybe someone should send Mr. Obama a link to the NPR interview with Mayor Evans.

Ferguson, Mo., in 2015 is not Selma, Ala., in 1965. Black people in America today are much more likely to experience racial preferences than racial slights. The violent crime that is driving the black incarceration rate spiked after the civil-rights victories of the 1960s, not before. And if voter-ID laws threaten the black franchise, no one seems to have told the black electorate. According to the Census Bureau, the black voter-turnout rate in 2012 exceeded the white turnout rate, even in states with the strictest voter-ID requirements.

The socioeconomic problems that blacks face today have nothing to do with civil-rights barriers and nearly everything to do with a black subculture that rejects certain attitudes and behaviors that are conducive to upward mobility. Yet Mr. Obama has a political interest – and the civil-rights industry has a vested interest – in pretending that the opposite is true.

“Liberalism in the twenty-first century is, for the most part, a moral manipulation that exaggerates inequity and unfairness in American life in order to justify overreaching public policies and programs,” writes the Hoover Institution’s Shelby Steele in “Shame,” his timely new book on political polarization and race relations in the U.S. This liberalism, he adds, is “not much interested in addressing discrimination case by case; rather, it assumes that all minorities and women are systematically discriminated against so that only government-enforced preferential policies for these groups – across the entire society – can bring us close to equity.”

Liberalism, moreover, tends to ignore or play down the black advancement that took place prior to the major civil-rights triumphs of the 1960s and instead credits government interventions that at best continued trends already in place. Black poverty fell 40 percentage points between 1940 and 1960 – a drop that no Great Society antipoverty program has ever come close to matching. Blacks were also increasing their years of schooling and entering the white-collar workforce at a faster rate prior to the affirmative-action schemes of the 1970s than they were after those programs were put in place to help them.

The civil-rights battles of the 1960s have been fought and won, thanks in part to the thousands of brave souls who marched 50 years ago from the Brown Chapel African Methodist Episcopal Church in Selma to the Montgomery Statehouse. The racial disparity that persists today is not evidence that too many blacks face the same challenges they did in 1965, that “the march is not yet finished,” as Mr. Obama asserted. Rather, it is evidence that too few blacks – as Selma’s mayor told NPR – have taken advantage of the opportunities now available to them.

Mr. Riley, a Manhattan Institute senior fellow and Journal contributor, is the author of “Please Stop Helping Us: How Liberals Make It Harder for Blacks to Succeed” (Encounter Books, 2014).

Published March 10, 2015 at The Wall Street Journal. Reprinted here March 12, 2015 for educational purposes only. Visit the website at wsj .com.

1. What is the main idea of Mr. Riley’s commentary?

2. Which of the following facts are surprising to you? Why do you think this is so?

3. Re-read the comments made by Selma’s mayor, George Evans. Listen to his interview below. What do you think of Mayor Evans’ contrary view to that of the NPR interviewer on Selma 50 years ago and race relations today?