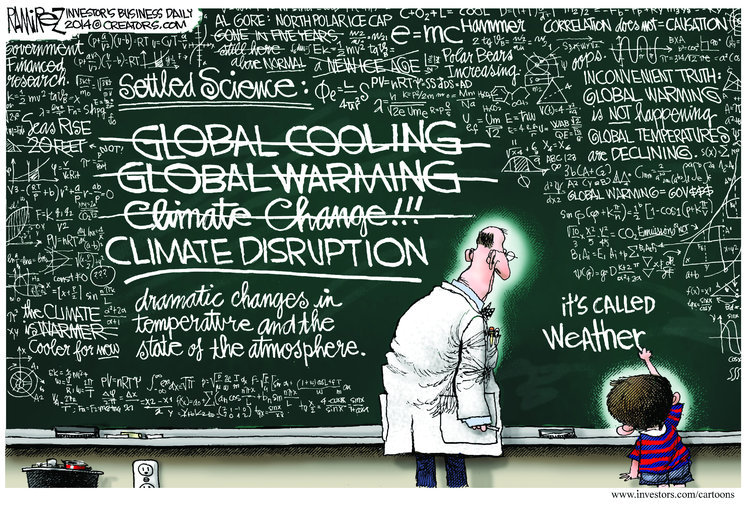 (by the Editors, Investor’s Business Daily) – Deadly flooding in Texas and Oklahoma is being blamed on global warming. Last year, when Texas was in a drought, global warming was also held responsible. Has anyone thought that maybe it’s just the weather?

‘Torrential downpours and events like this are consistent with the general theory of global warming,” Dave Schwartz of the Weather Channel has told the International Business Times.

Writing in the Huffington Post, James Gerken asks if the disaster is “climate change in action,” then answers his own question, declaring that, “at minimum, the recent downpours in Texas probably offer a glimpse of what certain parts of the U.S. can look forward to in the coming decades.”

“Billion$$ in damage in Texas & Oklahoma. Still no weather-caster may utter the phrase Climate Change.”

Not to be left out is Scientific American, which headlined a Web story thusly:

“Climate Change May Have Souped Up Record-Breaking Texas Deluge.”

So, we have to wonder, what about last year, when Texas had to worry about a shortage of rain and parched earth? Surely if heavy rains are deviations from the norm caused by global warming, then the dry conditions found in Texas must be natural and not the product of man-made climate change.

Well, not in the eyes of those who see man-made global warming as cause for every weather event that seems to be outside the ordinary. Last year during that harsh drought, they were also happy to lecture the public about global warming’s role.

On that same day, the Dallas Morning News cited a federal report that said “worse” global warming effects were “ahead for Texas.”

A year earlier, USA Today reported that “Climate change’s heat intensifies drought in the USA.” And the 2011 Texas drought, reported NBC News, was “20 times more likely due to warming.” Climate Central cited a study that year that found that global warming was “amplifying Texas drought, wildfires.”

So, yes, global warming causes drought – and it causes heavy rain. In fact, it doesn’t matter what the weather does; there is a faction out there that’s always prepared to say that human-caused emissions of carbon dioxide are responsible.

The rational explanation for what appear to be weather extremes is actually found within the International Business Times story we cited above.

Far below the headline, Russell Persyn, a watershed engineering manager with the San Antonio River Authority, noted: “Texas in general goes back and forth from being very drought-stricken to where we get these heavy rainfalls that occur within a few hours.”

Neither drought nor hard rain is new to Texas and Oklahoma, whose histories are filled with excessive wet periods and extreme dry spells. This cycle was spinning before we began emitting CO2 and it will still be spinning after our CO2 emissions have ceased. These are facts, but some want the rest of us to forget them.

2.  What is the opposing view to this opinion?

3.  The IBD Editors conclude “Neither drought nor hard rain is new to Texas and Oklahoma, whose histories are filled with excessive wet periods and extreme dry spells. This cycle was spinning before we began emitting CO2 and it will still be spinning after our CO2 emissions have ceased. These are facts, but some want the rest of us to forget them.”

What is your response to this assertion?  Agreement or disagreement?  Explain your answer.  If you disagree, explain why you believe the editors are wrong.

NOTE TO STUDENTS:
Many issues can be controversial. While you might not feel strongly about a certain topic, others around you might take a strong position on one side or the other. Learn to logically defend your position, and politely respect your neighbor’s point of view. And if your neighbor gets argumentative with you, remind each other that both sides need to be tolerant of the other’s point of view.