Posted on February 20, 2020 in Thursday's Editorial 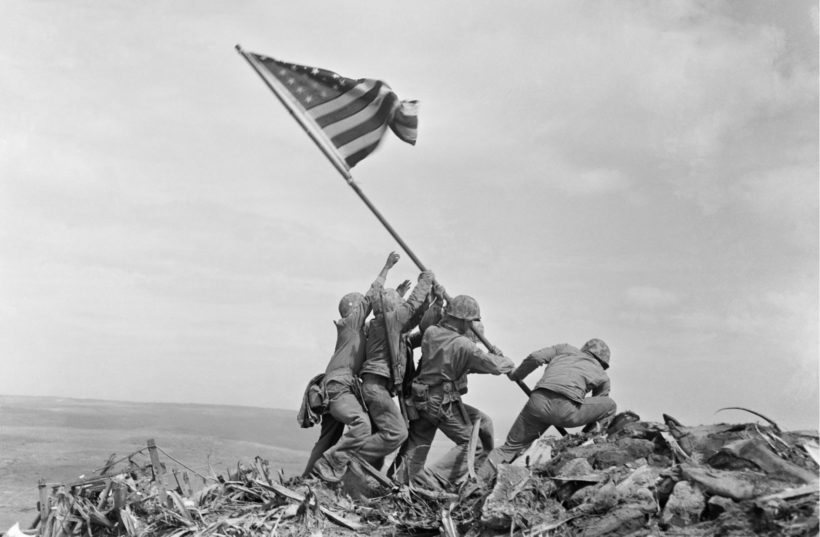 Marines raising the US flag atop Mount Suribachi--Iwo Jima's highest point. -- The Battle of Iwo Jima lasted almost a month (from Feb. 19 to March 16, 1945), leaving thousands dead and even more wounded. Yet one photo gave, and continues to give, Americans hope. Look back at the battle that led to the iconic photo.

(by Greg Wilsbacher, Business Insider) – When most Americans think of the World War II battle for Iwo Jima — if they think of it at all, 75 years later — they think of one image: Marines raising the US flag atop Mount Suribachi, the island’s highest point.

That moment, captured in black and white by Associated Press photographer Joe Rosenthal and as a color film by Marine Sergeant William Genaust, is powerful, embodying the spirit of the Marine Corps.

But these pictures are far from the only images of the bloodiest fight in the Marines’ history. A larger library of film, and the men captured on them, is similarly emotionally affecting. It can even bring Americans alive today closer to a war that ended in the middle of the last century.

Take for instance, just one scene: Two Marines kneel with a dog before a grave marker. It is in the final frames of a film documenting the dedication of one of the three cemeteries on the island. Those two Marines are among hundreds present to remember the more than 6,000 Americans killed on the island in over a month of fighting.

The sequence is intentionally framed by the cinematographer, who was clearly looking for the right image to end the roll of film in his camera. [See interview with Mr. Wilsbacher under “Resources” below. The sequence starts at 4:28.]

I [Greg Wilsbacher] came across this film clip in my work as a curator of a collection of motion picture films shot by Marine Corps photographers from World War II through the 1970s.

In a partnership between the History Division of the Marine Corps and the University of South Carolina, where I work, we are digitizing these films, seeking to provide direct public access to the video and expand historical understanding of the Marine Corps’ role in society.

Over the past two years of scanning, I have come to realize that our work also enables a more powerful relationship with the past by fostering individual connections with videos, something that the digitizing of the large quantity of footage makes possible.

The campaign within the battle

Iwo Jima, an island in the western Pacific less than 1,000 miles south of Tokyo, was considered a key potential stepping stone toward an invasion of Japan itself.

During the battle to take the island from the Japanese, more than 70,000 Marines and attached Army and Navy personnel set foot on Iwo Jima. That included combat soldiers, but also medical corpsmen, chaplains, service and supply soldiers and others. More than 6,800 Americans were killed on the island and on ships and landing craft aiding in the attack; more than 19,200 were wounded.

More than 50 Marine combat cameramen operated across the 8 square miles of Iwo Jima during the battle, which stretched from February 19 to March 26, 1945. Many shot still images, but at least 26 shot motion pictures. Three of these Marine cinematographers were killed in action.

Even before the battle began, Marine Corps leaders knew they wanted a comprehensive visual account of the battle. Beyond a historical record, combat photography from Iwo Jima would assist in planning and training for the invasion of the Japanese main islands.

Some Marine cameramen were assigned to the front lines of individual units, and others to specific activities, like engineering and medical operations.

Most of the cameramen on Iwo Jima used 100-foot film reels that could capture about two and a half minutes of film. Sgt. Genaust, who shot the color sequence atop Mount Suribachi, shot at least 25 reels — just over an hour of film — before he was killed, roughly halfway through the campaign.

Sgt. Louis L. Louft fought with the 13th Marines, an artillery regiment; his more than 100 film reels likely resulted in more than four hours of content. Landing on the beach with engineers of the 4th Division on February 25, 1945, Pfc. Angelo S. Abramo compiled over three hours of material in the month of fighting he witnessed.

Even taking a conservative average of an hour of film from each of the 26 combat cameramen, that suggests there was at least 24 hours of unique film from the battle. Many surviving elements of this record are now part of the film library of the Marine Corps History Division, which we’re working with. The remainder are cataloged by the National Archives and Records Administration.

While military historians visiting the History Division in the past have used this large library, the bulk of its films have not been readily available to the public, something that mass digitization is finally making possible.

For many decades, the visual records made by Marines have been seen by the public only piecemeal, often with selected portions used as mere stock footage in films, documentaries and news programs, chosen because a shot has action, not because of the historical context of the imagery.

Even when they are used responsibly by documentary filmmakers, the editing and selection of scenes imposes the filmmaker’s interpretation on the images. As a historian and archivist, though, I believe it is important for people to directly engage with historical sources of all types, including the films from Iwo Jima.

After the battle, the Americans buried their dead in temporary cemeteries, awaiting transportation back to the US. The film segment just before the graveside scene shows a service honoring the Americans of all backgrounds who had bled and died together.

At that service, Rabbi Roland B. Gittelsohn, the Marines’ first-ever Jewish chaplain, gave a eulogy that has become one of the Marine Corps’ most treasured texts.

Gittelsohn called their collective sacrifice “the highest and purest democracy.”

Connecting to the present

After the dedication ceremonies, Marines walked the 5th Division cemetery, looking for familiar names. The photographers were there, and one recorded the footage of the two Marines — names not known — and the dog, at a grave with only the number 322 as a visible marking. [See interview with Mr. Wilsbacher under “Resources” below. The sequence starts at 4:28.]

The image stood out. The two Marines looking directly at the camera seemed to reach across the decades to compel a response. Researchers at the History Division identified the Marine beneath marker 322 as Pfc. Ernest Langbeen from Chicago. It felt appropriate and important to add his name to the online description for that film, so I did.

I then located members of the Langbeen family, and told them that this part of their family’s history existed in the History Division’s collections and was now preserved and available online after more than seven decades.

Speaking with the family, I learned more about the Marine in grave 322. One of the two Marines in the picture may well be his best friend from before the war, a friend who joined the Corps with him. They asked to serve together and were assigned to the same unit, the 13th Regiment.

Now, family members who never knew this Marine have a new connection to their history and the country’s history. More connections will come for others. The digital archive we’re building will make it easier for researchers and the public at large to explore the military and personal history in each frame of every film. …

The films are a reminder that, 75 years after World War II, all Americans remain tied to Iwo Jima, as well as battlegrounds across the world like Monte Cassino, Peleliu, Bataan and Colleville-sur-mer. Americans may find their relatives in this footage, or they may not. But what they will find is evidence of the sacrifices made by those fighting on their behalf, sacrifices that connect each and every American to the battle of Iwo Jima.

Greg Wilsbacher is a faculty librarian at the University of South Carolina where he curates the Fox Movietone News Collection and the United States Marine Corps Film Repository. He writes and lectures on newsreel history, digital preservation theory, optical sound technologies and military cinematography and serves as a Board member of the non-profit, Envisioning History. Since 2011, he has led an interdisciplinary team as part of the AEO-light Project, which has developed an open-source software solution for preserving optical film sound. In 2019, began a collaboration with the university’s Computer Vision Lab to develop machine learning and artificial intelligence models that will expand searchability and access to the Marine Corps films.

Published Feb. 19, 2020 at BusinessInsider .org. Reprinted here on Feb. 20, 2020 for educational purposes only. May not be reproduced on other websites without permission from Business Insider.

2.  What is the main idea of Greg Wilsbacher’s commentary?

3. In this commentary, Greg Wilsbacher writes, “Even when they are used responsibly by documentary filmmakers, the editing and selection of scenes imposes the filmmaker’s interpretation on the images. As a historian and archivist, though, I believe it is important for people to directly engage with historical sources of all types, including the films from Iwo Jima.” Do you agree with Mr. Wilsbacher’s assertion?  Explain your answer.

Watch a Feb. 18, 2020 CBS News interview with Greg Wilsbacher discussing the project to digitize the films from Battle of Iwo Jima and the Marine combat photographers who documented the battle: