What is it Now?

1.  A cartoonist often uses exaggeration to make a point. What point is the cartoonist making through exaggeration?
a)  Mitt Romney asked too many questions during the first presidential debate
b)  the media is biased in President Obama’s favor
c)  President Obama should have the larger podium because he is the president of the United States
d)  the often repeated accusation that the media has a liberal bias is a myth

2.  Do you agree with the cartoonist’s assertion?  Explain your answer. 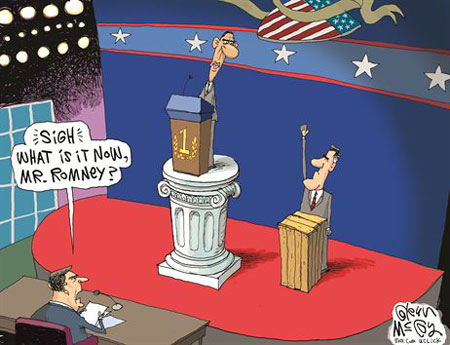 1.  b)  the media is biased in President Obama’s favor