1. Tone is the attitude a cartoonist takes towards a subject. Which pair of words best describes the tone of this cartoon?
a) respectful/admiring
b) resigned/defeated
c) light-hearted/humorous
d) disgusted/annoyed

2. What two news items did cartoonist Al Goodwyn combine to create this cartoon?

3. What point is Goodwyn making in this cartoon? 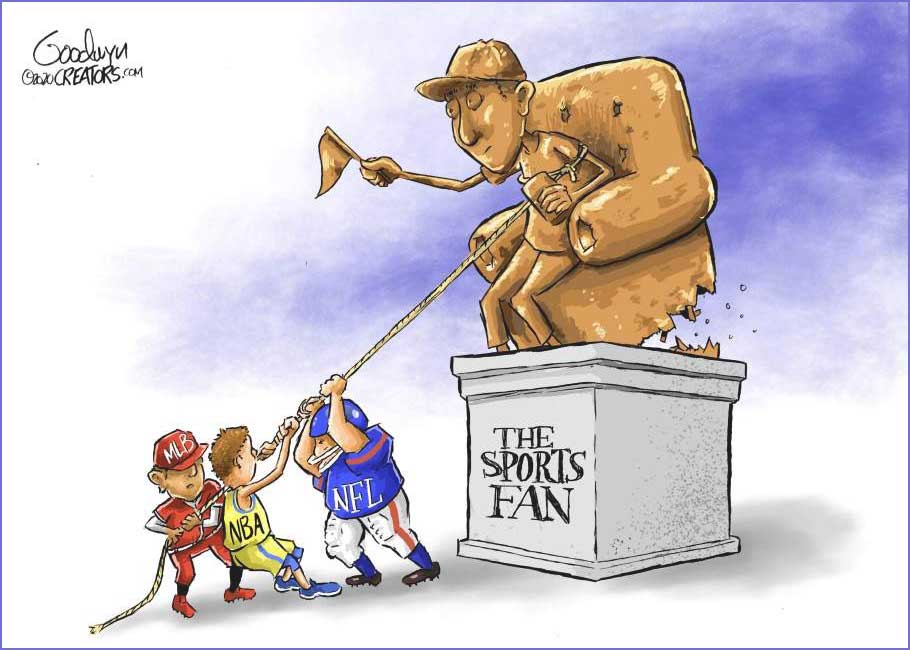 2.The two ongoing news items combined in this cartoon:

3. Many Americans see the players kneeling as a sign of disrespect for the sacrifices our military has made to defend our country and our flag, especially when done by multimillionaire athletes, who are super wealthy due to the opportunities afforded them by living in this great country.

Major league sports are watched by fans for enjoyment, entertainment and a time to escape politics and everyday life. Sports bring people together, even in their team rivalries. Fans don’t want politics on the field.

Players alienate a large number of their fans by making political statements on the field during games. The fans are the reason they are multimillionaires.

Editors’ Note: People don’t have a right to tear down and destroy something they find offensive. Rather, they should work to change the laws, or petition to move the statues to a history museum, etc. What’s to say the next mob won’t come along and tear down statues of FDR (Japanese internment), JFK, MLK and Bill Clinton (#metoo)?