1. Who is the man in the cartoon?
a) Dmitry Medvedev
b) Bashar Assad
c) Vladimir Lenin
d) Vladimir Putin

2. What phrase/idiom is the cartoonist illustrating?
a) to play someone like a fiddle
b) playing the world’s smallest violin
c) he is fit as a fiddle
d) to play second fiddle

3. What is the cartoonist’s intended meaning? 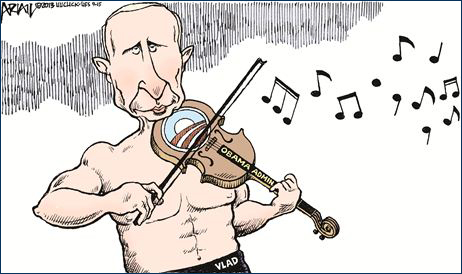 1. The answer is d) Vladimir Putin, President of Russia (he has posed bare-chested several times, while hunting or horseback riding)

2. The answer is a) to play someone like a fiddle – it means to manipulate (a person) skillfully. (from wiktionary.org)

The answer is NOT:
b) playing the world’s smallest violin – This is a gesture made by rubbing the thumb and forefinger together, to imitate bowing a violin. It is used to express sarcasm and lack of sympathy, in response to someone exaggerating a sad story or unfair treatment.
c) he is fit as a fiddle – this means to be very healthy
d) to play second fiddle – if you play second fiddle, you take a subordinate role behind someone more important; to be in a subordinate position to someone

3. The cartoonist means that Russian President Putin has manipulated President Obama – played him like a fiddle – on his dealings with Syria: