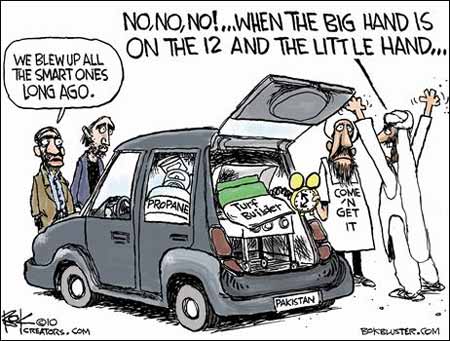 Faisal Shahzad, an Islamic extremist from Pakistan who recently became an American citizen, trained with the Taliban in Pakistan to set off an explosive filled car in the middle of Times Square in NYC, with the intent of killing and injuring many people. The plot was not successful and there was some speculation that the timer was not set properly.  The media branded Shahzad an inept terrorist.

The cartoonist is making light of the situation by portraying terrorist bombers as inept fools who are regarded as idiots by their Taliban trainers.