This cartoon refers to an interview Catherine Anaya, a local anchor from KPHO in Phoenix, had with President Obama. She talked after about an off-the-record chat with the president’s press secretary Jay Carney. Anaya told viewers that Carney, in describing his daily preparation,

“also mentioned that a lot of times, unless it’s something breaking, the questions that the reporters actually ask — the correspondents — they are provided to him in advance. So then he knows what he’s going to be answering and sometimes those correspondents and reporters also have those answers printed in front of them, because of course it helps when they’re producing their reports for later on. So that was very interesting.”

What do you think:  Did the reporter make up her first claim?  Explain your answer. 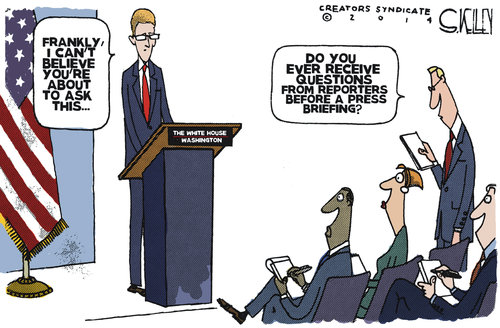