1. Who is Joe the Plumber and why is he famous?
2. Do you agree with the cartoonist’s suggestion that many people would rather vote for average guy, Joe the Plumber, than either Sen. Obama or Sen. McCain? Explain your answer. 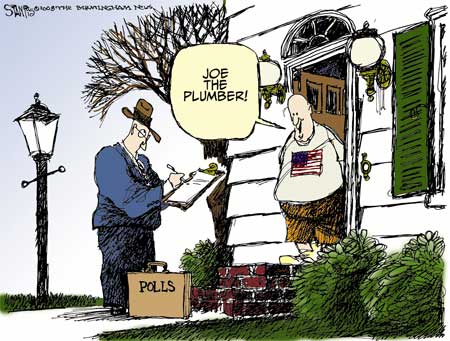 1. Joe the Plumber (Joe Wurzelbacher) is a voter from Ohio who asked Sen. Obama about his tax plan during a campaign stop, and why he would be taxed more under Sen. Obama’s plan if he buys the small business at which he currently works. Sen. Obama responded by saying:

“It’s not that I want to punish your success. I just want to make sure that everybody who is behind you, that they’ve got a chance at success too. I think when you spread the wealth around it’s good for everybody.”