2. On what news story is this cartoon based?

3. What does the cartoonist think about renaming the Freedom Tower?  Do you agree?

4. Do you think the name change was due to political correctness? Explain your answer. 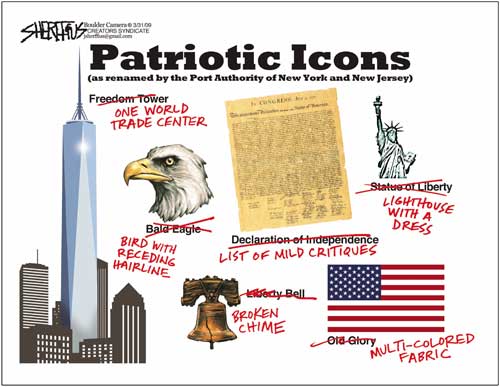 1. icon – a very famous person or thing considered as representing a set of beliefs or a way of life (from dictionary.cambridge.org)
politically correct – conforming to a belief that language and practices which could offend political sensibilities should be eliminated (merriam-webster.com)

3. The cartoonist thinks that it is ridiculous/absurd/wrong to rename the Freedom Tower.  This new building is designed to represent the U.S. in the same way that the Statue of Liberty, the Liberty Bell, the Bald Eagle, the Declaration of Independence and Old Glory (the American flag) represent our country.  His point is that renaming it would be the same as renaming any of these other icons that represent the U.S.

Read the story at nypost.com.

Read about Freedom Tower / One World Trade Center at wikipedia.org.