1.  Define watchdog as used in this cartoon.

2.  What point is Ramirez making in this cartoon? (Hint: In reference to Iran.) 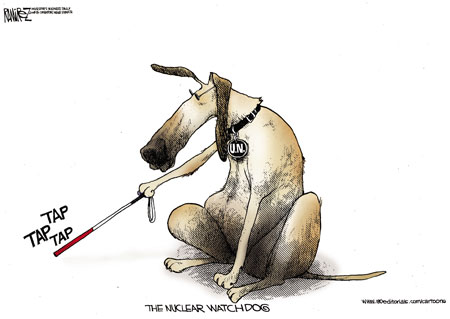 1.  Watchdog – one who serves as a guardian or protector against illegal practices.  (from American Heritage Dictionary)

Specifically, Iran’s 20 year secret nuclear program was discovered in 2002.  Iran says its program is for fuel purposes only, but it has been working on uranium enrichment which is used to make nuclear bombs.  Under the  NPT (Non Proliferation Treaty) countries are not allowed to make nuclear weapons. In September 2006, the U.S. attempted to get the UN’s IAEA (International Atomic Energy Agency) to refer Iran to the UN Security Council with the hope that if Iran did not stop their work, the Security Council would impose sanctions on Iran to force them to comply with the NPT.  The UN did eventually impose some sanctions on Iran in December 2006 and extended the sanctions further in March 2008.  Finally on September 22, 2008, Mohammed al-Baradei, the head of the International Atomic Energy Agency, warned that he cannot guarantee that Iran is not running a secret nuclear program.