1. An editorial cartoonist often uses humor to illustrate a news item. What recent news item is Dana Summers illustrating in this cartoon?

2. The Golden Globe Award is bestowed by the members of the Hollywood Foreign Press Association, recognizing excellence in film and television, both domestic and foreign.
a) Do you support movie stars using this platform to bash the Republican president-elect?  Would your answer differ depending on the political party/candidates you support? Explain your answers.
b) Many in Hollywood and the media said Meryl Streep was brave for criticizing Trump in her speech. Do you agree? Explain your answer.

3. Why do you think the entertainment industry (Hollywood and musicians) uniformly support Democratic candidates and liberal policies? 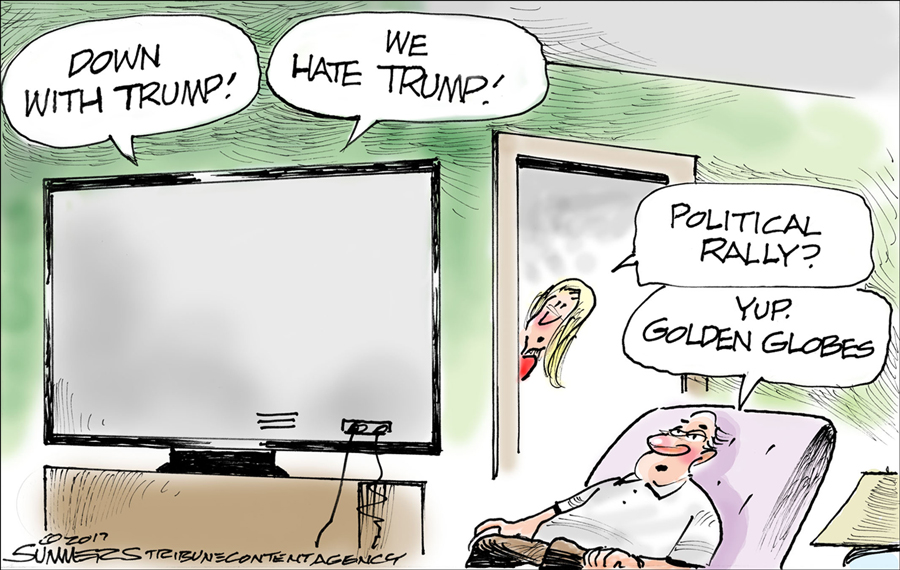 1. Meryl Streep, a vocal Hillary Clinton supporter, attacked president-elect Donald Trump during her acceptance speech at the Golden Globes. Streep went on a long, impassioned rant against Trump after getting the Cecil B. DeMille Award for lifetime achievement. She claimed TV and movie stars belong to “the most vilified segments in American society” — and that many of the biggest names in show business come from other countries.

“Hollywood is crawling with outsiders and foreigners, and if we kick them all out you’ll have nothing to watch but football and mixed-martial-arts, which are not the arts,” Streep said.  She was widely applauded by almost every star in attendance.