1. Define deficit as used in the cartoon.

2. Irony is defined as when the opposite of what you expect to happen occurs. Describe the irony of this cartoon.

3. Symbol is defined as: something that stands for or suggests something else; a visible sign of something invisible (the lion is a symbol of courage)
What does the man in the striped pants symbolize? 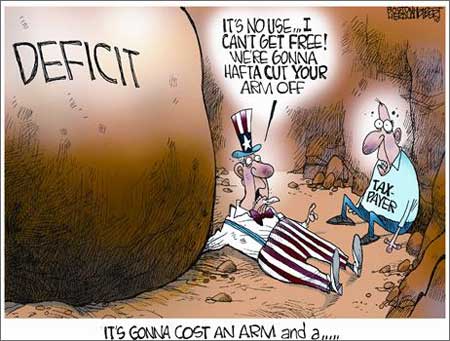 Cartoon by Jerry Holbert. Posted here for educational purposes only.

2.  The irony of this cartoon is that you’d expect the person who is trapped (the U.S. government) to cut off his arm (to cut government spending) to free himself (to get out from under the debt).  Instead, he tells the U.S. taxpayer to cut off his own arm (pay more taxes), which will do nothing to solve the problem (reduce the deficit).