Which of the following best describes cartoonist’s point?

a) He thinks the government should spare no expense to rescue the kidnapped captain of the U.S. cargo ship – if the banks are worth it, so is an American citizen
b) He compares paying a huge ransom to pirates as the equivalent of the federal government bailing out the banks and believes both situations are being handled foolishly
c) He wishes the government would save the ship captain kidnapped off the coast of Somalia the same way they bailed out the faltering U.S. banks
d) He is outraged at the way the government is dealing with the pirates, and the way they are handled the economic crisis with the banks, and feels they should not be involved in either problem 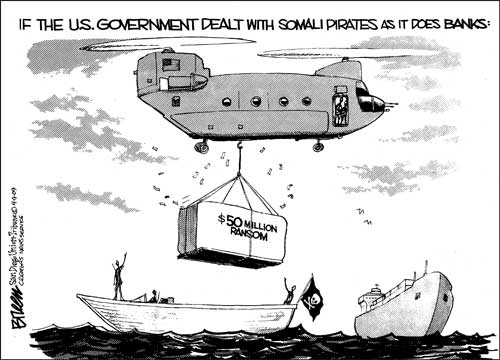