1. Tone is the attitude a cartoonist takes towards a subject. Which pair of words best describes the tone of this cartoon?
a) sarcastic/humorous
b) angry/critical
c) grateful/appreciative
d) fearful/defeated

2. Which comic device does the cartoonist use to make his point? Explain your answer.
a) parody
b) pun
c) sarcasm
d) exaggeration 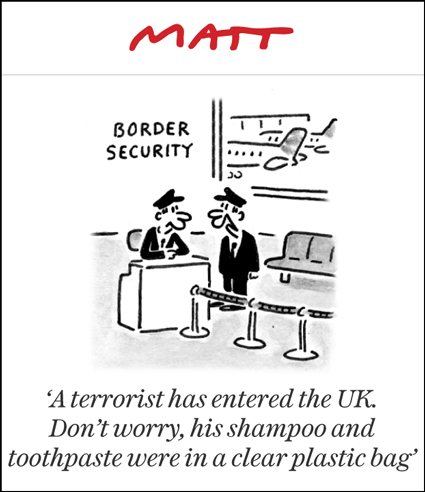 2. c) sarcasm – a form of verbal (or visual) irony in which it is obvious from context and tone that the speaker means the opposite of what he or she says

The cartoonist did not use:
a) parody – known by also as a spin-off or spoof, a parody is an imitation of another’s work, usually in a humorous way to poke fun at the original work. Usually, for a better effect, a parody makes fun of a famous or well-known piece of work, so the audience has a better chance of recognizing the original.

b) pun – a play on words that uses the similarity in sound between two words with distinctly different meanings.