2. An editorial cartoonist often uses humor to point out the absurd or ridiculous. Which comic device do you think cartoonist Steve Kelley uses to make his point? Explain your answer.
a) hyperbole
b) personification
c) satire
d) caricature
e) pun 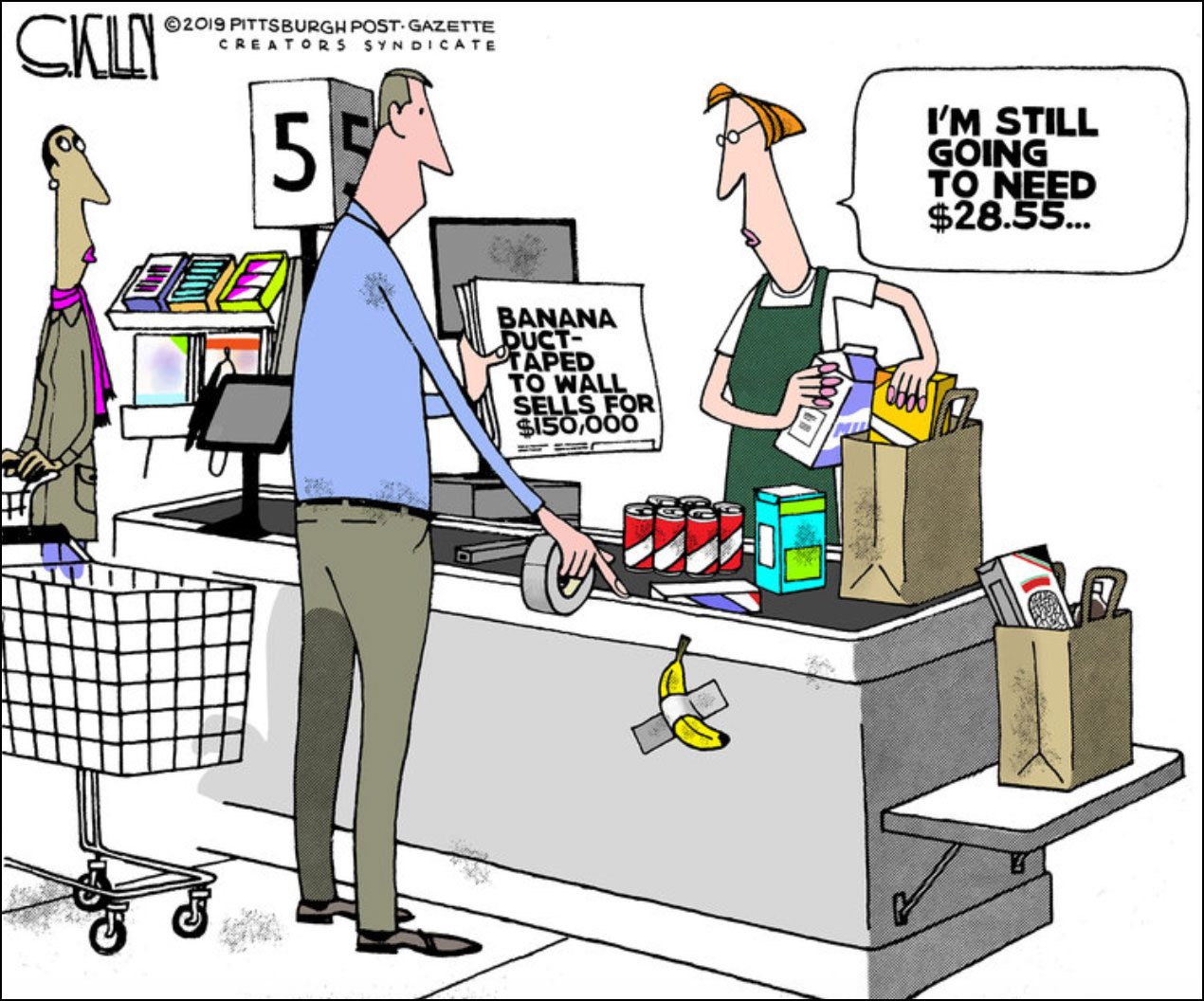 1. Italian artist Maurizio Cattelan created the conceptual art piece titled Comedian. It is a banana duct-taped to a wall.

The longer explanation: For this piece of conceptual art, “Cattelan was thinking of a sculpture that was shaped like a banana,” a statement from the gallery where it was exhibited read. “Every time he traveled, he brought a banana with him and hung it in his hotel room to find inspiration. He made several models: first in resin, then in bronze, and in painted bronze (before) finally coming back to the initial idea of a real banana.”

The piece was wildly popular with huge crowds lined up to view it in Miami and wound up with three buyers. It is reported that two editions went for $120,000 before the price was raised to $150,000.

Vogue noted collectors “weren’t actually buying the work itself — it’s a banana. It’s going to rot. They instead bought the certificate of art. They bought the idea rather than the object. And when the banana goes bad, the owner can replace it, according to the artist’s instructions. It will still be considered a Cattelan.”

2. c) satire – the use of irony, sarcasm, ridicule, or the like, in exposing, denouncing, or deriding vice, folly, etc.
(from literarydevices.com: satire is the use of humor, irony, exaggeration, or ridicule to expose and criticize people’s stupidity or vices. It’s an extremely broad category. The “or” in the definition is key – most satires are humorous, ironic, and exaggerated, but they only have to be one of these things to count as satire.)

a) hyperbole – An extreme magnification or exaggeration of actuality. It blows something completely out of proportion for a distorted effect. The purpose of hyperbole is to create a larger-than-life effect and overly stress a specific point. (Used as a figure of speech in which exaggeration is used for emphasis or effect, as in “I could sleep for a year” or “This book weighs a ton”)

b) personification – a figure of speech in which human characteristics are attributed to an abstract quality, animal, or inanimate object

d) caricature – A description or characterization that exaggerates or distorts a character’s prominent features, usually for purposes of mockery. For example, a cartoon of a gaunt Abraham Lincoln with a giant top hat, a very scraggly beard, and sunken eyes could be considered a caricature.

3. c) the emperor’s new clothes, which refers to something widely accepted as true or professed as being praiseworthy, due to an unwillingness of the general population to criticize it or be seen as going against popular opinion

The answer is not:
a) top banana: the most important person in an organization or activity; the most powerful or important person around; the boss
b) banana republic: describes a small dependent country usually of the tropics, especially: one run despotically
d) second banana: A person who serves in a supporting, secondary, or subsidiary capacity; an assistant. (A performer in show business, esp. vaudeville, who plays a subordinate role, as straight man, to the top banana, or star comedian)