A cartoonist often uses humor to illustrate a news item. What comic device does the cartoonist use to highlight this news story? 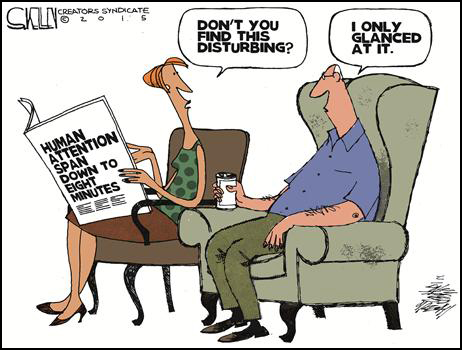 c) exaggeration: The cartoonist is exaggerating how short a person’s attention span is.

a) symbol: An object, character, figure, place, or color used to represent an abstract idea or concept.

b) understatement, which is a figure of speech in which statements are purposely understated. It may be used to indicate the speaker’s nonchalance (or obliviousness) regarding an often important or otherwise remarkable situation. It often results in irony where, for instance, the speaker’s response to an event does not match how the viewer expects the speaker to react.

d) parody, which is a humorous or satirical imitation of a serious piece of literature or writing; a work in which the style of an author or work is closely imitated for comic effect or in ridicule

e) pun, which is a “play on words” – a type of humor using a word or phrase that has two meanings