1. President Obama has announced his intention to bypass Congress to advance his administration’s goals. He told his Cabinet “We are not just going to be waiting for legislation…” What did President Obama also say regarding his plan to act alone?
a) “Congress is irrelevant”
b) “I’ve got a pen and I’ve got a phone”
c) “I’m an army of one”

3. Which comic device does the cartoonist use to make his point? Explain your answer.
a) irony
b) pun
c) parody
d) exaggeration 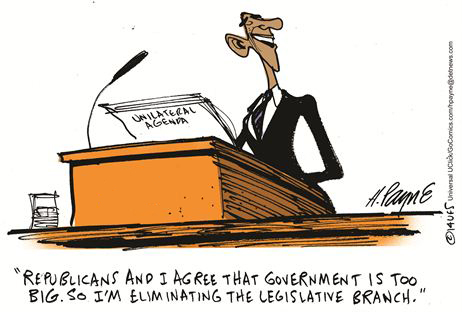 3.  d) exaggeration – the cartoonist is exaggerating how far the President will go in acting without Congress