(by Anton Troianovski and Eliot Brown, The Wall Street Journal, wsj.com) – One year and one day from now, after years of … delay and controversy, the World Trade Center memorial will be dedicated.

While organizers are finally on track to open the memorial by the 10th anniversary of the terrorist attack, they haven’t figured out the logistics for opening it up to the public afterward.

Challenges are manifold. The memorial, after all, is in one of the country’s biggest construction sites and what was in the past a prime terrorism target. During construction, the skyscrapers and other buildings rising on three sides will pose a safety risk for the millions of visitors who are expected to visit.

A wide number of other issues also aren’t resolved, from how visitors to the memorial will be screened to where the scores of tour buses will be parked. “It’s a matter of figuring out, within all this heavy construction, how do you get people onto the site safely and off the site safely?” said Joe Daniels, president of the National September 11 Memorial & Museum, in an interview. “We don’t have all the answers yet.”

Indeed, planners haven’t even figured out exactly where visitors will enter the memorial on Sept. 12, 2011. At a news conference earlier this week, Mayor Michael Bloomberg said the site would be open from the western end of Ground Zero. “Every once in a while they’re going to have to move a beam or something and they’ll close off a part of it,” Mr. Bloomberg said.

But officials at the city and the Port Authority of New York and New Jersey, which owns the site, declined to elaborate on exactly where on the western end of the memorial the entrance would be. There’s not too much room because the busy West Side Highway runs along the western edge, although there are bridges to Battery Park City that could be used. It’s also not clear where lines will form in the likely event that the memorial is as popular as planners expect.  All the other sides of the memorial are closed off by construction. …

The obstacles are so formidable that some officials at the Port Authority weren’t sure it could be done. Under intense political pressure the agency in 2008 committed to opening the plaza surrounding two pools and waterfalls within the footprints of the World Trade Center towers on the 10th anniversary of the 9/11 attacks, and leaving it open to the public after that.

To hit the deadline, the [Port] Authority in recent years has accelerated construction. The memorial foundation that will operate the memorial once it opens, meanwhile, hired Gene McGovern, a hard-charging, veteran New York building executive who helped oversee the renovation of the Statue of Liberty in the 1980s, as a construction consultant.

Yet the plans for opening the memorial to the public have continued to stir tensions. For instance, City Hall has had disagreements with the New York Police Department, which wants more stringent control over how visitors reach the site, according to government officials familiar with the discussions. Questions of access have become a primary issue, these officials said. Some have suggested that crowds pass through metal detectors and be subject to searches.

Spokesmen for the Police Department and Mr. Bloomberg played down tension but acknowledged discussions were under way. “All parties are concerned about how the memorial will function and handle visitor safety with ongoing construction at the site,” said Paul Browne, a Police Department spokesman.

Mr. Daniels declined to comment on specific security measures being contemplated. “There’s a discussion going on on how to achieve the goal of making sure our visitors are safe but still giving them the freedom of movement to pay their respects at the memorial,” he said.

It also isn’t clear where tour buses will park. Some have suggested parking buses in New Jersey and ferrying visitors to the memorial. But New York officials have been concerned that such a plan would divert tourists and their spending.

At his news conference earlier this week, Mr. Bloomberg acknowledged continued construction at the site would pose an issue, but said visitors will “be able to come walk the plaza, sit, contemplate, the fountains will be working, look at the names.”

But some are still concerned about how the public will be able to visit while construction continues around them. “That’s a huge problem,” said memorial foundation board member Andrew Senchak, vice chairman of financial-services firm Keefe, Bruyette & Woods, which lost 67 employees in the 9/11 attacks. “It will be open-the question is, What degree of heroism will it take to get it open?”

-Sean Gardiner contributed to this article.

Write to Anton Troianovski at anton.troianovski@wsj.com.

1. When will the World Trade Center (WTC) memorial to the 9/11 victims open?

2. What factor is presenting a safety risk to those visiting the WTC memorial?

3. What major issues need to be resolved before the memorial opens?

5. What conflict do the Mayor’s office (City Hall) and the NYPD have regarding visitors to the WTC memorial?

6. Why do you think Joe Daniels, president of the National September 11 Memorial & Museum, declined to comment on specific security measures being contemplated for the memorial site?

7. Visit the websites under “Background” below to read stories and watch videos from 9/11. Never forget the horror caused by Islamic extremists [and the reality of what happened on that day.] 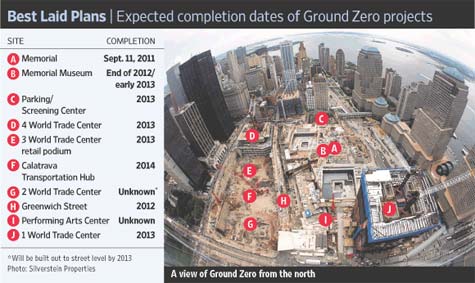