World News #1 – Pilots from U.S. air base in DJIBOUTI targeted with lasers 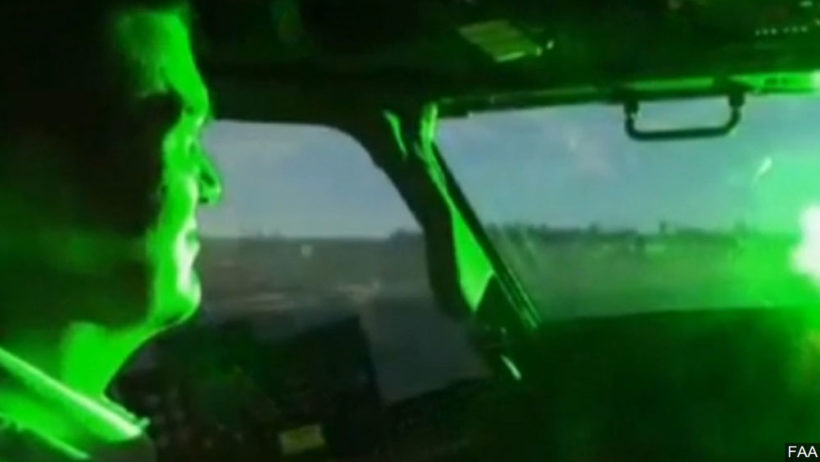 (by Sara Shayanian, UPI) — The U.S. military is warning its pilots to watch out for high-powered laser attacks from a Chinese air base in eastern Africa.

Officials say there have been multiple events “involving a high-power laser” just 2,400 feet from the base in Djibouti, a small country on the Horn of Africa.

Pentagon officials have warned pilots to “use extreme caution when transiting near this area.”

[The U.S. also issued a formal complaint to the Chinese government over the use of high-grade lasers near the military base in Djibouti that were directed at aircraft and resulted in minor injuries to two American pilots, the Pentagon said Thursday.

She estimated there have been fewer than 10 laser incidents in recent weeks, and the Pentagon sought the formal complaint because of the injuries and the growing number of instances the problem happened.

Marine Lt. Col. Chris Logan, a Pentagon spokesman, said that reports from pilots indicate that on three occasions the lasers were military grade and came from the Chinese base nearby.]

Chinese military officials said the lasers have not targeted U.S. aviators — but instead might have been used to scare off birds near the base or disrupt potential spy drones. Beijing also noted that China is a signatory to the Protocol on Blinding Laser Weapons, which bans the use of lasers that can cause permanent blindness.

“The Chinese and US bases in Djibouti are really close, so one could disturb the other if the two sides don’t have a proper communication mechanism,” Zhou Chenming, a Beijing-based military analyst, told the South China Morning Post.

“These incidents are not surprising as they represent an act just short of war, but indicate gross, intentional negligence, as well as complete disregard for aviation safety and international norms,” Meeks told The Wall Street Journal. [Djibouti is strategically located at the southern entrance to the Red Sea on the route to the Suez Canal.] The United States has a large air base in Djibouti that holds about 4,000 service members [including special ops forces], and the U.S. Joint Task Force-Horn of Africa at what’s known as Camp Lemonnier. The base is used to conduct security force assistance and counter-terrorism operations in Africa and Yemen.

China announced plans to build a military outpost in Djibouti in 2015, and formally opened the base last August — just eight miles from the U.S. base. [It is China’s first overseas military base. China says they built it there as a logistics hub for “peacekeeping” operations.]

This year, the U.S. military put countering China, along with Russia, at the center of a new national defense strategy. China’s First Overseas Military Base (opened in 2017) and nearby U.S. base Camp Lemonnier

Published at United Press Internatioal on May 3, 2018. [With bracketed excerpts from the New York Times and Reuters.]

1. For DJIBOUTI, give the following information:

2. For DJIBOUTI:
a) list the who, what, where and when of the news item
b) Why did the Pentagon issue a formal complaint to China?
c) What excuses did Chinese military officials make for the almost 10 laser attacks on U.S. pilots?
d) How do Chinese and American military analysts differ in their evaluation of the laser incidents?
e) What is Camp Lemonnier in Djibouti used for?
f) Why is China’s construction of a military base in Djibouti most likely aggressive toward the U.S.?