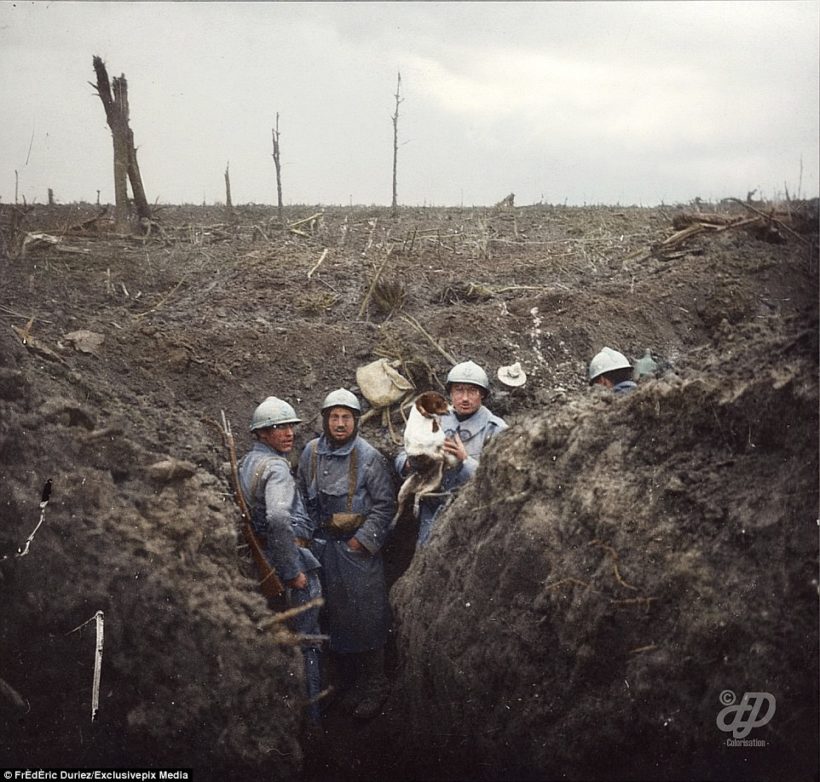 A French trench at Bois St Eloi in the Somme on October 28, 1916. In the background, German accessory defences are seen. More than a third of French soldiers (36 per cent) aged between 19 and 22 were killed during the First World War. (Photo is one of many First World War images colourised by graphic artist Frédéric Duriez.)

(Compiled from USA Today, VOA News) – More than 60 world leaders, including US President Donald Trump and Russian counterpart Vladimir Putin, will travel to Paris [this month] for commemorations of the end of World War I a century ago, French officials said in October.

When announcing the trip in August, White House Press Secretary Sarah Sanders said,  “The President’s participation in this event will highlight the sacrifices that Americans have made, not only during World War I but also in the century since, in the name of liberty.”

On November 10 — a day before the commemorations in Paris — French President Emmanuel Macron and German Chancellor Angela Merkel will also attend a ceremony near Compiegne, northern France, where the armistice ending the war was signed on November 11, 1918, Macron’s office said.

Armistice Day marks the signing of an agreement between U.S. allies and Germany at 11 a.m. on November 11, 1918 in France. The agreement brought an end to four years of fighting in Europe.

More than 116,000 Americans and nearly 1.4 million French troops died in World War I.

The main ceremony on November 11 will take place at the Arc de Triomphe war monument in Paris at 11 a.m. — marking the time when guns finally fell silent after four years of trench warfare and general European slaughter.

Later in the day, guests will be invited to participate in a Peace Forum, to be opened by Merkel, an event which France wants to turn into an annual multilateral peace conference.

Earlier in November, Macron spent a week touring the country’s WWI battlefields, including Verdun, scene of the longest-lasting battle which left at least 700,000 dead on both sides.

Only countries which “sent troops or workers to the European theaters of war” have been invited to the Paris ceremonies.

2. a) list the who, what, where and when of the news item
b) What is Armistice Day?
c) How many American soldiers died in WW1?
d) How did France determine which world leaders would be invited to the 100 year commemoration of the end of WW1?
e) Check out the information under “Background” below. Then watch the video under “Resources.” The Constable of the Tower of London explains, “When you’re celebrating or commemorating the 100th anniversary of the end of WW1…it’s important…to allow the public an act of collective remembrance.” Why do you think this is important?
CHALLENGE: Do you know how any of the following are associated with WW1?
-doughboys
-Western Front
-Pershing
-Triple Entente
-poppies
-Flanders Fields
-Woodrow Wilson
-“Over There”
-trenches
-tanks

View a map of the Front Lines of WW1

Take a WW1 quiz at USNews.com.