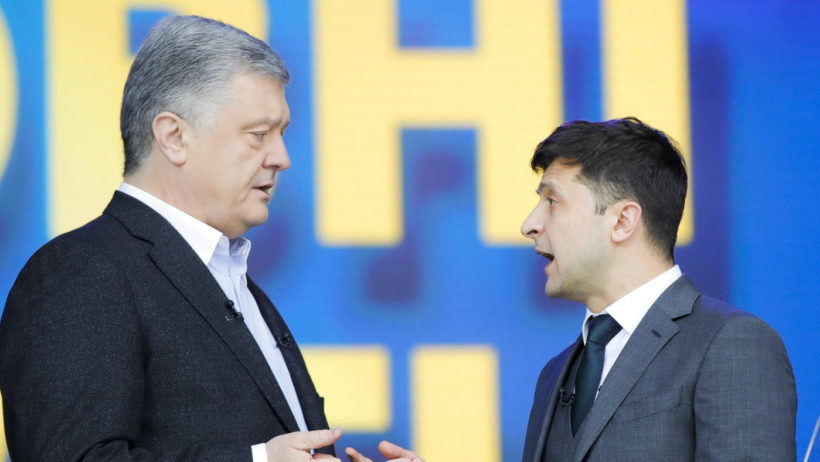 (by Alex Luhn, Daily Telegraph) – A comedian who plays the president on television has [won the presidency] in a landslide election against the incumbent in conflict-torn Ukraine, according to exit polls.

Volodymyr Zelenskiy, 41, had 73 per cent of the vote against 26 per cent for Petro Poroshenko, 53, who was elected after protests toppled a pro-Russian leader in 2014.

The story is remarkably similar to the hit show Servant of the People, where a teacher played by Mr. Zelenskiy is elected president on the strength of a viral video rant.

A lack of reform since the 2014 revolution has fuelled support for the outsider promising to fight corruption and leave after one term. Mr Zelenskiy easily won the first round of voting albeit without a majority.

But his superficial campaign of comedy shows and social media videos has offered little insight on how the political neophyte will achieve this with a parliament mostly allegiant to President Poroshenko.

“Thank you to all Ukrainians, wherever you are located. I promise I will never let you down,” Mr. Zelenskiy said in a victory speech that lasted less than three minutes. “To all citizens of post-Soviet countries: Look at us. Anything is possible,” he added.

President Poroshenko congratulated his opponent on victory shortly after the polls closed, saying the election had been fair and shown Ukraine to be an “independent European country.”

The candidate previously betrayed his inexperience when he posed with his filled-in ballot on Sunday, a violation of election laws that earned him a police citation. Volodymyr Zelenskiy displays his ballot while standing in front of the media at a polling station in Kiev, Ukraine April 21, 2019. (Photo: Reuters/Volodymyr Petrov)

Now the poorest country in Europe, Ukraine and its 42 million people stand at the forefront of tensions between Russia and the West, fighting a low-level conflict with Moscow-backed separatists that continues to claim lives.

Mr. Zelenskiy has said he would meet Russian president Vladimir Putin and involve the UK and United States in new talks to solve the conflict, but also promised not to lift the economic blockade on the separatist-held areas.

Sunday’s vote ended a dirty campaign that culminated in a venomous debate at Kiev’s 70,000-seat Olympic stadium on Friday evening. … A format where the candidates asked questions of each other quickly devolved into recriminations touching on the scandals in which both have been embroiled.

Returning to central motifs of his campaign, President Poroshenko said Mr. Zelenskiy was unprepared to stand up to Vladimir Putin and suggested he was a puppet of self-exiled oligarch Ihor Kolomoisky, owner of the channel that broadcasts his shows.

Mr. Zelenskiy pointed out that the president was the owner of a candy-making empire that until 2017 had a factory in Russia, accusing him of enriching his friends while in power. He repeatedly threatened to put Mr Poroshenko on trial.

The spectre of Mr. Kolomoisky will continue to loom over Mr. Zelenskiy as president, however.

Just days before the vote, a court ruled that the oligarch’s [Zelenskiy supporter Ihor Kolomoisky’s] PrivatBank was illegally nationalized after a $5.5 billion hole was found in its accounts. Any move to hand the bank back is sure to be opposed by the international monetary fund, a vital creditor for Ukraine. …

Published at telegraph .co .uk on April 24. Reprinted here for educational purposes only. May not be reproduced on other websites without permission from The Telegraph.

2. For UKRAINE:
a) list the who, what, where and when of the news item
b) By what percentage did Volodymyr Zelenskiy beat President Poroshenko?
c) What promises did Mr. Zelenskiy make prior to the election?
d) In Friday’s debate prior to the election, each candidate questioned the other and pointed out possible conflicts of interest the other has. What are they?
e) Consider the “Background” below the questions. Why did voters overwhelmingly turn against Poroshenko? What caused such a large percentage of voters to vote against him?
f) There were originally 38 presidential candidates. The popular and personable TV comedian won. Why do you think voters overwhelmingly vote for Zelenskiy – a man who doesn’t appear to have any real life experience in running anything or leading anything and who gave no specifics on how he intends to “fight corruption?”
g) What do you think? Can a comedian succeed as president? Will others control his administration (and he will just be the figurehead)? Or – as President Poroshenko accused – as a puppet of Ukranian oligarch Ihor Kolomoisky? Incumbent President Petro Poroshenko, 53, campaigned as a wartime president who brought economic stability to the country despite the ongoing threat of Russian attacks. But he failed to convince voters he had done enough to combat the country’s endemic corruption. …

The popular series seems to have been the catalyst for creating what is now the political phenomenon of Zelensky as the actual president of Ukraine, said Volodymyr Fesenko, a political analyst with the Kiev-based think tank Penta Center for Political Studies.

Two years after the start of Zelensky’s hit show, Poroshenko’s administration began facing a new domestic crisis: growing public distrust in the government ahead of this year’s presidential and parliamentary elections.

Since the nation’s independence from the Soviet Union in 1991, Ukrainian politics has been dominated by a political elite that many voters believe use their power to enrich their pockets while the rest of the country struggles economically.

The mass street protests in Kiev in 2014, which became known as the Maidan revolution, were a fight against this entrenched, corrupt system and a demand that the government reform into a Western-style democracy, steering away from the kind of authoritative government of Russia’s Putin.

Maidan raised the hopes of many Ukrainians that the country was headed in a new direction and out of Russia’s orbit. But economic reforms proved difficult, and residents saw an increase in the cost of household utilities, such as gas, electricity and heat. As the country’s economy recovered, most Ukrainians weren’t reaping the benefits.

Many Ukrainians complained that politicians like Poroshenko were getting richer, while ordinary people watched their utility bills eat up more of their monthly salaries.

In May 2017, a political party bearing the same name as Zelensky’s hit television show was officially registered. Zelensky announced on New Year’s Eve that he was running for president, shocking most Ukrainians.

When asked why he made the leap from entertainment to politics, Zelensky said he saw it as his duty to his country.

“A real vacuum has appeared in the political sphere in which people don’t trust any of the current top politicians,” he told a group of foreign journalists in March, one of the few interviews he’d given during his campaign. “I want to do something. I want to change it.”

Zelensky ran as an anti-establishment candidate and accused Poroshenko of not doing enough to combat corruption. Instead of campaign stops, Zelensky continued to travel across the country performing with Kvartal 95, a variety show that frequently makes politics and politicians the butt of its jokes.

He used a savvy social media campaign that won over young voters. He rarely spoke to the press. At a debate with Poroshenko two days before the election, Zelensky posed questions that were crowd-sourced from voters over his social media channels.

In the first round of voting in March, Zelensky had a double-digit lead over Poroshenko, an upset in which he beat out 38 other candidates on Ukraine’s longest ballot list in history.

As the newcomer with a vaguely defined political persona, Zelensky provided a blank canvas upon which Ukrainians could paint the candidate however they choose to view him, Fesenko said.

Zelensky’s critics say he is a showman with no ability to realize his vague promises to reform the country’s political system. His platform lacks details, critics say, on how he will stop the military conflict on Ukraine’s eastern flank with Russian-backed separatist insurgents who have declared independence from Kiev. Zelensky has said he’s not afraid to meet Putin. His opponents think that’s naive.

Zelensky’s advisors include several former members of Poroshenko’s team….who left the administration after meeting opposition from the president on what they deemed important reforms.

One of them, Oleksandr Danyliuk, a former finance minister, said that uncertainties about Zelensky were understandable, but that he believed the newly elected president to be a quick study and effective at conflict resolution.

The warnings from Poroshenko’s team about Zelensky’s inexperience and potential for reverting the country to pre-Maidan levels were just hysteria, Danyliuk said.

“It’s not certain he will succeed at everything,” he said. “But at least Ukraine has a chance to succeed now, which we don’t have in the current government.”