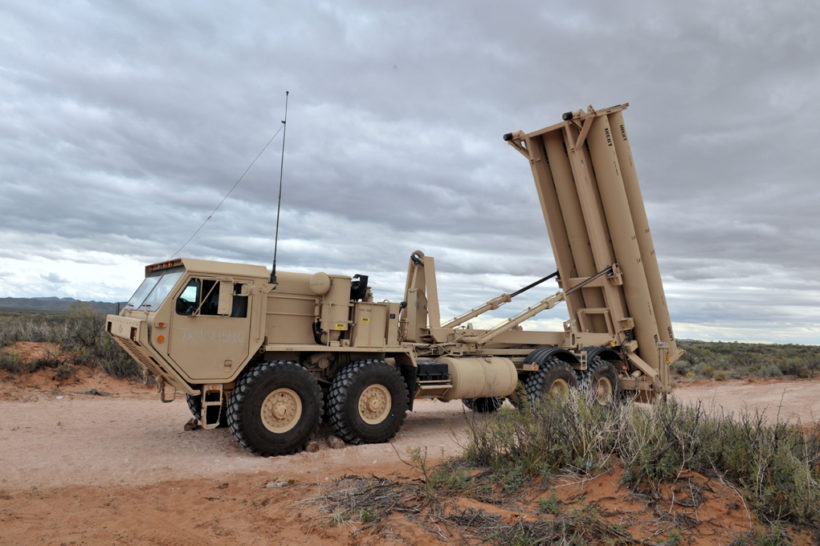 A THAAD launcher
The Terminal High Altitude Area Defense (THAAD) element provides the Ballistic Missile Defense System (BMDS) with a globally-transportable, rapidly-deployable capability to intercept and destroy ballistic missiles inside or outside the atmosphere during their final, or terminal, phase of flight.

(by Andrea Shalal in Berlin and Rami Ayyub and Dan Williams in Jerusalem, Reuters) – The U.S. military has deployed its most advanced air and missile defense system to Israel for the first time, U.S. and Israeli military officials said on Monday.

“The American THAAD system is considered among the most advanced systems in the world, and together with our defense systems, we are stronger in dealing with threats, close or distant, emanating from all areas of the Middle East,” he said.

The move comes amid increased tensions between Israel and Iran…. Iran’s foreign minister said he could not rule out the possibility of military conflict between the two countries.

The U.S. military said the decision to rapidly move the THAAD system to Israel was intended “as a demonstration of the United States’ continued commitment to Israel’s regional security.”

“THAAD is the most advanced integrated air and missile defense system in the world, and this deployment readiness exercise demonstrates that U.S. forces are agile and can respond quickly and unpredictably to any threat, anywhere, at any time,” U.S. European Command said in a statement.

Lockheed Martin, the biggest U.S. arms maker, builds and integrates the THAAD system, which is designed to shoot down short-, medium- and intermediate-range ballistic missiles. Raytheon, another U.S. firm, builds its advanced radar.

As part of the deployment, U.S. forces will work at various locations in Europe, the United States and in Israel to operate the system in close cooperation with the Israel Defense Forces (IDF), it said. U.S. officials declined to say how quickly the system was moved to Israel from its home base at Fort Bliss, Texas.

“The advantage from the Israeli point of view is that we have an opportunity to integrate it into our systems and simulate different scenarios,” he said.

The IDF said the deployment was defensive in nature and not related to any specific current event.

In November, Saudi Arabia [purchased] 44 THAAD launchers, missiles and related equipment from the United States in a separate deal valued at $15 billion.

Published at Reuters on March 4. Reprinted here for educational purposes only. May not be reproduced on other websites without permission from Reuters.

2. For ISRAEL:
a) list the who, what, where and when of the news item
b) What is the U.S. military’s THAAD?
c) What is the purpose of sending it quickly to Israel?
d) From what locations will the U.S. operate this system?
e) The THAAD system intercepts missiles with 100% success rate. Check out the map of the Middle East. Why do you think Israelis are most likely happy to have this system in place?
CHALLENGE: The first two Muslim women to be elected to the U.S. House of Representatives (both in 2018; both Democrats) have criticized the U.S.’s long-standing support for our ally Israel. (Conservatives have called the Representatives out on these remarks; two Democrats have done so as well.) What effect do you think it would have on the security of Israel if a majority of Democrats in Congress held the same anti-Israeli views and voted along those lines?

The THAAD is a missile interceptor that can hunt and blast incoming missiles with a 100% success rate. Simply put, it’s one of the most advanced missile-defense systems on Earth. The THAAD system was deployed to South Korea in 2017 – a move opposed by China and North Korea. (from an Oct. 2015 Business Insider article)