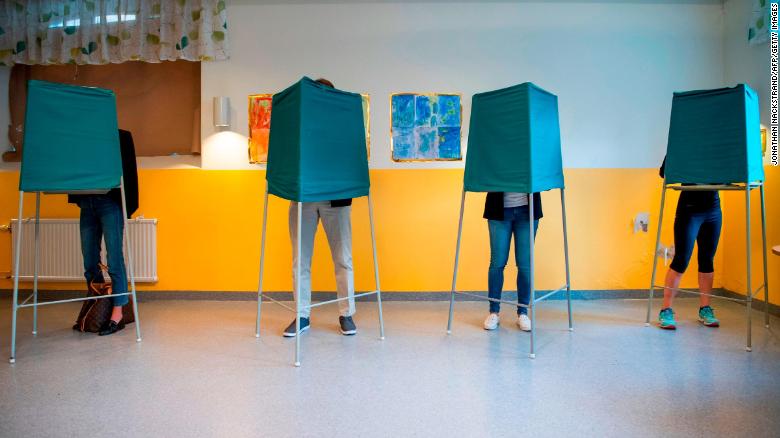 The governing center-left coalition gained about 40 percent of the vote, while the center-right group attracted the same amount of support. Making significant gains was the [now third largest] Sweden Democrats Party — which is supported by voters alarmed by the huge influx of economic migrants from Africa and the Middle East that have flooded their cities not only in Sweden but also other European Union countries. The Sweden Democrats won 18 percent of Sunday’s vote, up from 13 percent in the last election.

Due to the close results, the parties must now work together to form a government. Sweden uses a proportional representation form of government where seats are allocated based on the share of the vote.

Prime Minister Stefan Lovfven’s Social Democrats Party has a coalition with the Green and Left parties. The group maintained a one-seat lead, but fell short of the 175 seats needed to govern. They will have to negotiate with the right-wing parties to find a workable government.

“We have two weeks left until parliament opens,” Lofven said. “I will work on calmly, as prime minister, respecting voters and the Swedish electoral system.”

Nicholas Aylott, a political science professor at Sodertorn University…said it will be difficult for mainstream parties to treat the Sweden Democrats as equals.

“They’re not a very old party, they were only formed at the end of the [1980s] and they [had some association with] Neo-Nazi organizations,” Aylott said. “That history means something, no matter how much the party professors to have changed and maybe really has changed.”

Sweden Democrats party leader Jimmie Akesson, though, said the group has zero tolerance for racism and that several members have been expelled.

The party…attracts working class men but [also has] attracted more women and higher-income voters. The country has recently seen an flood of asylum seekers that Sweden Democrats say puts a strain on social services. [The influx of economic migrants, mostly young men in their 20s from Africa and the Middle East, taken in by the liberal government, became highly politicized following a steady increase in new arrivals. In 2015, Sweden, a country of 10.1 million people, took in more than 160,000 asylum-seekers – many of who did not qualify for asylum status.]

Emboldened by Britain’s bold exit from the European Union in 2016, the Sweden Democrats are pushing for a “Swexit” referendum of their own.

“We will increase our seats in parliament and we will gain huge influence over what happens in Sweden during the coming weeks, months and years,” Akesson said at a party rally.

2. For SWEDEN:
a) list the who, what, where and when of the news item
b) What percentage of the vote did each of the three top parties/coalitions win?

Visit the website for the Social Democrats party, or

Read about all of the political parties in Sweden.

Read about the Swedish system of government.