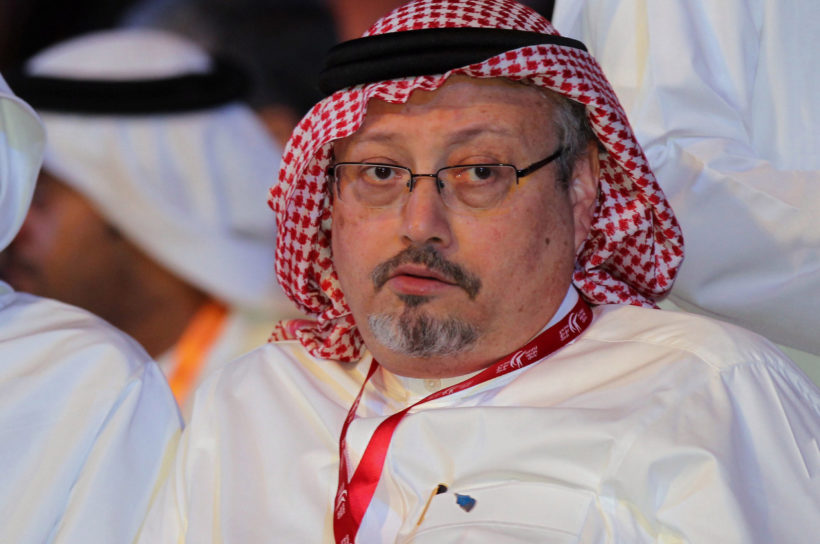 (by Tulay Karadeniz, Yara Bayoumy, Reuters) ANKARA/WASHINGTON – Saudi Arabia’s King Salman on Monday ordered an internal probe into the unexplained disappearance of prominent journalist Jamal Khashoggi as a joint Turkish-Saudi team was set to search the Saudi consulate in Istanbul where he was last seen on Oct. 2.

U.S. President Donald Trump said meanwhile he had spoken with King Salman about Khashoggi, a critic of the kingdom’s policies, and that he was sending Secretary of State Mike Pompeo to meet the king immediately.

Trump also said Salman denied “any knowledge of whatever may have happened” to Khashoggi (who disappeared after he went to the Saudi consulate in Istanbul two weeks ago) and told him the Saudis are working closely with Turkey on the case.

Khashoggi, a U.S. resident and Washington Post columnist, vanished after entering the consulate to get marriage documents. [His Turkish fiancee, Hatice Cengiz, who was waiting outside, said he never re-appeared. ] Turkish officials have said authorities believe he was murdered and his body removed, allegations that Saudi Arabia has denied.

The case has provoked an international outcry, with Trump threatening “severe punishment” if it turns out Khashoggi was killed in the consulate and European allies urging “a credible investigation” and accountability for those responsible. Saudi Crown Prince Mohammed bin Salman is pictured during a visit to the Pentagon on March 22, 2018. (Cliff Owen/AP)

A Turkish diplomatic source said investigators would inspect the consulate on Monday afternoon, after delays last week when Turkey accepted a Saudi proposal to work together to find out what happened to Khashoggi.

“The King has ordered the Public Prosecutor to open an internal investigation into the Khashoggi matter based on the info from the joint team in Istanbul,” a Saudi official, not authorized to speak publicly, told Reuters.

Asked when the public prosecutor could make an announcement about the investigation, the official said: “He was instructed to work quickly.”

Saudi Arabia has responded to Western statements by saying it would retaliate against any pressure or economic sanctions “with greater action”, and Arab allies rallied to support it, setting up a potential showdown between the world’s top oil exporter and its main Western allies.

King Salman and Turkish President Tayyip Erdogan spoke by telephone on Sunday evening and stressed the importance of the two countries creating a joint group as part of the probe. …

Khashoggi, a familiar face on Arab talk shows, moved to the United States last year fearing retribution for his criticism of Prince Mohammed, who has cracked down on dissent with arrests.

The Saudi consulate referred Reuters to authorities in Riyadh who did not respond to questions about the 15 Saudis.

Published at Reuters on October 15. Reprinted here for educational purposes only. May not be reproduced on other websites without permission from Reuters.

NOTE: Before answering the questions below, read the “Background” and watch the videos under “Resources.”

2. For SAUDI ARABIA:
a) list the who, what, where and when of the news item
b) What did King Salman tell President Trump when questioned about the disappearance?
c) What do Turkish officials say happened to Mr. Kashoggi?
d) What response did President Trump say the U.S. would take if the Saudi government was responsible for Kashoggi’s murder?
e) Following the disappearance of Kashoggi, when questioned by reporters, President Trump said that he is against cancelling a $110 billion arms deal with Saudi Arabia because of the presumed murder of the journalist. He said,

The president said by taking such a step, the US would be hurting itself.

“I actually think we’d be punishing ourselves if we did that. There are other things we can do that are very, very powerful, very strong…” he said.

In addition to the $110 billion arms deal, Trump said the Saudis are going to invest $450 billion in the US through their companies. “And all of these — Raytheon, and General Electric, and General Motors — they were there getting contracts for $25 billion, $30 billion, $40 billion…” he said.

President Trump sent U.S. Secretary of State Mike Pompeo to Saudi Arabia today to speak directly with King Salman to get to the bottom of the disappearance of Kashoggi.
Ask a parent: Do you think the Trump administration should have canceled the deals with Saudi Arabia right now? Please explain your answer.   –If it turns out that Saudi Arabia admits to the killing, or the audio from the consulate is released proving he was killed by Saudis, would you change your answer? Please explain.

CHALLENGE: This is a most horrific story. If Kashoggi was really murdered, and in such a manner, and MbS (Crown Prince Mohammed bin Salman bin Abdulaziz Al Saud) is behind his murder, readers have suggested his father the King should remove him from his position. (Don’t expect more than that – it is Saudi Arabia.) (Read the UK Spectator article “Death of a dissident: Saudi Arabia and the rise of the mobster state.”  Why do you think the media omitted Kashoggi’s link to the Muslim Brotherhood?

A number of high profile business and media groups have pulled out of a top investment summit in Saudi Arabia in the wake of the disappearance and feared state-sanctioned murder of journalist Jamal Khashoggi.

Future Investment Initiative, nicknamed the ‘Davos of the desert’, is due to begin in the Saudi capital Riyadh on October 23, with speakers including JP Morgan Chase CEO Jamie Dimon and U.S. Treasury Secretary Steve Mnuchin.

Foreign capital is key to Saudi plans for economic diversification and job creation. But concern over the disappearance has seen media organizations and a growing number of attendees pull out of a “Davos in the Desert” investment conference set for Oct. 23-25, which has become the biggest show for investors to promote Saudi Crown Prince Mohammed bin Salman’s reform vision.

On Monday, a source familiar with the matter said Blackstone CEO Stephen Schwarzman and BlackRock Chief Executive Larry Fink were pulling out of the summit. Saudi Arabia’s Public Investment Fund (PIF), which hosts the conference, has tentatively committed $20 billion to an infrastructure investment planned with Blackstone Group. Prince Mohammed told Reuters last year that Blackstone and BlackRock Inc were planning to open offices in the kingdom.

Bahrain [a close Saudi ally] called for a boycott of Uber, in which PIF has invested $3.5 billion, after its chief executive officer, who was listed as a speaker, said he would not attend the conference…. [unless the Saudi government come up with a plausible explanation for the Washington Post journalist’s disappearance].

U.S. mass media conglomerate Viacom Inc CEO Bob Bakish, and billionaire Steve Case, one of the founders of AOL, have also said said they were no longer going to Riyadh.

CNN, the Financial Times, the New York Times as well as reporters and editors from the Economist and CNBC said they were no longer participating in the conference, which relied heavily on journalists to moderate top sessions.  (from the Reuters report above and a UK Daily Mail report)

Watch an Oct. 11 Wall Street Journal Report – “What We Know About Khashoggi”