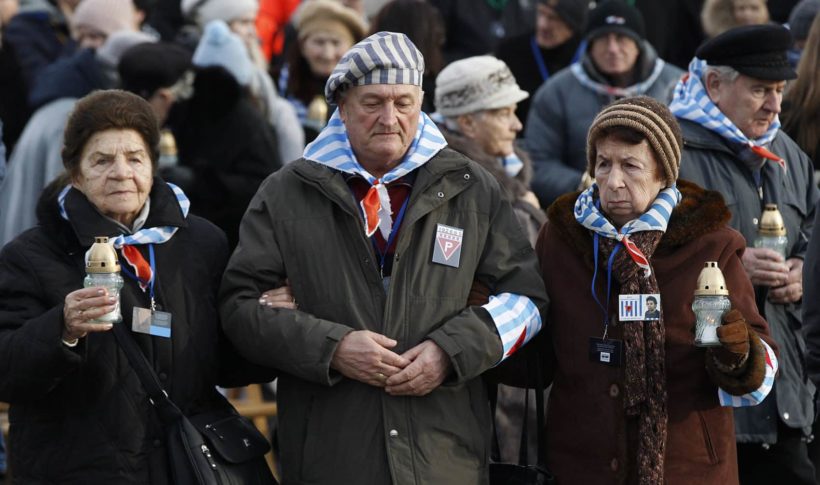 Dozens of former prisoners, priests and staff of the Auschwitz Memorial laid wreaths at the former German Nazi concentration and extermination camp to commemorate the 74th anniversary of the camp’s liberation, on January 27, 1945.

They reunited at the so-called “wall of death” at Auschwitz Memorial’s Block 11, against which Nazis executed thousands of prisoners. The main commemoration event was held at the camp’s “central sauna,” where new inmates were stripped, had their heads shaved and were tattooed with a number on their arms by Nazis guards. Prayers and tributes were paid at the Monuments of the Victims.

The Auschwitz Birkenau camp operated from 1940 until its liberation by the [Soviet] Red Army on January 27, 1945. Until the liberation, German Nazis murdered approximately 1.1 million people in Auschwitz, mostly Jews, but also Poles, the Roma, Soviet prisoners of war and people of other nationalities. The camp was declared a national memorial site in 1947.

For the world today, Auschwitz is a symbol of the Holocaust and atrocities of Hitler during World War II. January 27 was adopted as the International Holocaust Victims Remembrance Day by the United Nations in 2005. According to the UN, the purpose of this is not only to remember the victims of the Holocaust but also to promote the education of the Holocaust throughout the world.

On January 23, the European Union Parliament held a ceremony in Brussels to mark the upcoming International Holocaust Remembrance Day. European Parliament President Antonio Tajani of Italy, Prime Minister of Romania Viorica Dăncilă and Chair of the Jewish Agency Issac Herzog commemorated the victims of the Holocaust.

“The Eurobarometer published yesterday that 50% of the Europeans see antisemitism as a problem in their country,” said Tajani as he opened the ceremony. “This is unacceptable for us. We must act and react, we must reach out to citizens, in particular, the young people. They are the future of Europe. Our schools and universities should not only provide skills and knowledge. They should teach the importance of solidarity, freedom and respect for human dignity.”

[President Trump added to the chorus of voices decrying the Holocaust on Sunday. In his “Message on International Holocaust Remembrance Day” he wrote:

“To remember these men and women — those who perished and those who survived — is to strive to prevent such suffering from happening again.  Any denial or indifference to the horror of this chapter in the history of humankind diminishes all men and women everywhere and invites repetition of this great evil.”].

This year’s anniversary comes amid growing concern among survivors and world leaders alike that the Holocaust has begun to slip from international, collective memory — particularly among younger generations. In remarks both before and on the day of the anniversary, leaders also lamented recent spikes in hate-inspired violence.

According to a poll released Sunday by The Holocaust Memorial Day Trust, five percent of adults in the United Kingdom don’t believe the Holocaust happened, and 64 percent either don’t know the number of Jews murdered or underestimate that number.

In a recent op-ed for the newspaper Die Welt, Germany’s foreign affairs minister, Heiko Maas, wrote that with fewer people directly connected to the past, Germany must continue to teach its young people about the Holocaust.

The UK Daily Mail reports that over the past year, Germany has seen a rising number of often violent attacks against Jews carried out by neo-Nazis and Muslims, prompting the government to appoint a commissioner against anti-Semitism and to start funding a national registration office for anti-Semitic hate crimes.

In the United States, a poll from the Conference on Jewish Material Claims Against Germany conducted last year finds four out of 10 people don’t know what Auschwitz was. That proportion rises to two-thirds for millennials.

Compiled from reports by Francesca Paris at NPR and from EuroNews on Jan. 27. Reprinted here for educational purposes only. May not be reproduced on other websites without permission.

2. For POLAND:
a) list the who, what, where and when of the news item
b) When was International Holocaust Remembrance Day established?
c) What is the two-fold purpose of this day?
d) Polls in the UK, US and Canada show that a large percentage of young people don’t know what Auschwitz was and don’t know how many Jewish people were murdered by Hitler. Even more concerning is the statistic that five percent of adults in the United Kingdom don’t believe the Holocaust happened.

A poll by the Holocaust Memorial Day Trust found that 5% of British adults do not believe the Holocaust took place and one in 12 believes its scale has been exaggerated, a survey has found.

In the survey, 45% of those polled said they did not know how many people were killed in the Holocaust, while one in five (19%) believed fewer than two million Jews were murdered. The actual figure was six million.

Holocaust survivor Steven Frank, who was one of 93 children to survive the Theresienstadt camp in Czechoslovakia along with his two brothers, said the survey’s findings were “terribly worrying.”

His father, who helped hide Jews as part of the Dutch resistance, was arrested in Amsterdam and gassed at Auschwitz, in Nazi-occupied Poland, in January 1943.

Mr Frank, who now lives in Hertfordshire, England said he was “surprised” by the number of people who do not believe the Holocaust took place.

The 83-year-old said: “In my experience, people don’t have a solid understanding of what happened during the Holocaust and that’s one of the reasons I am so committed to sharing what happened to me.

“At one of my talks, I met someone who said the Holocaust didn’t happen. The only way to fight this kind of denial and anti-Semitism is with the truth – I tell people what happened, what I saw and what I experienced.”

He added: “Education is so important. If we ignore the past, I fear history will repeat itself.”

What do you think is the best way to inform/educate the world about the truth of the atrocities of the Holocaust? Be specific.

For the Holocaust Remembrance Museum in Israel, go to yadvashem.org or visit Yad Vashem’s youtube page