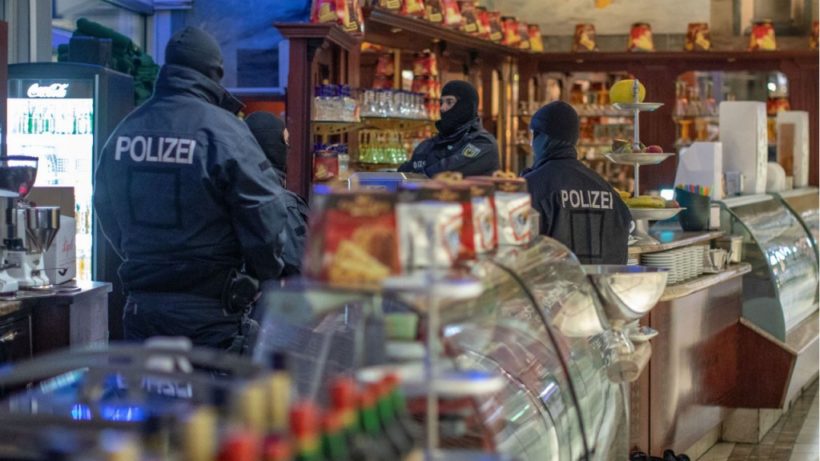 Police raid a cafe in Duisburg, western Germany, on December 5 as part of an international sting against suspected members of the notorious 'Ndrangheta mafia. (Christoph Reichwein, DPA, AFP)

The “unprecedented” crackdown on the group based in Calabria, southern Italy, came just a day after Italian police arrested the new boss of the separate Sicilian mafia. [On Tuesday, Italian police arrested new Cosa Nostra boss Settimino Mineo and dozens of other suspects in Sicily in a major swoop. Mineo, 80, was detained with at least 45 others just before he was due to be appointed official heir to notorious mafia boss Toto Riina, who died in prison last year.] Settimino Mineo (C), jeweler and new head of the Sicilian mafia, is escorted by carabinieri as he exits a police station after his arrest, in Palermo on December 4, 2018. (AFP)

“They are not the only ones able to operate across borders; so are Europe’s judiciary and law enforcement communities.”

He said the “unprecedented and extraordinary result,” the fruit of a two-year operation, targeted “dangerous members of the ‘Ndrangheta family deeply involved in drug trafficking and money laundering.”

The ‘Ndrangheta — which derives its meaning from the Greek word for heroism — is made up of numerous village and family-based clans in Calabria, the rural, mountainous and under-developed “toe” of Italy’s boot.

Despite intense police attention and frequent arrests, the organization has continued to extend its reach.

It has surpassed Sicily’s Cosa Nostra and the Naples-based Camorra in influence thanks to control of the cocaine trade and is the sole mafia organization to operate on all continents, according to anti-mafia prosecutors.

In total 41 people were arrested in Italy, 21 in Germany, 14 in Belgium, five in the Netherlands and two in Luxembourg, with operations still underway, Eurojust said.

Italian police said the sweep targeted the ‘Ndrangheta and its “projections across South America.”

But he warned that it was “just a first step,” saying the arrests were “nothing for the ‘Ndrangheta, there are thousands of people who should be arrested and billions that should be seized.” …

From an AFP (Agence France-Presse) report published at France24 .com on December 5. Reprinted here for educational purposes only. May not be reproduced on other websites without permission from France24.

1. For ITALY, give the following information:

NOTE: Before answering the following questions read the “Background” below.

2. For ITALY:
a) list the who, what, where and when of the news item
b) In what countries were the mobsters arrested?
c) For what crimes were they arrested?
d) What is the ’Ndrangheta? Why is this group so significant?
e) What effect will the arrests have on the “Ndrangheta’s operations?
f) What separate arrests took place on Tuesday, the day before the ’Ndrangheta arrests?

In Germany, Wednesday’s operation focused on restaurants, offices and apartments, mainly in the states of North Rhine-Westphalia and Bavaria region.

Dutch prosecutors said the investigation began after they noticed money laundering at two Italian restaurants in the southern Netherlands that showed criminal links with Germany and Calabria, home of the ‘Ndrangheta.

Using an often family-based network spread out around Europe, drugs would come into the Dutch port of Rotterdam and the Belgian port of Antwerp before being moved around the continent.

Prosecutor Fred Westerbeke said they had also probed ice cream parlours, adding that together with restaurants “the suspicion is that the mafia organisation is laundering money through these establishments and they are used as a cover for their criminal organizations.”

He also confirmed that there had been raids in Suriname, a small South American country that was once a Dutch colony.

Dutch NOS television said the ‘Ndrangheta were mainly active in the Netherlands in drug smuggling through the country’s huge flower export market.

The Belgian operations were concentrated on the Limburg area, home to many people of Italian descent who moved there after World War II to work in coal mines, Belgian prosecutors said.

The European police agency Europol said it was a “decisive hit against one of the most powerful Italian criminal networks in the world.”