World #1 – Iran: Men ordered not to look at women during Ramadan 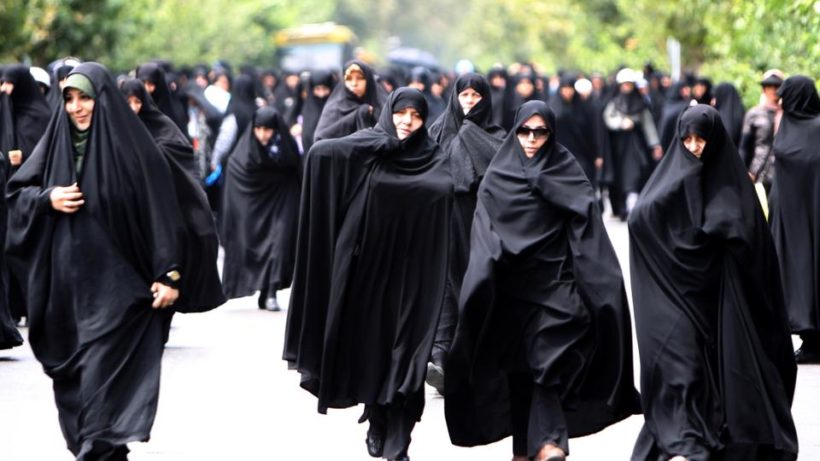 (by Ahmed Vahdat, The Telegraph) – Men in Iran have been ordered not to look at women during Ramadan as part of a round of draconian restrictions imposed by the increasingly isolated regime.

In a sign of frustration with growing civil discontent and economic pain caused by U.S. sanctions, hardliners in Iran’s government are forcing through unusually strict social diktats to bring people into line.

The country’s judiciary has announced that those eating in public during the fasting period are also in breach of laws and will be prosecuted.

“My personal advice to women is to respect the hijab even more than before and men must avoid looking directly at female passersby,” Gholam- Hossein Esmaili, a judiciary spokesperson said.

“Anyone ignoring these instructions during the Ramadan will be committing an offense and should expect some punishment from the law enforcement units.”

The morality police in Iran added that they will now arrest anyone playing music on their car radio and will tow their car away and hand them a heavy fine.

The new restrictions come as U.S. is building up its military presence in the Persian Gulf, while the public concern inside Iran about the economic consequences of sinking relations with Washington grows.

On Saturday the US ratcheted pressure further by announcing it was deploying a Patriot missile-defense system to the Middle East, adding that more Navy ships with amphibious vehicles would join a strike group being led by the USS Ronald Reagan aircraft carrier in the Persian Gulf. US B-52 bombers have arrived at a base in Qatar, the Pentagon said.

Iran flexed its own muscles last week by threatening to begin enriching uranium if European powers don’t fight to keep the nuclear deal alive after Donald Trump walked away from the agreement and imposed harsh sanctions.

President Rouhani said the remaining countries in the deal must “find a way to protect Iran’s oil and banking industries from US sanctions” or he would put Iran on the path to nuclear weapons. Last week the value of US dollar against the national currency Rial reached record high with one dollar selling at 16000 Rials on black markets.

Iran’s economy is beset by a near 50 percent inflation, its currency has almost collapsed, labour and civil servants strikes are commonplace and the hardline establishment faces an increasing women’s rights movement.

Recent nationwide floods have also left farming lands of 26 provinces in ruin and diseases threatening millions in the rural areas of Iran.

Recent changes in the country’s leadership structure suggest an internal clampdown on any open challenge to the regime’s authority at home.

Last month the supreme leader Ayatollah Ali Khamenei appointed the fiery General Hossein Salami as the new commander of the Revolutionary Guard, and the hardliner clergyman Ebrahim Raeesi as the chief judge. However, senior Iranian officials have warned about the public discontent turning into street protests, as food and fuel rationing similar to those during the war with Iraq have been suggested by the government as options to deal with the shortages. …

Published at telegraph .co .uk on May 11. Reprinted here for educational purposes only. May not be reproduced on other websites without permission from The Telegraph. 2. For IRAN:
a) list the who, what, where and when of the news item
b) What did a spokesman for the Iranian judiciary tell men and women to do? What will happen to those who disobey?
c) What action will the morality police take against people who play music on their car radio?
d) How are U.S. sanctions and the Trump administration’s tough approach to the Iranian government’s aggression affecting Iran?
e) What actions has the “supreme leader” Ayatolllah Kahmenei taken regarding leadership recently?
f) What is your reaction to the Iranian government’s warning to men and women, and to people who want to listen to music in their cars?

Hijab is not a choice in most Muslim-majority countries:

Read about brave women in Iran who defied the law because they want to be  free.