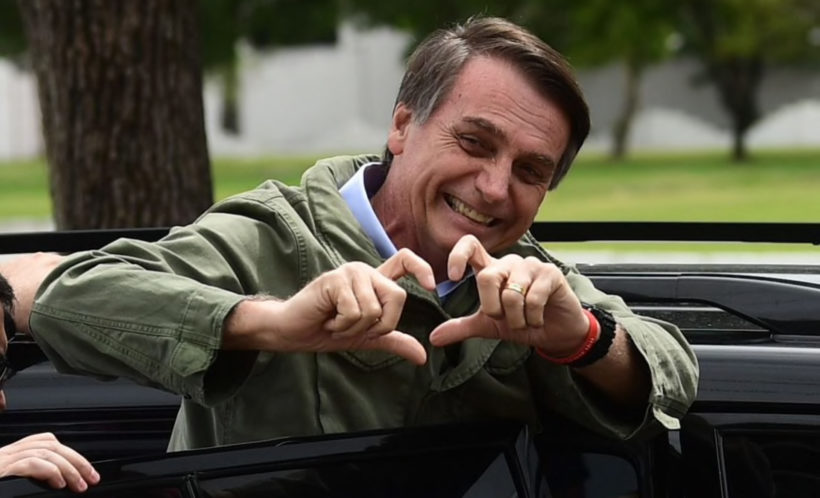 Brazilians on Sunday propelled right-wing candidate Jair Bolsonaro to the presidency, marking a dramatic swing to the right in the world's fourth-largest democracy. (Photo: AFP)

(by Anthony Boadle and Gabriel Stargardter, Reuters) BRASILIA/RIO DE JANEIRO – Conservative lawmaker Jair Bolsonaro won Brazil’s presidential election on Sunday, promising to clean up politics, shrink the state and crack down on crime, in a dramatic swing away from the left in the world’s fourth-largest democracy. …

In his first public comments after his landslide victory, he pledged to respect democratic principles, but said he wanted to change the country’s direction.

“We cannot continue flirting with socialism, communism, populism and leftist extremism … We are going to change the destiny of Brazil,” Bolsonaro said in an acceptance address, promising to root out graft and stem a tide of violent crime.

An outspoken admirer of U.S. President Donald Trump, Bolsonaro also pledged to realign Brazil with more advanced economies rather than regional allies, overhauling diplomatic priorities after nearly a decade and a half of leftist socialist rule.

Trump called Bolsonaro to wish him good luck soon after his electoral victory, auguring closer political ties between the two largest nations in the Americas — both now led by conservative populists promising to overturn the political establishment.

Bolsonaro won 55.2 percent of votes in the run-off election against left-wing socialist Fernando Haddad of the Workers Party (PT)’s 44.8 percent. …

The 63-year-old congressman’s rise has been propelled by rejection of the leftist Workers Party (PT) that ran Brazil for 13 of the last 15 years. The party was ousted from power in 2016 in the midst of a deep recession and political graft scandal. [In 2016, the Senate voted to impeach socialist President Dilma Rousseff, finding her guilty of breaking budgetary laws and removing her from office. Vice President Michel Temer was made Acting President during her suspension and was then sworn in as president once she was impeached. Ms. Rousseff’s predecessor and mentor, Luiz Inácio Lula da Silva, popularly known as Lula, is a former union leader who served as president from 2003 to 2011. Currently in jail, Lula was arrested in April 2018 and sentenced to 12 years in prison, having been charged with money laundering. Many Brazilians were angry with the Workers’ Party for its role in the mammoth graft scheme uncovered by the “Operation Car Wash” investigation which uncovered a multibillion-dollar scheme to trade public contracts and official favors for bribes and kickbacks. ]

In his acceptance speech, Bolsonaro promised to govern according to the Bible and the country’s constitution. [“That is a promise, not of a party, not the vain word of a man. It’s a promise to God,” he said, standing next to his wife and many cheering supporters.]

The live broadcast of Bolsonaro’s words was preceded by a prayer led by lawmaker, pastor and gospel singer Magno Malta, underscoring Bolsonaro’s ties to evangelical churches that backed him for supporting their conservative social agenda. …

He has vowed to crack down on crime in Brazil’s cities and farm belt by granting police more autonomy to shoot suspected criminals. He also wants to let more Brazilians buy weapons to fight crime. [He has long espoused taking a strong stance on public security in Brazil, which according to United Nations statistics has more homicides than any other country. Many Brazilians live in daily fear of muggings or burglaries. ]

He himself was stabbed at a rally last month and will need to undergo surgery in mid-December to remove a colostomy bag, the head of his right-wing Social Liberal Party Gustavo Bebianno told reporters. [Mr. Bolsonaro spent three weeks recovering from surgery following the stabbing on the campaign trail by a man police described as a deranged leftist.]

Bolsonaro said he would “unite Brazil” by cutting bureaucracy and red tape for businesses. He said he was committed to fiscal discipline and called for the early elimination of the federal government’s budget deficit.

“We are going to think in terms of more Brazil and less Brasilia,” he said, referring to the nation’s capital where he will take office on Jan. 1.

Financial markets are expected to rally on Monday on Bolsonaro’s victory. The real currency has gained about 10 percent against the dollar in the last month as Bolsonaro’s prospects of winning increased. Sao Paulo’s benchmark Bovespa stock index has risen 13.5 percent since mid-September.

Investors are particularly heartened by his choice of Paulo Guedes, a Chicago University-trained economist and investment banker, as his economic guru and future economy minister.

Bolsonaro’s rise follows conservative electoral victories in Argentina, Chile, Colombia, Paraguay, and Peru, pushing the continent to the right and undermining support for the authoritarian socialist regime in Venezuela. …

Published at Reuters on October 28. Reprinted here for educational purposes only. May not be reproduced on other websites without permission from Thomson Reuters.

1. For BRAZIL, give the following information:

2. For BRAZIL:
a) list the who, what, where and when of the news item
b) Why did Mr. Bolsonaro say he wants to change the country’s direction?
c) What was the final outcome of the election?
d) How did president-elect Bolsonaro say he will govern the country?
e) Mr. Bolsonaro says he is committed to fiscal discipline. What steps will his economics minister Paulo Guedes take to implement this idea?

CHALLENGE: Follow news from Brazil after Mr. Bolsonaro is inaugurated. Most media outlets portray his election as something bad and/or dangerous for democracy in Brazil. Most headlines portray his victory in a negative manner, using the term “far-right” vs. his opponent as just “left-wing”:

Does the media’s opinion of Bolsonaro, who was elected by a 55% majority, hold true in his first months in office?