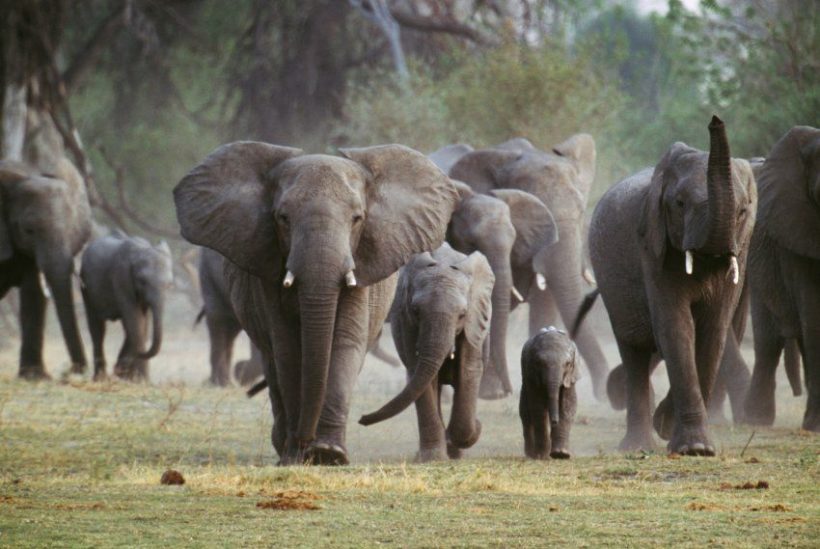 After months of public meetings and consultations, the recommendation to lift the ban was made Thursday by a committee of cabinet ministers, who also suggested the “establishment of elephant meat canning” for pet food, the BBC reported. [The UK Telegraph reported that the committee’s report says hunting would boost tourism while managing the national elephant population. It also called for “regular but limited” elephant culling. It suggested meat from culled animals could be canned for pet food.]

“We recommend … a legal framework that will enable the growth of a safari hunting industry and manage the country’s elephant population within the historic range,” said Frans Van Der Westhuizen, who chaired the committee.

The number of elephants in Botswana is estimated to be about 130,000 — a third of the continent’s total — which some claim is overloading the ecosystem, creating conflict between wildlife and the country’s 2.3 million people.

Botswana’s president, Mokgweetsi Masisi, tasked a government subcommittee with reviewing the 2014 ban against hunting large mammals on public land when he took office last year. (Former President Ian Khama had directed that the hunting ban be put in place during his term. The government said then it was spurred to act after seeing indications “that several species in the country are showing declines.” The ban did not affect hunting in registered and private game ranches, where it is strictly regulated under the Wildlife Conservation and National Parks Act.) Botswana’s president, Mokgweetsi Masisi (right), tasked a government subcommittee with reviewing the 2014 ban against hunting large mammals on public land when he took office last year. Former President Ian Khama (left) had directed that the hunting ban be put in place during his term.

The ministers decided Thursday to recommend lifting the hunting ban, the nation’s government announced in a Facebook post. It also advised compensating for damage caused by wildlife and opening the door for elephant meat to be used in canned pet food.

The decision on lifting the ban now rests with President Masisi, who is reviewing the ministers’ recommendations.

“I can promise you and the nation that we will consider it. A white paper will follow and it will be shared with the public,” President Mokgweetsi Masisi said.

“If need be, we will give an opportunity to parliament to also interrogate it and allow them space to intervene, before we make a final determination,” The East African reported President Masisi said Thursday after receiving the report.

Member of Parliament Konstantinos Markus, who has spearheaded the effort to lift the ban, has argued the “expansion of the elephant population in Botswana has impoverished communities.”

Markus told Reuters in July that rural citizens have grown hostile toward the elephants especially in the north where he said the crop-devouring animals have slashed maize yields by nearly three-quarters.

“Communities have become very hostile and negative towards wildlife,” Mr. Markus said. “This harvest loss leaves the community with fewer options to take care of their households while perceptions of local communities towards wildlife conservation have changed since the hunting ban,” he told Reuters.

Kenya has had a decades-long ban on sport hunting but other African nations such as Tanzania, Zambia and South Africa have hunting industries which they say generate tens of millions of dollars in revenue.

Poor rural Africans who live in close proximity to large, dangerous animals often have far dimmer views of such wildlife than North Americans or Europeans far removed from the threats they pose.

Compiled from articles by Sommer Brokaw, UPI, and Alastair Leithead, BBC News on Feb. 23 and by Natalie Musumeci, NYPost and WAMU on Feb. 22 and Reuters on July 15, 2018.  Reprinted here for educational purposes only.

1. For BOTSWANA, give the following information:

2. For BOTSWANA:
a) list the who, what, where and when of the news item
b) What did the committee suggest doing with the elephant meat?
c) What is the government still considering before the ban on hunting elephants in Botswana would be lifted?
d) How is the ban on hunting elephants on public land hurting people in rural areas?
e) Botswana has a Wildlife Conservation and National Parks Act that protects its wildlife. It appears that lifting this ban would have a positive impact on the communities that are negatively impacted by the elephants, while still protecting elephants. What do you think? Explain your answer.

Shortly after coming into office in April 2018, President Mokgweetsi Masisi asked ministers to review the hunting ban which was implemented by his predecessor Ian Khama in 2014.

Public meetings were held and organizations, communities and individuals were asked to comment.

The report’s findings recommend that:

What is the reaction to lifting the hunting ban?

Those previously employed by hunting safari companies lost their jobs and say they would welcome the change.

Hunting can be used as a conservation tool, by utilizing wilderness that is not suitable for the high-end photographic safaris that Botswana is famous for.

But many conservationists are against the idea of culling elephants or hunting them and warn there may be a backlash from international tourists.

With an election due in October, the government has to balance lifting the hunting ban to win rural votes, against the impact it may have on Botswana’s international reputation as a luxury safari destination. (from BBC News, Feb. 22)