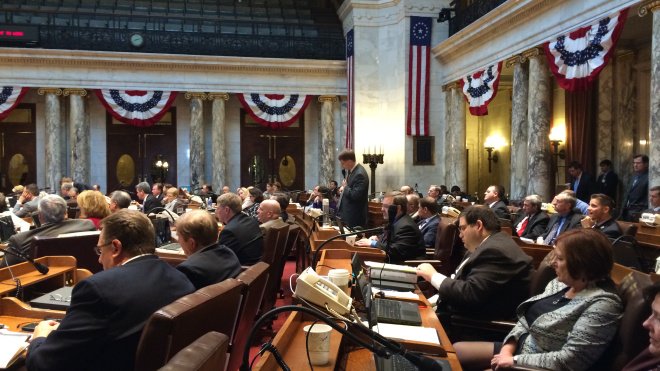 (Associated Press) MADISON, Wis.—Wisconsin lawmakers voted Friday to make their state the 25th to enact right-to-work legislation, pushing a fast-tracked bill through the Assembly after an overnight debate and sending it on to Gov. Scott Walker for his promised signature.

The Republican governor, a likely 2016 presidential candidate who rose to national prominence by taking on public-sector unions four years ago*, plans to sign it Monday. The Wisconsin legislation is aimed at private-sector workers.

The Assembly passed the bill 62-35 after a marathon session that included about 20 hours of debate. It was a straight party-line vote, with no Democrats backing the measure. …

Union protests against the right to work bill weren’t nearly as large as four years ago, growing only as large as about 3,000 people, compared with 100,000 in 2011.

Democrats accused Republicans of pressing the issue to help Mr. Walker’s likely presidential campaign. “It’s the workers in this state that are suffering through the politics of our governor’s ambitions,” said Democratic Rep. Cory Mason, of Racine.

Rep. LaTonya Johnson, a Democrat from Milwaukee, and a member of AFSCME, said she cares about people more than freedom. “It just angers me to know that we come here and we pass bills that affect people’s everyday lives, and we don’t have a clue as to how those everyday people live or how they survive,” she said.

Republican Assembly Speaker Robin Vos accused Democrats of having “Walker derangement syndrome,” and said the bill was about giving workers the freedom to choose whether to pay union dues.

Republican Rep. Jeremy Thiesfeldt, of Fond du Lac said, “I’m not going to apologize about using the word freedom. I’m going to use it over and over again because that’s what this is about.”

Supporters argued it would make Wisconsin more attractive to businesses looking to move in or expand. But opponents said the goal is to destroy unions, which tend to vote Democrat, and a right-to-work law would depress wage and create more dangerous workplaces, in turn hurting the economy.

Twenty-four other states have right-to-work laws. Michigan and Indiana were the two most recent states to enact it, both in 2012. Minutes after debate began in the Wisconsin Assembly on Thursday, protesters in the chamber’s gallery interrupted Mr. Vos, shouting “Right-to-work is wrong for Wisconsin!” Mr. Vos ordered the galleries cleared, leading to lawmakers debating in a chamber with no spectators.

Excerpted from an Associated Press report published at The Wall Street Journal.  Reprinted here for educational purposes only. May not be reproduced on other websites without permission from the AP.

1. Define the following terms, most of which are used in the article:

3. How did the Wisconsin Assembly vote on the bill?

4. How many protesters gathered to oppose the passage of the legislation (compared to 2011 when Governor Walker ended collective bargaining for public sector unions)?

5. Which two states were the most recent to pass right-to-work laws before Wisconsin?

CHALLENGE QUESTIONS: In a Gallup poll (gallup.com) from August 2014, 71% of Americans say they would vote in favor of a right-to-work law.