Why self-driving Ubers are rolling around Pittsburgh 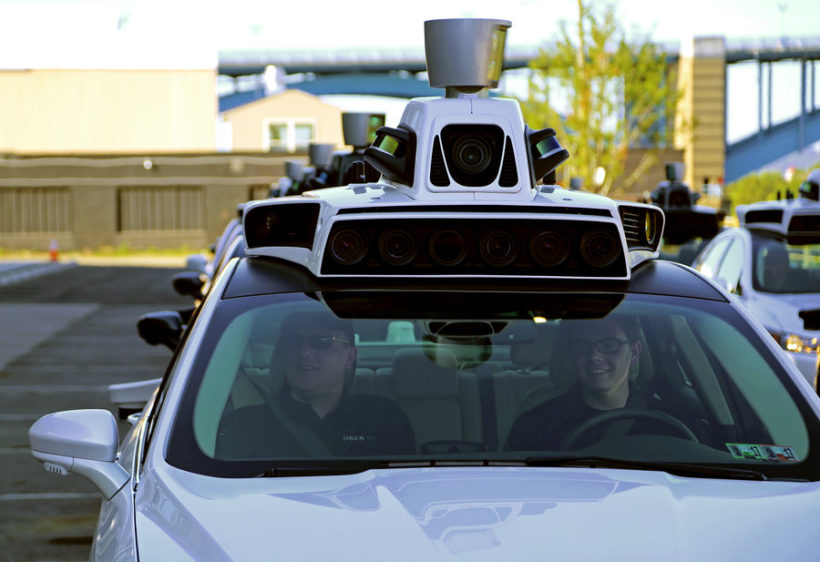 (by Nathan Bomey, USA Today) PITTSBURGH — …Uber’s partially self-driving car began accepting passengers here Wednesday, a critical test for the ride-hailing service as it seeks to develop a fleet of  autonomous vehicles that could someday ferry passengers around crowded cities.

The company on Tuesday gave journalists test drives in about two dozen Ford Fusion sedans that engineers bought off dealership lots and retrofitted with light-mapping systems, radar, sensors and cameras. For now, [an] Uber employee stays behind the steering wheel to intercede if the car’s self-driving system makes a mistake.

“I really believe that the most important thing that computers are going to do in the next 10 years is drive cars,” said Anthony Levandowski, leader of Uber’s self-driving car effort.

Specially trained Uber employees will pick up Pittsburgh passengers who agree to the possibility that they could be randomly assigned a self-driving car when they request an UberX ride through the app. Rides will be free for now. [Uber, currently valued at $68 billion, plans ultimately to replace many of its 1.5 million drivers with autonomous vehicles.]

In a USA TODAY test drive, the Fusion smoothly navigated many of the bustling urban streets of Pittsburgh, breezing over the Three Sisters bridges above the Allegheny River and safely avoiding bicyclists and walkers on vibrant Penn Avenue. On several occasions, the car handed control back to the driver when a situation was too complex for the car’s algorithms, such as when a construction vehicle was parked backward in the right lane.

Operators are instructed to loosely grip the steering wheel at all times and must be ready to take over immediately at any time, with beeps and color indicators on the dashboard providing notice. A touch-screen in the backseat shows ride info to passengers.

Pittsburgh is home to Uber’s new Advanced Technologies Center, which is staffed by many former Carnegie Mellon University researchers whom Uber recruited. But it’s also a good town to test self-driving cars, with its combination of bridges, pedestrians, bicyclists, urban driving, railroads and bad weather, which has [caused trouble for] self-driving vehicles. [Per Reuters, the city is full of steep and narrow streets, potholes, tunnels and more than 440 bridges. It has snow and ice in the winter, blossoming trees that can hide street signs and traffic signals in the spring, blinding sun in the summer and a slippery ground cover of fallen leaves in the autumn.]

“We like to call Pittsburgh the double-black-diamond of driving,” said Raffi Krikorian, leader of Uber’s Advanced Technologies Center, using a term for an extremely difficult ski slope.

“If we really can master driving in Pittsburgh, then we feel strongly that we have a good chance of mastering it in most other cities around the world.”

In recent weeks, the road to self-driving cars has developed potholes.

According to recent reports, Google’s self-driving car project is losing ground to rivals, and Apple is recalibrating its secret car project and conducting layoffs. Meanwhile, Tesla Motors is introducing an upgraded Autopilot software system after a deadly crash raised questions about the company’s self-driving strategy. All the major automakers are proceeding with various versions of autonomy.

The biggest hurdle to achieving total autonomy: handling a small percentage of scenarios that a human understands and a car does not. What’s more, with little infrastructure installed to foster communication between vehicles and road infrastructure, most cars are unaware of each other on the roadway.

“The idea of self-driving needs to be heavily put in quotation marks,” Rawley said. “Nevertheless I think it is a pretty impressive technological breakthrough” for Uber.

[Industry executives remain sharply divided on the timeline, with some expecting fully autonomous cars within five years and others predicting they are still decades away.].

Reprinted here for educational purposes only. May not be reproduced on other websites without permission from USA Today.

2. a) Define retrofitted.
b) How did Uber engineers retrofit the cars they bought to test their self-driving cars?

4. a) What was Uber’s self-driving car able to do when the USA Today reporter took a test drive?
b) Define algorithm.
c) What happened when a situation was too complex for the car’s algorithms?

5. Why is Pittsburgh a good city to test drive self-driving cars?

6. a) Define autonomy in relation to vehicles.
b) What is the biggest hurdle to achieving total autonomy?

7. List at least 3 positives and 3 negatives of self-driving cars.

8. Ask a parent: do you think self-driving cars are good for cities/towns? Why or why not?

More on the Uber self-driving cars from a Reuters news report:

Uber’s Pittsburgh fleet consists of Ford Fusion cars outfitted with 3D cameras, global positioning systems and a technology called lidar that uses lasers to assess the shape and distance of objects, mounted somewhat crudely to the vehicle’s roof. The company is also outfitting Volvo SUVs that will be added to the fleet.

While autonomous driving on highways is relatively easy — Carnegie Mellon researchers built a minivan that in 1995 drove itself across the country and remained in autonomous mode about 98 percent of the time — city streets, with their traffic, pedestrians, potholes and construction, are a different matter.

“Since the mid-90s pretty much this entire field has been focused on doing that last step,” said Aaron Steinfeld, associate research professor at the Robotics Institute at Carnegie Mellon.

Pittsburgh also offers Uber a welcoming mayor and city leadership, who have rolled out the red carpet for Uber and a state law that allows for autonomous cars, as long as someone is behind the wheel to take over if needed.

Among the residents, there are mixed responses. On the ride-along, some stared at the autonomous car with mouth-gaping awe; another gave the car the middle finger.

Others, like Robert Armitage, 55 and a lifelong resident of Pittsburgh, are excited for his city but skeptical of Uber’s ambitions.

“I am absolutely skeptical as to whether they can pull it off in the winter,” he said. “Pittsburgh is awfully far north for this kind of experiment.”

Watch a report from Wired: