When Horses and Freedom of Religion Collide 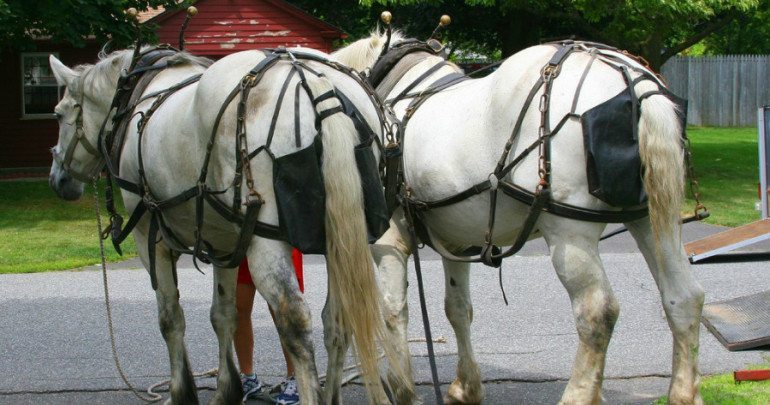 (by Nicole Hong, The Wall Street Journal) – Horse diapers have been thrust into the debate over religious freedom. The ordinance, passed in 2014, broadened an existing law mandating the removal of dog waste in public places. The new law, which the city said was spurred by complaints from neighbors about horse manure, requires a “properly fitted collection device” to be placed on all horses walking on the street.

Residents of Auburn say the issue has divided the town of about 1,300 for years. Members of the town’s Amish community have refused to comply with the ordinance, saying equine diapers violate the community’s religious standards. That stance has landed many of them in court, or worse.

Last year, after a jury found Dan Mast guilty of violating the ordinance, he refused to pay the $193 fine and spent 10 days in jail. Last month, Mr. Mast, 27 years old, and another Amish plaintiff filed a lawsuit against the city of Auburn, its mayor and police chief in which they argue the law is intended to prosecute the Amish based on their religious beliefs.

As of October, the city of Auburn had more than 25 pending cases against Amish men who failed to attach diapers to their horses, according to the suit.

The plaintiffs are members of the Old Order Swartzentruber Amish religion, one of the most conservative Amish orders. They believe in shunning things that are “of the world,” the lawsuit said, including technology that some Amish groups accept, like fax machines, LED lights and gas-powered refrigerators. Before the ordinance passed in 2014, the community elders decided the equine diapers wouldn’t be permitted by the Swartzentruber church.

A lawyer for the defendants, W. Currie Milliken, said the issue has been blown out of proportion, and the city wants to preserve its friendly relationship with the Amish.

“The city ordinance does not target any individuals based on his or her religious views,” Mr. Milliken said. “This is just a health and safety issue that needed to be addressed.”

Dan Canon, a civil rights lawyer representing the plaintiffs, said the law is singling out the Amish, pointing to a section of the ordinance that allows horses to walk without diapers during special events such as parades.

The lawsuit is part of a long line of religious freedom skirmishes between the government and the Amish, a Christian church with more than 300,000 members in the U.S. The equine diaper issue has also come up in Wisconsin, southern Indiana and upstate New York. Many disputes in recent years have centered around whether Amish homes must adhere to building codes, including the installation of smoke detectors.

The Amish have approximately 2,300 local congregations in the U.S., and each one has its own rules for how it interacts with technology and the outside world. …

The Swartzentruber Amish, who moved to Auburn about a decade ago, say a less restrictive solution is for the city to require people to clean up after their horses without mandating the attachment of a diaper. The Amish currently carry shovels for waste removal and dispute the city’s claim that the horse manure poses a threat to public health, according to the lawsuit.

City officials have said the 2014 ordinance was necessary after previous attempts to negotiate with the Amish failed. Mr. Milliken, the city’s lawyer, said shoveling is an inadequate solution because it can be dangerous for the Amish to stop in the middle of a highway and scoop up horse manure.

Donnalyn Alford, who works at a furniture store in Auburn and has lived in the area since 1978, said she has mixed feelings on the issue. The Amish should make more of an effort to clean up after their horses, while the city should also stop “picking on these people,” she said.

“Yes, it’s a law, and we’re all supposed to follow the law,” Ms. Alford said. “But I don’t understand why they can’t find a happy medium. All of this over horse poop?”

2. Describe the 2014 ordinance at the center of the debate.

3. Why have some Amish residents filed a lawsuit against the city, its mayor and police chief?

4. How is the city responding to the lawsuit?

5. On what ground is the plaintiff’s attorney arguing the case?

6. a) How would the Amish residents like the dispute to be resolved?
b) Why is the city opposed to this solution?

7. Donald Kraybill, an Amish studies expert at Elizabethtown College said, “The state has an interest in protecting health. That needs to be balanced against this particular group’s freedom to practice their religion without interference from the government.”
a) Who is being unreasonable: the city or the Amish? Explain your answer.
b) What do you think: is the religious freedom of the plaintiffs being violated by this ordinance? Explain your answer. (Is it a health and safety issue? Is is religious discrimination?)
c) What reasonable accommodation could/should each/either side make?

Due partly to large family sizes, the Amish population is doubling every 20 years, making it likely such clashes over modern government regulations will continue, legal experts say. Most Amish groups reject the use of televisions, computers, motor vehicles and electricity from public utilities, according to experts in Amish studies.

In Kentucky, a similar battle erupted around 2008 over the Amish’s refusal to affix orange-safety triangles to the back of their buggies. The Kentucky Supreme Court in 2012 ruled against the Amish. The following year, the state passed the Religious Freedom Restoration Act, which says the government can’t burden religious freedom unless there is a compelling interest and unless the government is using the least restrictive means to further that interest.