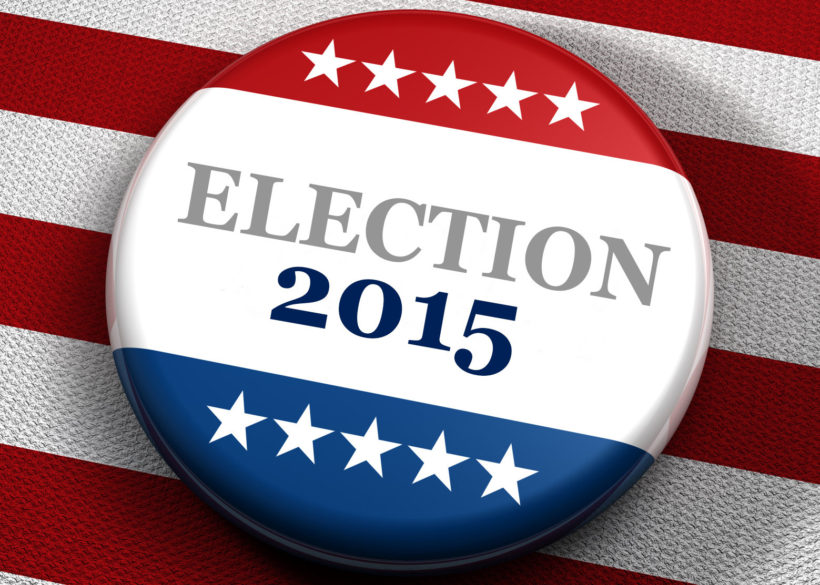 (by Jacob Gershman and Mark Peters, The Wall Street Journal) – Voters across the country are considering ballot measures on Tuesday on a range of contentious issues from tax hikes and hunting rights, to minimum wage increases, campaign finance and marijuana legalization.

In Mississippi, voters are deciding on a constitutional amendment opposed by Republican leaders that would allow residents to sue over school-spending shortfalls and give courts more say over public education funding.

A municipal ballot measure in Tacoma Wash., would raise the minimum wage for most businesses in the city to $15 an hour, one of the highest in the nation. The current rate is $9.47. Unlike the $15 wage approved by Seattle last year, which is fully phased in by 2017, Tacoma’s wage hike would take effect immediately under a voter initiative. Another competing measure would gradually raise the wage floor to $12 an hour by January 2018. Both would authorize inflation adjustments.

The city of Fircrest in Pierce County, the last “dry” municipality in Washington, is voting on whether to repeal a Prohibition-era law restricting food-and-drink establishments from serving alcoholic beverages for on-premise consumption.

Voters in Maine are deciding whether to expand the state’s public campaign-financing system by requiring the state to put an additional $1 million into a fund for participating state candidates and pay for the increase by eliminating corporate tax breaks. The so-called “Clean Elections” initiative would also increase penalties for campaign-finance violations. The idea, whose supporters say would create a fairer electoral process, was denounced by the state’s Republican governor, Paul LePage,who has called taxpayer-funded political campaigns “welfare for politicians” and a “scam.”

In Texas, a proposal to enshrine the right to hunt in the state constitution will go before voters. Proponents say it would protect the hunting industry from restrictions on when and what they can hunt, while others have questioned why hunting warrants such special constitutional recognition.

Another measure before Texas voters would repeal a requirement that statewide-elected officials reside in the state capital of Austin.

Ohio voters are weighing a marijuana legalization initiative. If it passes, the state would be the fifth and largest state by population to legalize recreational marijuana and the first state to do so without previously legalizing medical marijuana. The other states where pot is legal are Colorado, Washington, Oregon and Alaska, along with the District of Columbia.

Ohio’s proposal is controversial even among supporters of marijuana legalization because of how it lets a select few cultivators control the market in the state. Recent polls show enough support for the measure to pass, although the vote is likely to be close. A Kent State University survey released last month showed 56% of Ohio voters polled support the amendment.

Supporters collected hundreds of thousands of signature to force the statewide vote. They argue marijuana laws are a waste of money and lead to unnecessary penalties, from jail time to the loss of professional licenses. Legalization could also bring in hundreds of millions of dollars in new state tax revenue, they say.

[The ironically named] “ResponsibleOhio,” which is spearheading the effort to legalize the drug, expects to spend more than $20 million on its campaign, including gathering signatures, television advertisements and a mascot named “Buddie” whose head is a marijuana plant bud. It’s backed by investors in companies that would receive the first commercial licenses to grow the drug in Ohio.

Elected officials including Gov. John Kasich and groups from the Ohio Chamber of Commerce to the National Association for the Advancement of Colored People (NAACP) are lining up against the measure. [The Ohio Conference NAACP president said last week that legalization would represent “tacit approval” of a drug with potentially far-reaching negative effects on families and children.]

“Sending mixed signals to kids about drugs is a disaster,” said Mr. Kasich, who is running for the Republican presidential nomination, during a debate last week among candidates.

Further complicating the issue is a decision by state lawmakers to put an additional constitutional amendment on Tuesday’s ballot preventing the establishment of monopolies through the statewide ballot process. Although that measure has been discussed in recent years, lawmakers worked to ensure it was on the ballot in time for the marijuana vote.

Since the marijuana measure gives a select group of landowners the exclusive right to grow the drug, passage of the antimonopoly amendment could derail it. So if both measures pass Tuesday, a legal battle is expected.

1. a) What is a ballot measure?
b) What is the difference between an initiative and a referendum?

2. In how many states were there state-level ballot propositions on the ballot this year?

3. List the types of questions asked in this year’s ballot measures as mentioned in the article. Be specific.

4. a) Why is Ohio’s proposal to legalize marijuana controversial among supporters?
b) In addition to people who use marijuana, who backs the proposed law?
c) Who opposes the passage of this proposed legislation?
d) How might the marijuana proposal be derailed even if it passes?

5. Visit the StudentNewsDaily “Election Resources” page at: studentnewsdaily.com/election-resources-for-teachers and find the link for “State Election Websites” and go to Ballotpedia at: ballotpedia.org/Main_Page.
a) List the national and state races, as well as the ballot measures for your state.
b) Discuss with a parent how he/she is voting in your state’s elections and to explain his/her choices.
NOTE: Many people prefer to keep their voting choices private. This answer is not for class discussion.

Four propositions are initiatives, citizen-initiated proposals to create new laws. Initiatives are usually the most far-reaching proposals and attract the lion’s share of attention. Twenty-two propositions were legislative propositions, statutes or amendments placed on the ballot by the legislature. Four advisory measures were required by constitutional provisions.

For additional information on ballot measures see ballotpedia.org and/or the National Conference of State Legislatures website

Read an explanation of ballot measures (initiatives and referendums) at the Initiative and Referendum website iandrinstitute.org.

View a map that shows what type (if any) of ballot measures your states allows at: