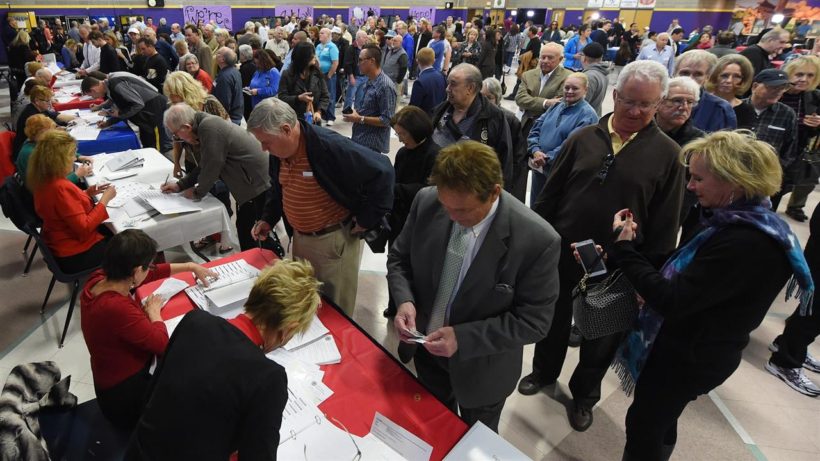 (by Emily Schultheis, CBS News) — After the first four voting contests of 2016, a clear trend is showing up in the numbers: compared with 2008, Democratic turnout is down, while Republicans are hitting record turnout highs.

Just a week earlier, when Republicans in South Carolina went to the polls, a whopping 738,000 turned out, over 20 percent more than the 603,000 Republicans who voted in 2012 in the GOP’s last contested primary.

Strong turnout is typically a sign of how enthusiastic and engaged a party’s voters are, a point Republicans are driving home as they tout the GOP’s record turnout. And generally, a party’s primary or caucus turnout is higher when its voters are engaged in the process and the race is competitive–both of which are true on the Republican side.  …..

Democrats have a contested primary, too, but with just two candidates–and despite Sanders’s victory in New Hampshire, his candidacy hasn’t been able to bring in the kind of new, first-time voters that then-Sen. Barack Obama’s did in 2008.

Still, lower Democratic turnout doesn’t necessarily mean the party’s voters aren’t paying attention, or that they won’t show up in November. On the Democratic side, 2008 was a historic election–and Democratic Party officials say it was always unlikely they’d be able to match it again, even with a contested primary between Clinton and Sanders.  .….

Ultimately, turnout levels going forward depend in large part on whether the nomination battles continue until the last states vote in June. If Clinton or Trump were to wrap up the nomination in mid-March, for example, their party’s turnout numbers might see a lag once the race gets to April and May. …

…Young voters…turnout rates have remained relatively stable among Democrats but surged for Republicans. “We don’t know how long the competition is going to last … that’s a really important factor we’re going to have to watch,” said Abby Kiesa of the Center for Information & Research on Civic Learning and Engagement, a group that tracks trends relating to young voters. “In 2008, at least on the Democratic side side, the competition went on for very long, and provided the opportunity for more young people to be outreached to. That could have contributed to the increased turnout in 2008.”

At least thus far, the high Republican turnout has most helped Trump’s campaign, likely a sign he is bringing new people into the fold for the party. (Trump acknowledged this in a tweet Sunday: “While Hillary and I both won South Carolina by big margins, Repubs [sic] got far more votes with a massive increase from past cycles. GROWING PARTY,” he said.)

For Democrats, low turnout has hurt Sanders’s campaign–a fact he acknowledged after the Nevada caucuses. Like Obama, he needs to grow the electorate and bring in new people in order to be successful, and it’s unclear whether he’ll be able to do that going forward.

It’s hard to predict what relationship primary turnout has, if any, to who shows up to the polls in November. Primaries often draw people who feel strongly about a particular candidate or who are more engaged in politics–and not everyone who votes in the general election is ready and paying attention this early in the process. …

1. List the voter turnout (and by what percentage it has changed) for each party in the early primary states:
a) Iowa
b) New Hampshire
c) South Carolina
d) Nevada

2. What trend is clear from these turnouts?

3. What is significant for Republican voter turnout in Nevada?

4. What is strong voter turnout in primary elections a sign of?

5. a) Define contested primary.
b) If the president is not running again, the party generally will support the vice president’s nomination if he runs. Vice President Joe Biden has declined to run.
Gallup reported in 2014 that young adults (those between the ages of 18 and 29) have typically aligned themselves with the Democratic Party, but they have become substantially more likely to do so since 2006.
Consider the fact that the Republican party had several candidates in their 40’s, a woman, an African American and two Latino candidates.
Bernie Sanders is 74. Why do you think no younger Democrats entered the race against Hillary Clinton (except Maryland Gov. Martin O’Malley, who never received any substantial support)?

6. Michael McDonald, an expert on voter turnout at the University of Florida who tracks turnout said of the low voter turnout thus far in the Democratic primaries:
“It would be unusual for the turnout rate to be as high as it was for the Democrats in 2008. The fact that the turnout is lower than the 2008 level is not something that’s a huge surprise to me.”
If elected, Hillary Clinton would be the first woman president. Many Democratic women say they are voting for her for that fact. Do you think the possibility of electing the first female president should have resulted in higher voter turnout or do you agree with Mr. McDonald? Explain your answer.

8. To what do you attribute the record increases in voter turnout for the Republican primaries? (CHALLENGE: Check out voter turnout numbers for the Super Tuesday states and then those in the coming months – do the statistics hold steady?)

9. Do you think the large number of Republican candidates hurt the party’s nomination process? Explain your answer.