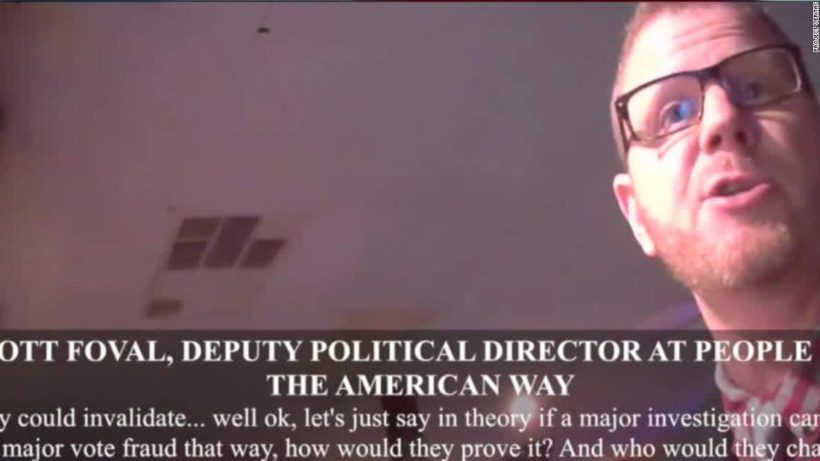 Foval was laid off on Monday by Americans United for Change, where he had been national field director. Creamer announced Tuesday night that he was “stepping back” from the work he was doing for the unified Democratic campaign for Hillary Clinton.

The moves came after…O’Keefe’s video series “Rigging the Election” [was run on conservative websites and social media but completely ignored by the mainstream media]. In them, Foval is filmed telling hidden-camera toting journalists about how they’ve disrupted Republican events; Foval also goes on at length about how an organization might cover up in-person voter fraud. In another Tuesday night statement, the Creamer-founded Democracy Partners, which used Foval as a contractor, denounced both Project Veritas and the statements caught on camera.

“Our firm has recently been the victim of a well-funded, systematic spy operation that is the modern day equivalent of the Watergate burglars,” said the firm. “The plot involved the use of trained operatives using false identifications, disguises and elaborate false covers to infiltrate our firm and others, in order to steal campaign plans, and goad unsuspecting individuals into making careless statements on hidden cameras. One of those individuals was a temporary regional subcontractor who was goaded into statements that do not reflect our values.”  …..

[The media has questioned some of Project Veritas’ previous undercover investigations.] The result…was that the “Rigging the Election” videos got a skeptical reception [and were completely ignored by the media, despite trending on YouTube] — at first. But the video of Foval, a Wisconsin-based politico with a long resume, had him bragging about a litany [long list] of political dirty tricks [unethical or illegal campaign practices or pranks intended to disrupt or sabotage the campaigns of opposing candidates]. In the first video, he boasts of “conflict engagement in the lines of Trump rallies,” takes credit for the violence that canceled a Trump rally at the University of Illinois in Chicago, admits he’s paid “mentally ill” people to start trouble, and says there’s a “Pony Express” that keeps Democratic operatives in touch, regardless of whether they work for super PACs or the campaigns not permitted to coordinate with super PACs.

In the second video, Foval spends five minutes discussing how voters might be brought from outside Wisconsin to commit voter fraud, buying cars with Wisconsin plates to avoid looking suspicious. “We’ve been bussing people in to deal with you (expletive) for fifty years and we’re not going to stop now,” he says.

Since the video’s release, Foval has responded to media requests by saying the video did not deserve attention from “legitimate news organizations.” A call to Creamer on Tuesday night went to voicemail. But while neither man is defending the content of the videos, the editing raises questions about what was said and what may come out later.

Foval, who repeatedly ties a noose with his tongue, also seems to overhype his successes. Reporters who covered the Trump University of Illinois appearance in Chicago found that students, not Americans United for Change, were responsible for the shut down of the Trump rally; the video’s evidence to the contrary is that Zulema Rodriguez, an activist paid in February by the DNC, says on tape that she was there and “did that.” In the first video, O’Keefe makes much of the term “bird-dogging,” which Foval describes as putting people at the front of rope lines to make sure “they’re the ones asking questions.”

“It’s a word we had not heard until we began this investigation,” O’Keefe says, noting that the term appears in WikiLeaks e-mails that include Clinton staffers.

But [according to the reporter who wrote this article] it’s not a new term, and certainly not secret. Bird-dogging is a fairly common activist tactic, and reporters often recognize it when seemingly “perfect” questions come from a political audience. In August 2015, Foval told the Milwaukee Journal-Sentinel that [left-wing activist group] People for the American Way, his employer at the time, was “bird-dogging all of” the Republican presidential candidates. What was seen as a nuisance political tactic then becomes, in the video sting, a secretive form of voter/candidate intimidation.

In the voter fraud video, Foval looks — somehow — even worse, describing how voters could be sent to midwestern states to cast fraudulent ballots. … Foval says that “Bob Creamer comes up with a lot of these ideas,” but what the “ideas” are is lost to a quick edit. After a quick introduction of Creamer that covers his 2005 conviction for tax evasion, Creamer is seen talking to a journalist posing as a possible donor, rambling a bit as he describes how to get voter IDs to people who need them.

“What do you really need, okay?” says the journalist [posing as a Democratic donor]. “What makes you a citizen? And if you look at that checklist, it’s an ID card of any kind that shows you who you are and a pay stub that shows you’re getting paid at a local address some place.”

“To get registered, you mean?” asks Creamer.

“Yeah,” says the journalist. “Let’s say I had business inside of, say, Illinois or Michigan, and I hired people, and I had addresses for them, I could write them checks, I could use them as day laborers or whatever and use them and find my way around the voter registration law for Hispanics.”

Creamer quickly begins jotting down names of voter registration groups: “There are a couple of different organizations, that’s their big trick.” But while the implication is that the journalist is pitching mass voter fraud, he never says as much, and Creamer never agrees to it. In another tape, filmed at a restaurant, Creamer hears another version of the pitch and says “my fear is that someone would decide that this is a big voter fraud scheme.”  …..

“The reporting process and methods of Project Veritas Action are proven successful and effective and are the protected intellectual property and trade secrets of Project Veritas Action,” said Steve Gordon, a spokesman for the PVAction Fund. “This policy is in accordance with the practices of news organizations globally and is generally accepted as the professional norm.”

…Foval’s sacking and Creamer’s “stepping back” have already given the Trump campaign the confidence to run with these stories. On Tuesday night’s episode of “Hannity” on Fox News, two campaign representatives said that the PVAction tapes validated everything Trump had said about the possible threat of election theft, and called for a hasty FBI investigation into anyone connected to Robert Creamer.

Creamer is the husband of Rep. Jan Schakowsky, D-Ill. In 2006, he was sentenced to five months in federal prison for bank fraud and a tax violation.

Creamer was convicted in a check-kiting scheme to keep afloat an Illinois consumer group he had led. A federal prosecutor [charged that] Creamer stole money from banks in the form of unintended, interest-free loans.

“Once again, Donald Trump was ahead of his time,” said Trump campaign manager Kellyanne Conway. “We see that it goes right to the top.”

“The FBI should be opening an investigation into these people right now,” said Trump ally and former Speaker of the House Newt Gingrich.

David Weigel is a national political correspondent covering the 2016 election and ideological movements.

Reprinted here for educational purposes only. May not be reproduced on other websites without permission from WashingtonPost .com.

2. Who are Robert Creamer and Scott Foval? Be specific. (Also, list the positions each held in Democratic politics)

3. Describe the revelations Creamer and Foval each made to undercover journalists from Project Veritas. (List the specific activities they mention.)

4. a) In response to the release of the videos, what did Democracy Partners accuse Project Veritas of doing?
b) Do you think if the Project Veritas reporters had identified themselves and explained what they were investiging, Creamer and Foval would have given them the information they were asking about? Explain your answer.

5. How did Foval and Creamer respond to the videos’ release?

6. Watch the video. How does Mr. Foval explain/describe “birddogging”?

7. Both men were fired or “stepped back” from the organizations they were with. The Washington Post reporter writes, “while neither man is defending the content of the videos, the editing raises questions about what was said and what may come out later.”

Paul Farhi writes in an October 19 Washington Post commentary “Is it okay for James O’Keefe’s ‘investigative reporting’ to rely on deception?” the following:

The techniques employed by O’Keefe and his associates, they say, fall far outside journalistic norms. Mainstream news organizations discourage the methods that he regularly employs to expose questionable practices, usually by liberals or Democrats.

Among the more problematic is Project Veritas’s associates’ use of aliases and false identities to gain access to the people it stings. The organization acknowledges that its people posed as political donors to trick the two Democratic operatives into speaking with them…

Although variations on such tactics have been employed by news organizations on rare occasions… such deceptions are generally discouraged as a violation of trust between source and reporter.

Andrew Seaman, the chair of the Society of Professional Journalists’ ethics committee, calls O’Keefe “an advocate who uses some of the more controversial items in journalism’s toolbox.”

The Society of Professional Journalist’s ethics code doesn’t forbid undercover reporting, he notes. But it stresses that the methods O’Keefe regularly uses should be a last resort in pursuit of information that is “vital” to the public.

Readers responding to Mr. Farhi’s commentary overwhelmingly disagreed. Read some of the reader comments below:

a) What do you think of the assertions made by each reader reacting to the Washington Post commentary? Do they make valid points? Explain your answers.

b) Do conservatives make a legitimate point in asserting that the media would be widely reporting on the videos exposing wrongdoing by political activists if the activists had been Republicans? Explain your answer.