Vermont legislature on track to be first in U.S. to legalize marijuana 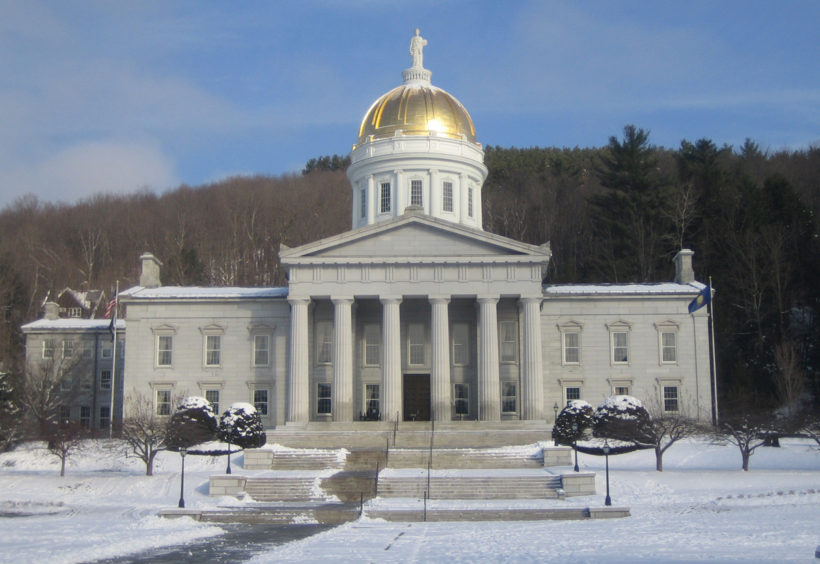 (by Scott Malone, Reuters)  Montpelier, Vt. — Liberal-leaning Vermont could become the first U.S. state to legalize recreational marijuana use through legislation, rather than by voter initiative, in a move that advocates for the drug say could speed its acceptance across the nation.

State representatives this month are set to take up a bill passed by the Democratic-controlled state Senate in February that would allow adults over 21 to purchase and smoke the drug beginning in 2018.

The move follows a year of hearings in the Senate that lawmakers say allowed them to closely consider appropriate limits to place on the drug’s use. The current proposal would prohibit users from growing plants at home and ban the sale of edible products containing marijuana extracts.

But lawmakers must act before the end of May, when the current session ends, a deadline that may prove difficult to meet. It is uncertain whether it has enough support in the Democratic-controlled House to pass.

The law would impose a 25 percent tax on sales of the drug, which would fund drug law enforcement and drug education programs. “It makes for a much more thoughtful and measured approach,” said Democratic State Senator Jeanette White, a sponsor of the senate bill. “We got to work out the details, we got to ask the questions first and put the whole infrastructure in place before it happens.”

Four states, Colorado, Washington, Oregon and Alaska, as well as the District of Columbia, have legalized marijuana through ballot initiatives, and voters in four more states, including neighboring Massachusetts, are to vote on legalization in November. The drug remains illegal under federal law.

Advocates contend the push for marijuana legalization across the nation will be boosted if the legislation is passed by the Democratic-controlled legislature of Vermont, the home of U.S. Senator Bernie Sanders, a socialist who is running for the Democratic presidential nomination.

Bills have been submitted in 16 other states, according to advocates, but none have advanced as far.

…A February poll of 895 state residents by Vermont Public Radio found that 55 percent of Vermonters supported legalization, with 32 percent opposed.

…A 2015 Rand Corp study commissioned by the state found that one in eight residents already use the drug illegally, with one in three people aged 18 to 25 doing so. The report estimated that users spent between $125 million and $225 million on the drug in 2014.

The high prevalence of marijuana use in the state has some lawmakers and even law-enforcement officials contending it’s time for the rules to catch up with reality.

“If it’s one in eight, to me that tells me that we need to change, that society for the most part is accepting it,” said Windham County Sheriff Keith Clark. “If 12 or 13 percent of the population is not being open with law enforcement when we’re out trying to investigate serious crimes, then that is holding us back from working with our communities.”

Supporters acknowledge that the bill will have a harder path to approval in the state’s House of Representatives, where many Republicans are wary of legalizing the drug.

“Many of our members are opposed to this proposal and I don’t know that it can be changed enough for them to change their minds,” said Representative Donald Turner, the House Republican leader. “I don’t feel there is a good argument for legalizing it at this point.”

Governor Peter Shumlin, a Democrat in his final year in office, asked lawmakers to pass the measure during this year’s legislative session, which ends in May.

Debby Haskins, executive director of opposition group Smart Alternatives for Marijuana-Vermont, noted that Vermont, like many U.S. states, is coping with a surge in addiction to opioid drugs, ranging from prescription painkillers to heroin.

She said she believed health officials needed to solve that problem before legalizing a new drug.

“The questions that keep coming up for me is, how will this make Vermont healthier and how will this improve the quality of life? I don’t think this bill does it,” Haskins said. “It’s the wrong direction for us to be heading.”

3. How does the Senate explain their vote in favor of legalizing recreational marijuana?

4. a) When is the deadline for the house to vote?
b) Why might this be difficult to meet?

5. a) In what states have voters passed ballot initiatives to legalize recreational marijuana?
CHALLENGE: Do a search to name the states that are to vote on legalization in November.

6. What effect will the bill’s passage by Vermont’s house have on the rest of the country, according to advocates (supporters)?

7. Debby Haskins of a group opposed to legalization of recreational marijuana noted that Vermont, like many U.S. states, is coping with a surge in addiction to opioid drugs, ranging from prescription painkillers to heroin. She said she believed health officials needed to solve that problem before legalizing a new drug.
a) Do you agree with Ms. Haskins? Explain your answer.
b) Ms. Haskins also said, “The questions that keep coming up for me is, how will this make Vermont healthier and how will this improve the quality of life? I don’t think this bill does it. It’s the wrong direction for us to be heading.”
What do you think: will this bill make Vermont healthier? will it improve the quality of life? Explain your answers.

8. Windham County Sheriff Keith Clark said, ”If it’s one in eight [residents who already use marijuana], to me that tells me that we need to change, that society for the most part is accepting it.”
Is this a good reason for legalizing the recreational use of marijuana?

For previous articles on the legalization of marijuana and the problems resulting from its use: