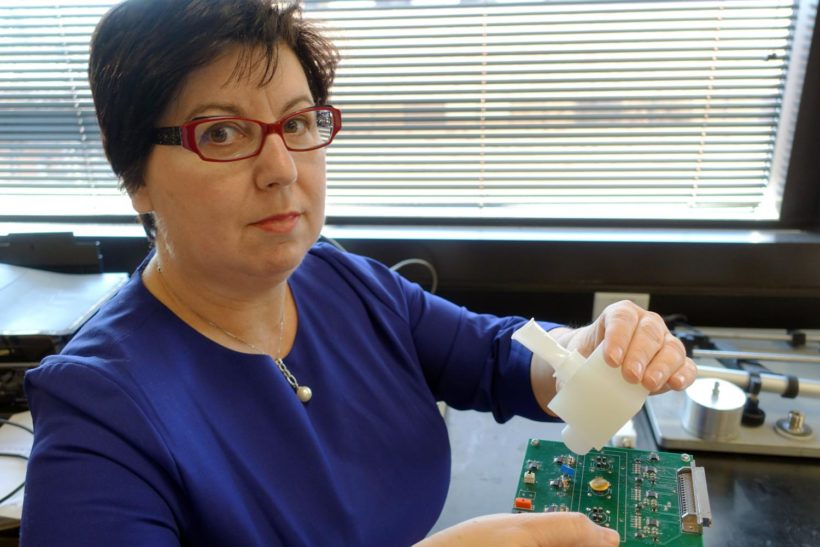 Perena Gouma, a professor in the UTA (The University of Texas at Arlington) Materials Science and Engineering Department, has published an article in an academic journal that describes her invention of a hand-held breath monitor that can detect the flu virus. (Photo: UT Arlington)

The article, published in January 2017, explains in-depth how the single-exhale sensing device works and the research involved in its creation, which was funded by the National Science Foundation through the Smart Connected Health program.

Gouma’s device is similar to the breathalyzers used by police officers when they suspect a driver of being under the influence of alcohol. A patient simply exhales into the device, which uses semiconductor sensors like those in a household carbon monoxide detector.

The difference is that these sensors are specific to the gas detected, yet still inexpensive, and can isolate biomarkers associated with the flu virus and indicate whether or not the patient has the flu. The device could eventually be available in drugstores so that people can be diagnosed earlier and take advantage of medicine used to treat the flu in its earliest stages. This device may help prevent flu epidemics from spreading, protecting both individuals as well as the public health.

Gouma and her team relied on existing medical literature to determine the quantities of known biomarkers present in a person’s breath when afflicted with a particular disease, then applied that knowledge to find a combination of sensors for those biomarkers that is accurate for detecting the flu. For instance, people who suffer from asthma have increased nitric oxide concentration in their breath, and acetone is a known biomarker for diabetes and metabolic processes. When combined with a nitric oxide and an ammonia sensor, Gouma found that the breath monitor may detect the flu virus, possibly as well as tests done in a doctor’s office.

“I think that technology like this is going to revolutionize personalized diagnostics. This will allow people to be proactive and catch illnesses early, and the technology can easily be used to detect other diseases, such as Ebola virus disease, simply by changing the sensors,” said Gouma, who also is the lead scientist in the Institute for Predictive Performance Measurement at the UTA Research Institute.

“Before we applied nanotechnology to create this device, the only way to detect biomarkers in a person’s breath was through very expensive, highly-technical equipment in a lab, operated by skilled personnel. Now, this technology could be used by ordinary people to quickly and accurately diagnose illness.”

Stathis Meletis, chair of the Materials Science and Engineering Department, noted that Gouma’s research shows how UTA’s nanotechnology research can have a profound impact on health and the human condition in our communities, as outlined in the University’s Strategic Plan 2020: Bold Solutions | Global Impact.

“Dr. Gouma’s development of a portable, single-exhale device that can be used to detect diseases has implications far beyond the laboratory,” Meletis said. “This shows the impact of nanotechnology on our everyday lives, and has potential for applications related to security and other important areas as well.”

Gouma joined UTA in 2016 after spending 16 years at SUNY Stony Brook. She earned more than $6 million in research funding from federal and state agencies, such as the National Science Foundation, the Environmental Protection Agency and the Department of Defense. She is a member of the National Academy of Inventors, was a Fulbright Scholar and earned the prestigious Richard M. Fulrath Award from the American Ceramic Society.

Reprinted here for educational purposes only. May not be reproduced on other websites without permission from UTA News. For the original article, go to uta.edu/news.

1. Define biomarker and nanotechnology as used in the article.

3. How does Dr. Gouma’s invention work? What current devices is it similar to?

4. What is the potential for Dr. Gouma’s device? (And how does Dr. Gouma explain its potential?) Be specific.

5. How did Dr. Gouma and her team determine the biomarkers needed to detect the flu? Be specific.

6. In addition to Dr. Gouma’s research, for what additional uses have the UTA engineering faculty applied nanotechnology?

7. In what way does this article inspire you?